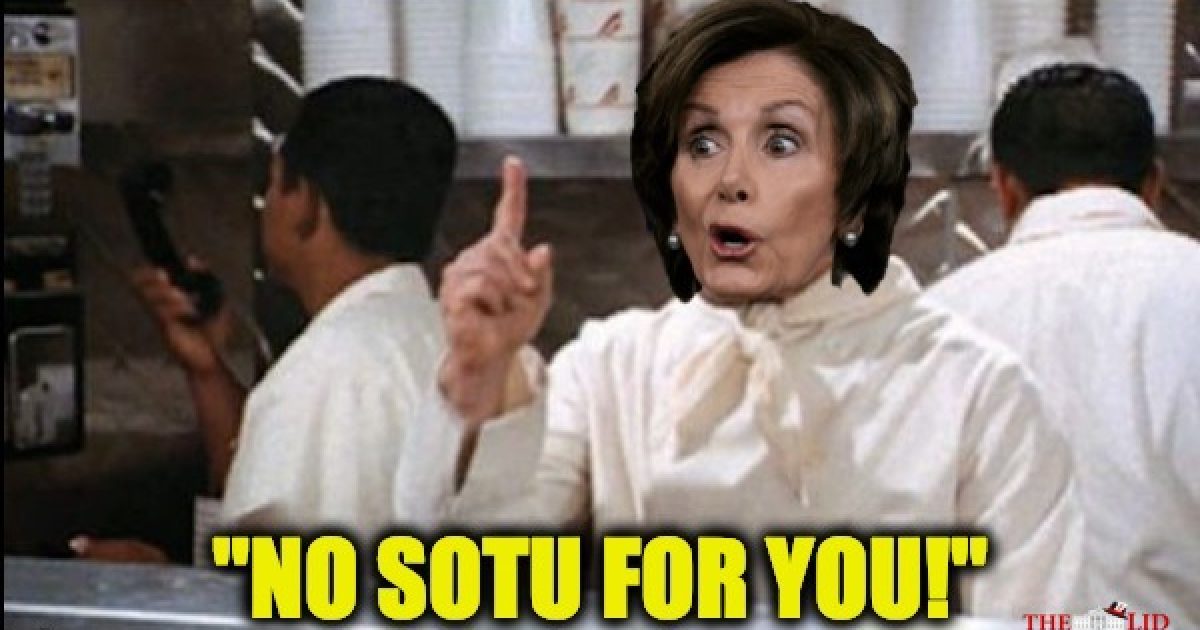 Kellyanne Conway called it! Appearing on Fox News she said, I think it would be remarkably petty of the speaker to disinvite the president of the United States to address the nation that they both serve at the highest level,”  Well, petty thy name is Nancy Pelosi. Responding to a letter the sent by President Trump earlier in the day, Pelosi said she will block President Trump from delivering the State of the Union Address in the House chamber as planned on Jan. 29. Her letter to Trump saying she would not move forward with the necessary legislative steps needed for the address to take place:

When I extended an invitation on January 3rd for you to deliver the State of the Union address, it was on the mutually agreed upon date, January 29th. At that time, there was no thought that the government would still be shut down.

In my further correspondence of January 16th, I said we should work together to find a mutually agreeable date when government has re-opened and I hope that we can still do that.

I am writing to inform you that the House of Representatives will not consider a concurrent resolution authorizing the President’s State of the Union address in the House Chamber until government has opened.

Again, I look forward to welcoming you to the House on a mutually agreeable date for this address when government has been opened.

This is the latest move by Pelosi who not only objects to a fence being built on parts of our southern border with Mexico but refuses to negotiate a solution. It does prove, however, that her first excuse to delay the SOTU (security) was a lie.

Earlier in the day, the President wrote a letter to Pelosi accepting her invitation to deliver The State Of The Union Address assuring there was no security issue

Thank you for your letter of January 3, 2019, sent to me long after the Shutdown began, inviting me to address the Nation on January 29th as to the State of the Union. As you know, I had already accepted your kind invitation, however, I then received another letter from you dated January 16, 2019, wherein you expressed concerns regarding security during the State of the Union Address due to the Shutdown. Even prior to asking, I was contacted by the Department of Homeland Security and the United States Secret Service to explain that there would be absolutely no problem regarding security with respect to the event. They have since confirmed this publicly.

I look forward to seeing you on the evening on January 29th in the Chamber of the House of Representatives. It would be so very sad for our Country if the State of the Union were not delivered on time, on schedule, and very importantly, on location!

Before his meeting on border protection on Wednesday afternoon, Trump spoke to the press and said Pelosi canceled the State Of The Union because she can’t handle the truth.  He added that they are looking at different locations for the SOTU. Watch his full statement on the video below: