Don't Look At Those Illegals Behind The Curtain! 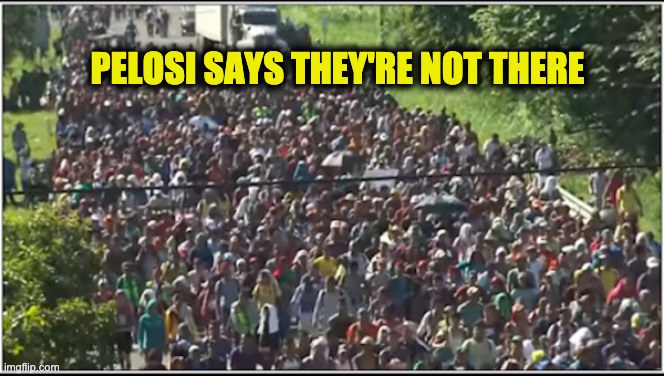 There’s insanely delusional, and then there’s this.  On Friday, Fox News reported that House Speaker Nancy Pelosi, D-Calif., told reporters during her weekly press briefing that when it comes to the situation at the southern border, “lyin Joe Biden”  has everything — and we quote — “under control.”

“The Biden administration has this under control,” she said. “It is change, and it will take some time, but it is values-based, humanitarian … [and] pragmatic with a plan to get things done.”

Don’t just take our word for it.  Here’s a video of her saying it as posted to Twitter by The Hill:

Speaker Pelosi on the border: "Biden administration has this under control. It has changed and it'll take some time." pic.twitter.com/ed4HA1tqI4

Translation: Don’t believe your lying eyes.  Also, don’t believe what the boots on the ground are saying.  And no, these AREN’T the illegal immigrants you’re looking for.  Okay, I admit it, I borrowed that last sentence from a familiar Star Wars scene.

Still, we could almost see her waving her hand as she attempts to distract the entire country with her Jedi powers…

She said the Biden team is addressing the immediate concerns at the border, developing “more humane” ways to care for the migrant children and tackling the source of the problem in the migrants’ Central American home countries.

Biden has a plan and “not just a diversionary tactic on the part of the Republicans because they are bankrupt of ideas,” Pelosi said.

She said Congress is prepared to invest in the Northern Triangle countries — El Salvador, Guatemala and Honduras — to improve the lives of the people who are seeking to flee to the United States.

“Yes, it will take some resources — a small price to pay for people to stay home,” Pelosi added.

Right…  Just throw billions or trillions more of our hard-earned tax money away in hopes these countries will do the job they should already be doing.

Sorry, Nancy.  We’re not buying it.  Everyone can see that Biden does NOT have the situation under control.  At all.  He can’t even remember Kamala Harris’ current position.

Apparently Pelosi thinks that the border crisis is Trump’s fault and he handed down a broken system.

The border was strong and secure when Trump left office. We were stopping illegal immigrants BEFORE they crossed.

He PROTECTED the American people.