The Democrats Fought Against A Peaceful Transfer Of Power In 2016 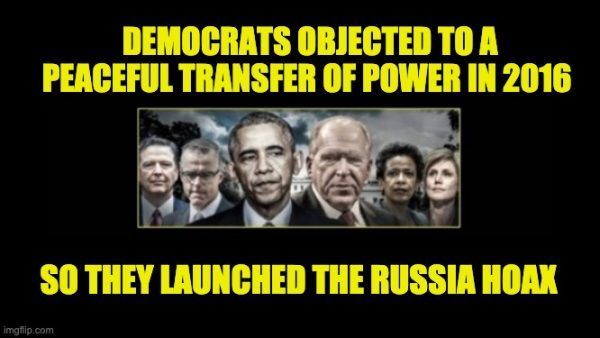 The liberal media has been having a cow because when the President was asked if he will commit to a peaceful transfer of power  (God Forbid!), if he should lose the vote to Joe Biden, the POTUS declined to answer that hypothetical question. Instead, he spoke about the very legitimate possibility the mass mailing of ballots will screw up the vote and not reflect the choice of the American people.

After the 2016 vote, the Obama Administration, the DOJ, and the FBI refused to allow a peaceful transfer of power. Instead, they created the Russia hoax to reverse the election. After almost four years of covering up the truth, we are finally learning about their efforts to stop Donald Trump from taking over as President, even after being inaugurated.

Just in the past twenty-four hours, we learned that during the supposed transition, FBI agents working on the Russia hoax were worried that what they were doing was illegal, and they were going to get sued for what they were doing. They were so concerned they bought insurance to protect themselves.

“[W]e all went and purchased professional liability insurance,” one agent texted on Jan. 10, 2017, the same day CNN leaked details that then-President-elect Trump had been briefed by Comey about the bogus Christopher Steele dossier. That briefing of Trump was used as a pretext to legitimize the debunked dossier, which was funded by the Democratic National Committee and the Clinton campaign and compiled by a foreign intelligence officer who was working for a sanctioned Russian oligarch.

(…) Agents also said they were worried about how a new attorney general might view the actions taken against Trump during the investigation.

But they lucked out because Trump selected Jeff Sessions, who was forced by the Democrats to recuse themselves.

Speaking of the Steele dossier, we learned that before the 2016 election (August), the FBI knew that the source who provided the bogus information to Christopher Steele was believed to be a Russian Spy.  Per Sen. Lindsey Graham, the FBI knowingly withheld the truth from the FISA Court:

“So there’s some people tonight that have to be very worried, because now we know the FBI — in December 2016 — knew that the dossier was being prepared by a Russian agent. They never told the court.”

(…) And interviews conducted with the source in January and March of 2017 Steele’s source to the FBI the information contained in the anti-Trump dossier was unreliable.

The FBI knew the dossier was bogus and came from a possible spy. However, they still used the false claims in the document about ties between Trump, his campaign, and Russia to secure FISA warrants against Carter Page, and to launch an investigation of the Trump campaign.

On September 17, FBI agent William J. Barnett a member of the Muller Team assigned to investigate General Flynn,  was interviewed by Assistant U.S. Attorney for the Eastern District of Missouri Jeffrey Jensen. Basically, his testimony was that there was no foundation for the Russiagate investigation and that it was only being done to hurt the President.

The 302 document of that interview revealed Mr. Barnett believed, “the FBI’s Trump-Russia probe was ‘opaque” and “with little detail concerning specific evidence of criminal events.'” In other words, there was no there—there. And after six weeks on the Mueller team, he “still unsure of the basis of the investigation concerning Russia and the Trump campaign working together, without a specific criminal allegation,” and “Barnett believed the prosecution of Flynn by Mueller’s office was used as a means to ‘get Trump.'”

For more on the latest Russia Hoax news discussed above, Ed Morrissey has two must-read articles on Hot Air:

FBI Agent: Mueller Team Had A “Get Trump” Attitude On Case Built On “Supposition Upon Supposition”