Guess Which Gov’t Department Does NOT Receive Adequate Spending In His Bloated Budget? 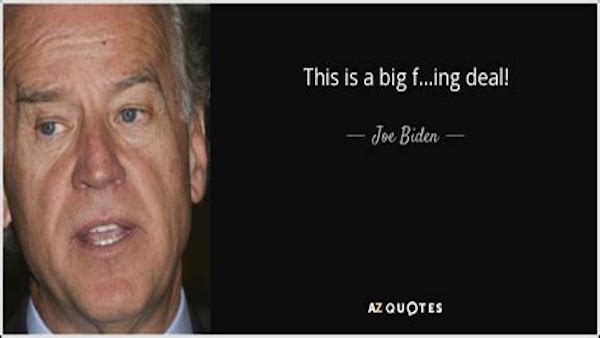 For a guy who posed as being so passionate about the issue, he sure isn’t interested in putting any money where his mouth is. In fact, it seems to be the ONLY place Joe is NOT willing to drop boatloads of cash. Perhaps he just believes in the exact opposite of the successful defense policies of Ronald Reagan and Donald Trump. Instead of peace through strength,  Biden’s policy is peace through weakness. peace through weakness.

Joe cares says he cares deeply about the military. We know this because it was one of his talking points, and the discredited story about Russian bounties was part of his manufactured outrage and faux patriotism that was weaponized in the campaign.

His son Beau — did you know he served in the military? — was often invoked in those few Campaign speeches he gave last year. In particular, that son was the lightning rod of boundless righteous anger Joe felt for how President Trump had somehow wronged and disgraced those who served.

Forget the role Trump had in fixing the VA or funding the cash-starved military budget, or being the first President since Reagan to NOT initiate a new war, or how he was winding down the ‘endless wars’ we had been engaged in overseas, or how he destroyed the Caliphate that had flourished under Obama, or the Abraham Accords (which Biden’s people refuse to mention by name)

Joe was incensed by the Russian bounties (that never happened) and Trump’s mean tweets. This same Joe Biden that wanted to slap General Flynn with a BS Logan Act violation has thoughts on how the military is treated?

Let’s see how well he puts that money where his mouth was.

Speaking with host Mackenzie Eaglen of AEI, former Acting Undersecretary of Defense Comptroller Elaine McCusker said bluntly, “Defense is not a Biden administration priority, and there is an attempt to redesign what constitutes a national security investment, to divert defense funds to non-Corps activities.”

“Why do I say this?” she continued. “We got previews of this fact with the international security guidance earlier this year, which actually didn’t terribly focus on defense; and in early April, with the discretionary budget top-lines. For example, the OMB press release did not even mention defense.”

Citing statistics to show the direction the Biden administration was taking, she said, “And defense was the only federal function to not even keep pace with inflation. While domestic agencies went up by 16%, including a 41% increase for the Department of Education, also of note, the only federal agency to take a cut, at 10% was the Corps of Engineers.”

Having the Defense budget lose ground to inflation — how big a deal is that, really?

President Joe Biden’s $6 trillion budget proposal puts money toward universal pre-K and cracking down on the fossil fuel industry but shrinks the Navy’s budget for weapons procurement and building warships, leaving it at severe risk in a potential showdown with China.

The Biden budget—released on the eve of Memorial Day weekend—makes major cuts to the Navy in some of its most needed areas, such as building equipment and training sailors. The Navy will need to reckon with a more than 5 percent drop in shipbuilding dollars and the decommissioning of 11 combat-ready ships, including 4 advanced warships.

At least it’s not as though we have anything to fear from China, do we?

Let’s recap — China is likely to attack an ally we’ve sworn to protect sooner rather than later. Our wargames simulations did NOT go as planned. China is bragging about building enough ships every year to match the total tonnage of the entire French Navy, and their official mouthpieces have openly made reference to their nuclear deterrent abilities.

And Joe DARES to complain about how ‘un-American’ the other team is when the one thing he cannot justify providing funding for is *checks notes* the Constitutionally mandated responsibility of providing for the common defense.

Well, that DOES line up failure to defend national interest with his deliberately open borders policy. As former defense secretary for presidents Bush #43 and Obama wrote in his memoir, Bide has been “wrong on nearly every major foreign policy and national security issue over the past four decades.”  America may be screwed as Biden may be consistently WRONG, but at least he is consistent.