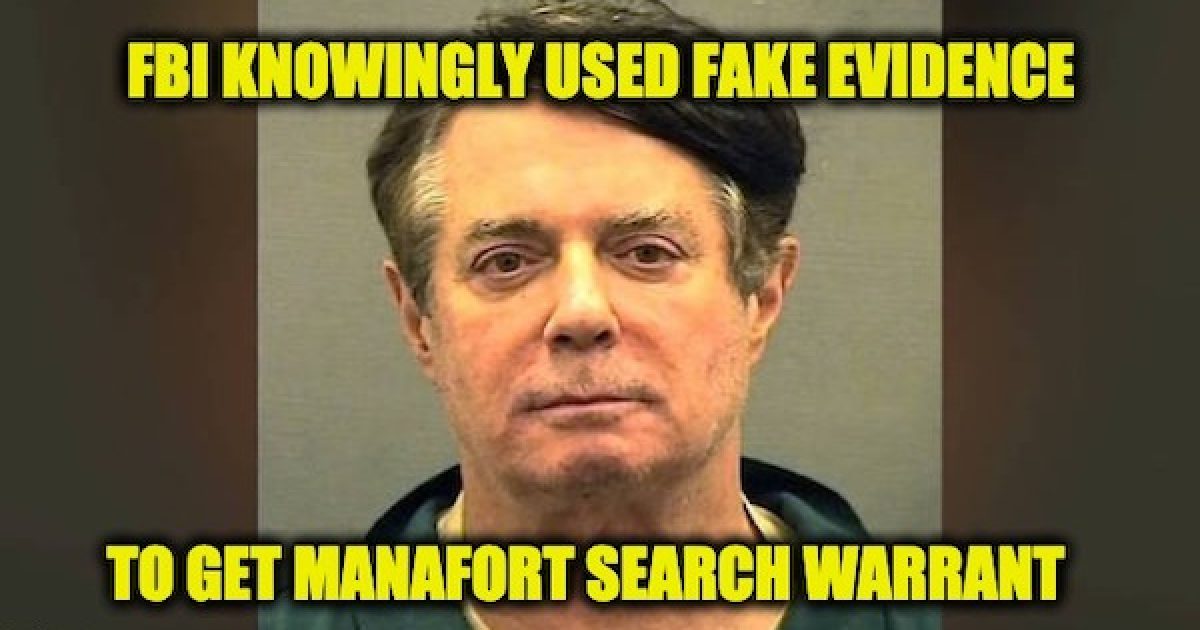 The second document, known as the “black cash ledger,” remarkably has escaped the same scrutiny, even though its emergence in Ukraine in the summer of 2016 forced Paul Manafort to resign as Trump’s campaign chairman and eventually face U.S. indictment.

In search warrant affidavits, the FBI portrayed the ledger as one reason it resurrected a criminal case against Manafort that was dropped in 2014 and needed search warrants in 2017 for bank records to prove he worked for the Russian-backed Party of Regions in Ukraine.

There’s just one problem: The FBI’s public reliance on the ledger came months after the feds were warned repeatedly that the document couldn’t be trusted and likely was a fake, according to documents and more than a dozen interviews with knowledgeable sources.

When the NY Times reported the news about the ledger, they positioned it as a big scandal as they do with almost everything associated with Donald Trump:

(…) The papers, known in Ukraine as the “black ledger,” are a chicken-scratch of Cyrillic covering about 400 pages taken from books once kept in a third-floor room in the former Party of Regions headquarters on Lipskaya Street in Kiev. The room held two safes stuffed with $100 bills, said Taras V. Chornovil, a former party leader who was also a recipient of the money at times. He said in an interview that he had once received $10,000 in a “wad of cash” for a trip to Europe.

Nazar Kholodnytsky, Ukraine’s top anti-corruption prosecutor, told John Solomon that he had told his State Dept contacts and FBI agents that his colleagues who found the ledger thought it was bogus around the same time the Times published the story late August 2916.

“It was not to be considered a document of Manafort. It was not authenticated. And at that time it should not be used in any way to bring accusations against anybody,” Kholodnytsky said, recalling what he told FBI agents.

This is the second incident of Obama’s State Department ignoring Ukraine evidence. Two months ago we learned that senior member of Ukraine’s Prosecutor General’s International Legal Cooperation Dept. told John Solomon that since last year, he’s been blocked from getting visas for himself and a team to go to the U.S. to deliver evidence of Democratic party wrongdoing during the 2016 election to the DOJ.  The senior prosecutor Kostiantyn Kulyk never got an answer, and he says it’s because the visas were blocked by the U.S. Ambassador. The Ambassador, Marie L. Yovanovitch is a career diplomat (since 1986) who served under both Democratic and Republicans and was appointed to her present position in August 2016 by former President Obama.

Solomon gives some more examples of the FBI being told the ledger was as real as a three-dollar bill. But that’s when it gets really dicey because according to three of Solomon’s sources, Mueller’s team of political hitmen and the FBI were given copies of one of the warnings.

Because they knew the ledger was false Mueller and the FBI couldn’t use the ledger to establish probable cause to investigate Manafort because it ” would require agents to discuss their assessment of the evidence — and instead cited media reports about it.” Even though the feds assisted on one of those stories as sources

For example, agents mentioned the ledger in an affidavit supporting a July 2017 search warrant for Manafort’s house, citing it as one of the reasons the FBI resurrected the criminal case against Manafort.

“On August 19, 2016, after public reports regarding connections between Manafort, Ukraine and Russia — including an alleged ‘black ledger’ of off-the-book payments from the Party of Regions to Manafort — Manafort left his post as chairman of the Trump Campaign,” the July 25, 2017, FBI agent’s affidavit stated.

Three months later, the FBI went further in arguing probable cause for a search warrant for Manafort’s bank records, citing a specific article about the ledger as evidence Manafort was paid to perform U.S. lobbying work for the Ukrainians.

“The April 12, 2017, Associated Press article reported that DMI [Manafort’s company] records showed at least two payments were made to DMI that correspond to payments in the ‘black ledger,’ ” an FBI agent wrote in a footnote to the affidavit.

Guess who helped the AP with their story—the DOJ’s Andrew Weissmann who later moved to the special prosecutor’s office and became Mueller’s chief hit-man.

So just as they had done in the anti-Trump investigation “the FBI cited a leak that the government had facilitated and then used it to support the black ledger evidence, even though it had been clearly warned about the document.”

Whether or not Paul Manafort deserved to be jailed is irrelevant. Part of the search warrants against him were lies that the prosecutors knew were false. The judgments against him should be tossed out because they contain the fruit of the poisonous tree. Our justice system promises equal justice for all, but the FBI and Special Prosecutor cheated in the case of Manafort.

There is much more to John Solomon’s report. I recommend you click here and give it a read.