NYT’s Patrick S. Tomlinson, ‘There Is Not A Single Good Person Who Voted For Trump’ 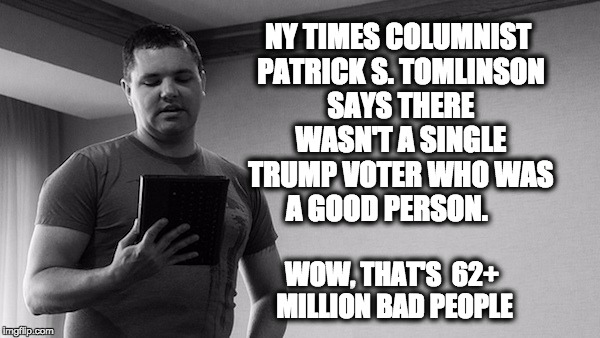 I guess that era of Kumbaya is officially over. Most of the post below was written by my friend Joe Newby, and appeared on his website Conservative Firing Line. I have made some changes to match my snark which you will recognize, but most of the work and research was done by Joe.

On Sunday, Patrick S. Tomlinson, a contributor to the New York Times, did his part to foment hate and violence against some 62+ million Americans when he declared that not one singe good person voted for Donald Trump.

“There is not a single good person who voted for Trump. Not one,” he said on Twitter. 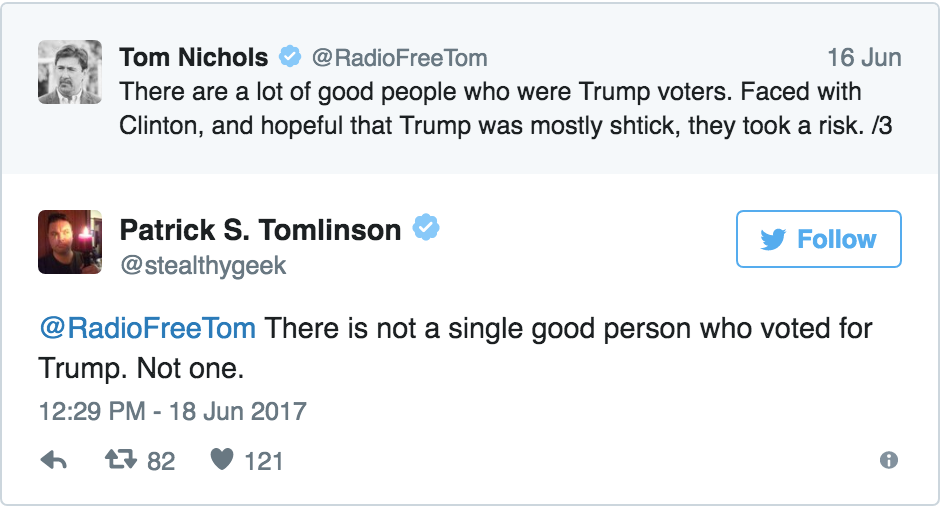 Wow, that means there are 62,984,825 bad people in America. Did he meet all of them? How does he know each and every Trump voter was bad?  Maybe he asked Santa, after all he knows whether everyone’s been naughty or nice.

Not everyone agrees with Patrick S. Tomlinson: 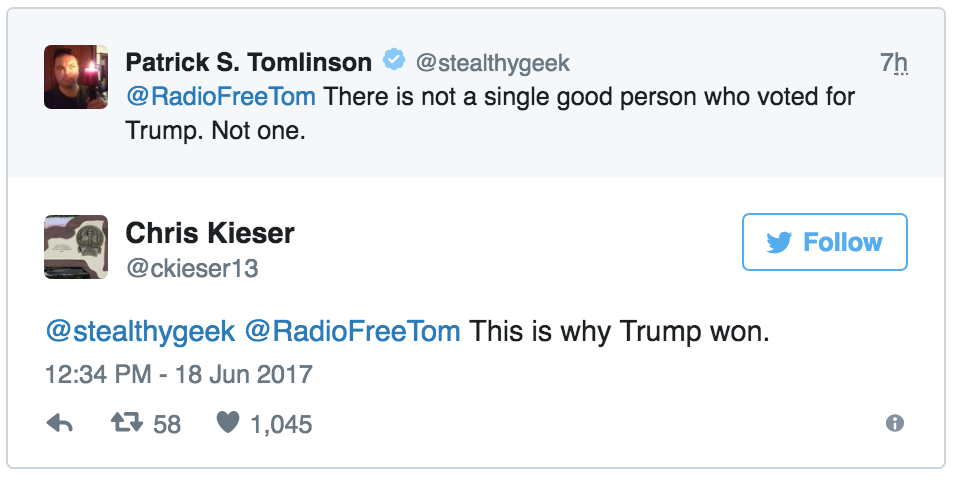 Tomlinson doubled down and falsely claimed that Trump was “installed via a foreign-led coup.” 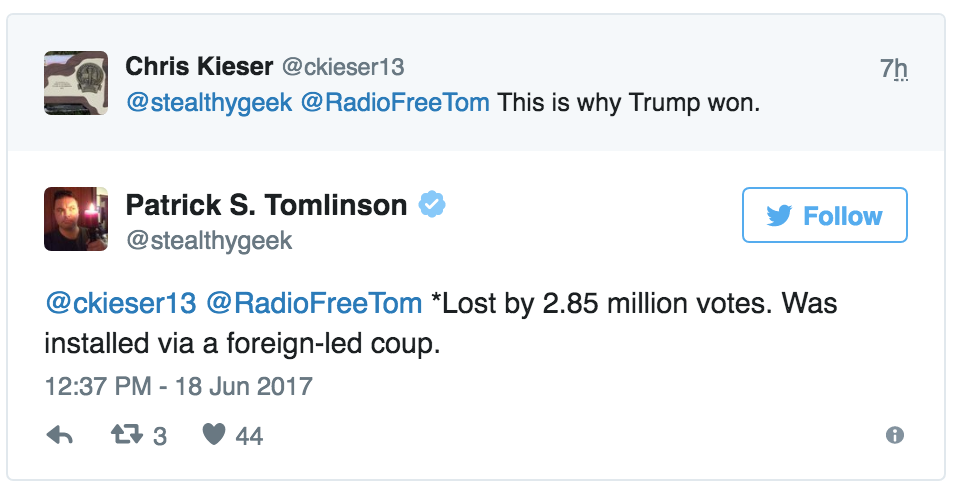 Trump lost California by 4.3 million votes, won the rest of the country by 1.45 million votes, so I guess that means everyone who lives outside of California is a foreigner. Personally I would suggest it’s the other way around.

My friend Kurt Schlichter had a different response 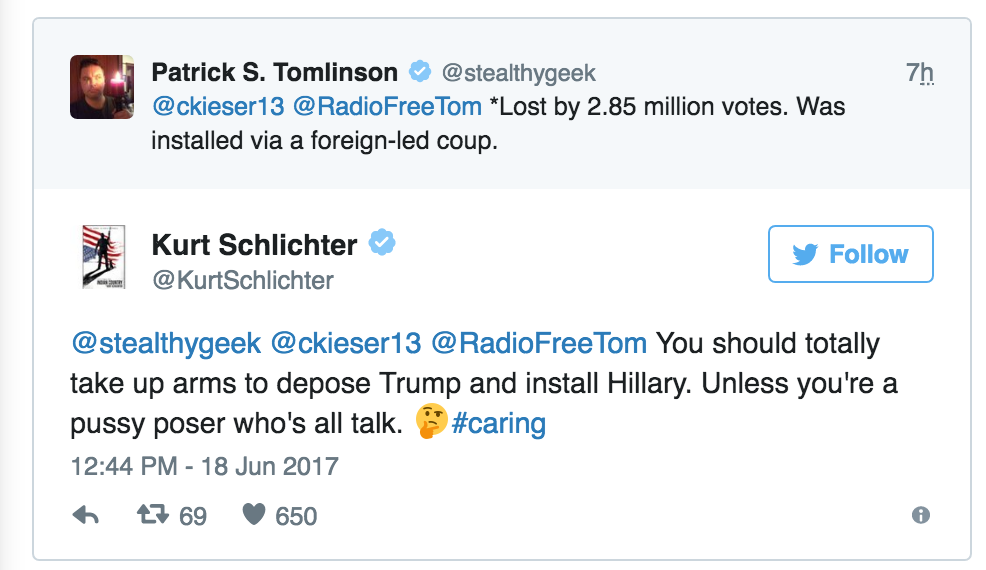 Kurt, we get it…but perhaps you shouldn’t give Tomlinson any ideas.

Thankfully rather than take Kurt’s advice the NY Times contributor shot back. 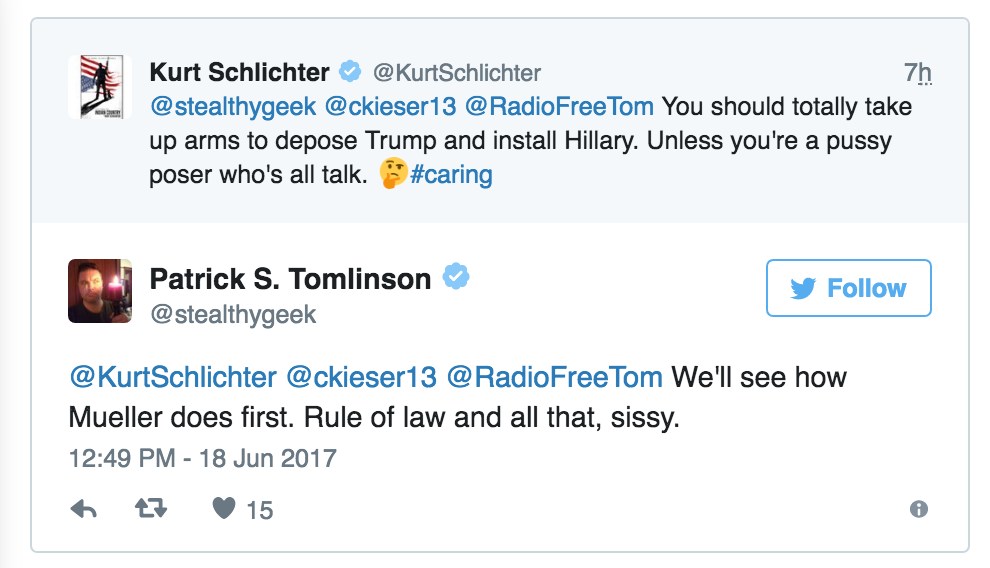 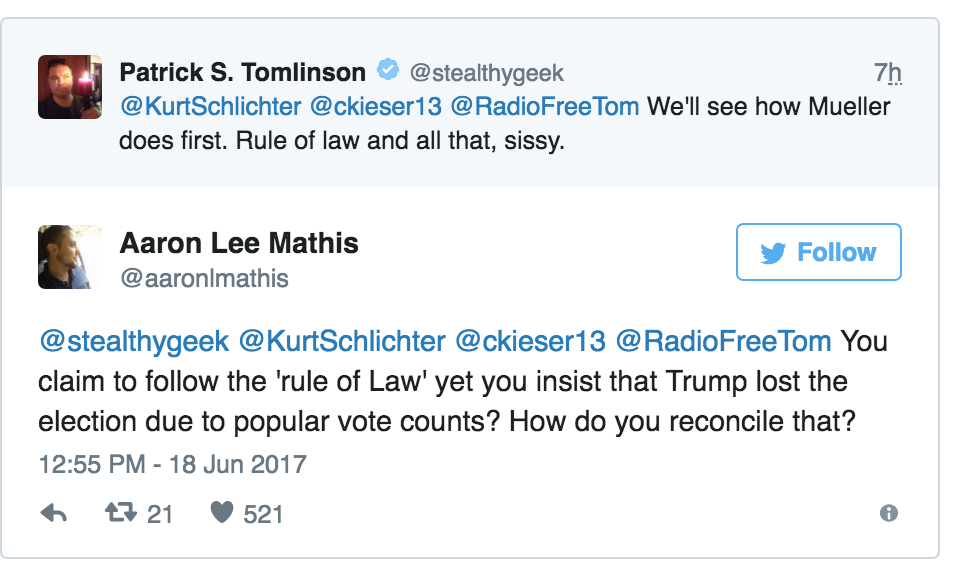 Actually he can’t reconcile that, not if he read the constitution, because presidents aren’t chosen by the popular vote, only the Electoral College.  But that apparently doesn’t matter to some, especially liberals named Patrick S. Tomlinson who write for the New York Times.

The video prompted Tomlinson to rely on a liberal favorite, the Nazi card. 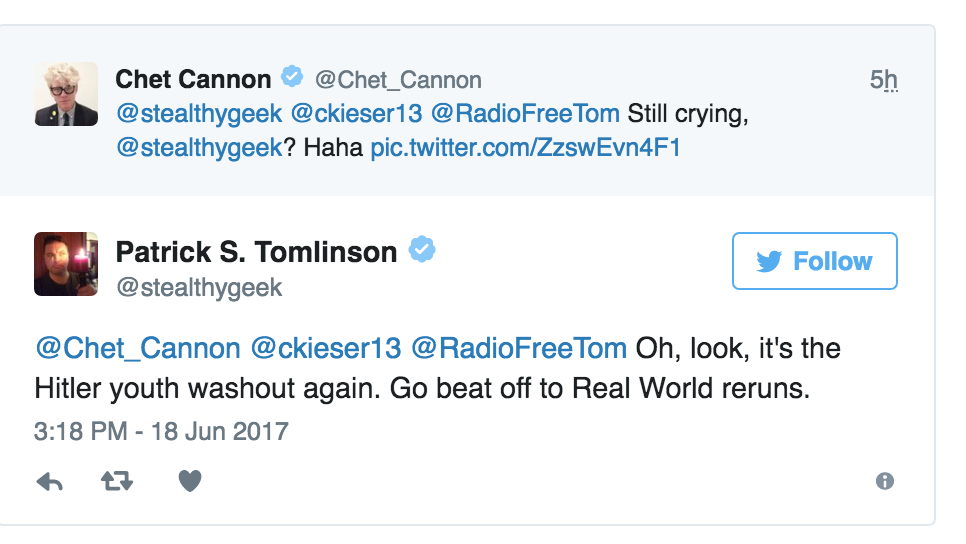 NOW I UNDERSTAND. All the people who voted for Trump bad because they are Nazis (please don’t tell my Rabbi). 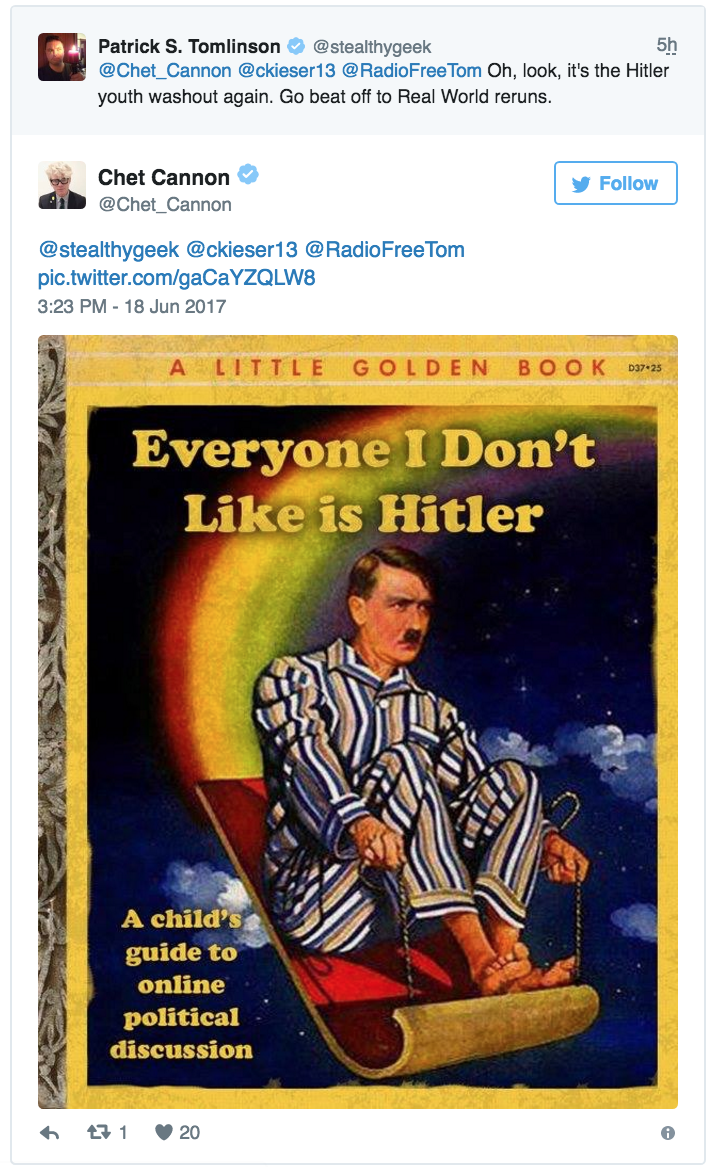 Of course, this is the kind of liberal nonsense that led James Hodgkinson to shoot Rep. Steve Scalise in an effort to mass murder Republicans.  It’s also the kind of idiocy that’s dividing America which hate-mongers like Patrick S. Tomlinson  apparently want. 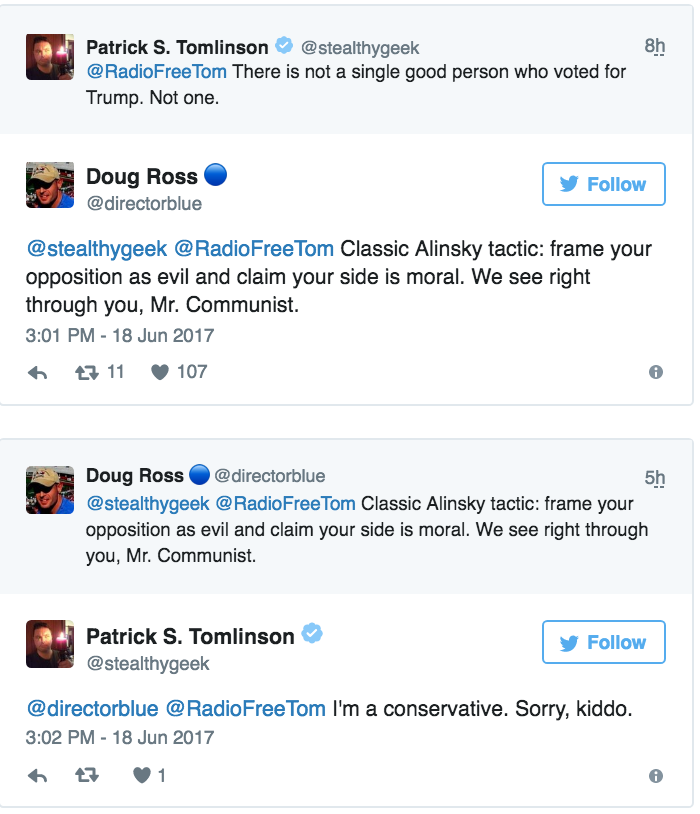 Of course he is conservative…just like Jeff Dunetz has a full head of hair. Or:

If you’re a conservative, rainbow soft-seve comes out of my unicorn’s butt! pic.twitter.com/n2JeV1xloU

Is it just me, or have you noticed that Trump-haters like Tomlinson are so brave online, when they can hide behind their keyboards? Actually in the case of me, Jeff Dunetz, he has even hidden his twitter feed. Most of the tweets above are posted as pictures rather than embedded because I’m blocked from his twitter.

Our response to Patrick S. Tomlinson ? 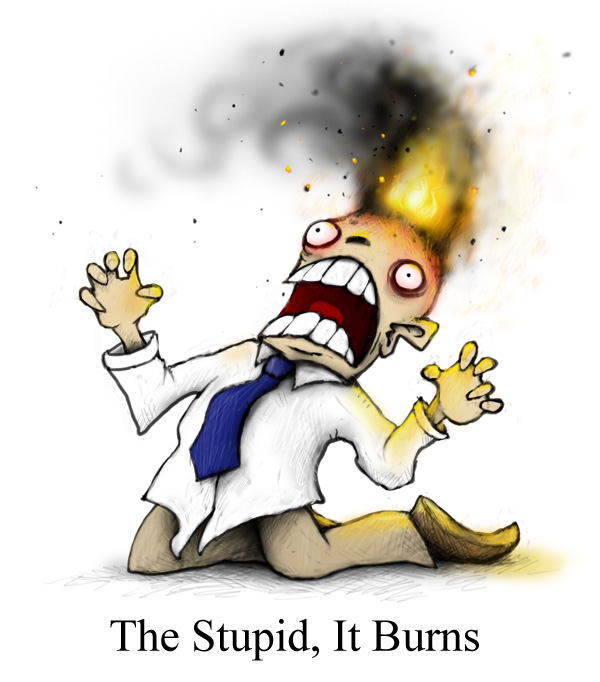