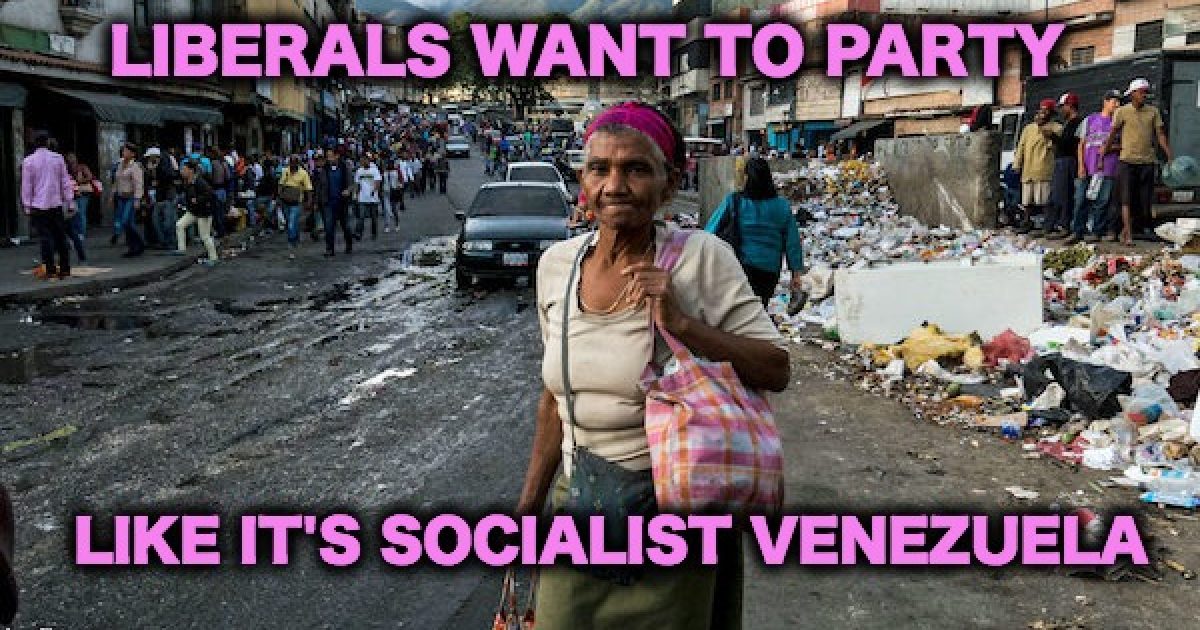 When you see Bernie Sanders, remember Venezuela. When you look at Elizabeth Warren, think Caracas. When you look at Alexandria Ocasio-Cortez, think of the plight of those poor people fleeing Venezuela by the hundreds of thousands—just so they can eat.

That may seem a little harsh. But the fact is that Venezuela went from one of the most prosperous countries south of the border to be a complete basket-case because of socialistic policies. And American leaders should learn from Venezuela and tone down the pro-socialism rhetoric.

Despite the realities of daily life in Caracas, precisely because of socialism, a new survey just released found that among Democrats, socialism is to be preferred over capitalism. The new report by Frank Newport issued by Gallup Polls (8/13/18) declares that Democrats are more positive about socialism (57 percent) than they are capitalism (47 percent).

Perhaps more disturbing is that many young people also state they prefer socialism to capitalism—but, as Dr. Frank Wright, head of D. James Kennedy Ministries, points out, these same people will glance down at their I-phones and Androids and other marvels of technology that capitalism produced. Newport notes: “Americans aged 18 to 29 are as positive about socialism (51%) as they are about capitalism (45%)…a marked shift since 2010, when 68% viewed [capitalism] positively.”

This is astounding. Capitalism is a proven winner. Socialism is a proven failure. We don’t have to look to other hemispheres to see that. We have seen it in Cuba for five decades. Now we know that nightmare is being relived in Venezuela.

France24.com (8/14/18) reports that, according to the U.N., 2.3 million people have fled Venezuela merely so they can find food. Furthermore, it is becoming less safe medically: “Diseases that had been eradicated such as measles, malaria, tuberculosis, and diphtheria have reappeared and are on the rise.” What a human tragedy.

Music minister John Moore lived in Venezuela performing in one of that nation’s symphony orchestras in the early 1980s. This was during the days of prosperity, long before the days of socialism. He told me: “There’s just no sadder or more visible testimony of the ravages of socialism than what has happened to the country of Venezuela in the past 10 or 15 years.”

He added, “When I was there, the oil companies were still being run by the Venezuelan government with the assistance of American oil companies; and so oil production flowed. People lived in a government that had been stable for 120 years. The currency, the bolivar, was 4.3 to the dollar for over 25 years.”

But then came the siren song of socialism, and tragically many of the people fell for the communistic rhetoric of Hugo Chavez who turned that country towards socialism.

Today the bolivar is not even remotely close to 4.3 for one U.S. dollar. Venezuela is now experiencing one million percent inflation—that’s the worst inflation in the world. And since 2012, the currency has lost 99% of its value. Last year, the inflation was up 2,600%. Everywhere, there are long lines for food and necessities.

As of this writing, the UK Guardian reports that it costs 14 million Venezuelan bolivars to buy a single chicken.

Moore says of Hugo Chavez, the dedicated communist who turned Venezuela in the wrong direction: “In his desire to equalize the society…[he] didn’t attack the super-rich, he attacked the middle class. He took their money.” And the result? “Just complete economic ruin.”

All the promises of socialism in Venezuela have turned out to be lies—bringing destitution, suffering to most of the population, and death to some—and increasing power to those in control. Up until his death, strongman Chavez insisted that socialism was not only democratic but also Christian. There is nothing Christian about encouraging covetousness of your neighbor’s goods and then stealing them (even though government intermediaries). Ironically, it was reported several years ago that among the wealthiest people in Venezuela is the daughter of Hugo Chavez.

The suffering in Venezuela illustrates how the socialistic promises of free stuff for everyone means that the resources have to be taken by the authoritarian hand of the state. At the end of the day, it just doesn’t work. It never works. It never has. How can people keep falling for the socialist rhetoric?

Recently, I interviewed John Tamny of FreedomWorks on the radio about Venezuela and economics. He said of the Democrats who tout socialism: “If they actually had to live under socialism, they would hate it.” And he added, “Only in economics textbooks do we consume our way to prosperity.”

I hope that run-of-the-mill Democrats will wake up to the realities of how bad socialism is for everybody (except for the small elite who run the economy) before it’s too late.