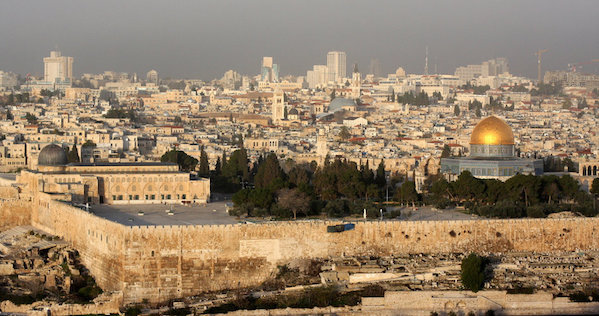 Presidential Candidates since Bill Clinton have promised to move the United States embassy in Israel to Jerusalem, but not one has followed kept the promise once they took office.  All indications are that when he moves into the White House, Donald Trump will keep his promise and move the U.S. Embassy to Israel’s capital city, Jerusalem. But the “moderate peace partners” of the Palestinian Authority are threatening Trump that they will react with violence if the U.S. Embassy is moved to Israel’s capital. The question is will their threats stop Trump from making the move?

The Palestinian Authority’s supreme Sharia judge and President Abbas’ advisor on religious affairs, Mahmoud Al-Habbash declared on during Friday prayers that a move of the embassy would be considered “a declaration of war” on all Muslims.  His sermon was broadcast live on Palestinian TV with PA President Abbas in the audience.

According to the translation published by Palestinian Media Watch, Al-Habbash said moving the embassy to Jerusalem “harms” Muslim faith, and then threatened: ”

“The new American administration intends to transfer its embassy to Jerusalem. In a simple, calm, and rational manner, in clear words that need no explanation and which are unambiguous: Such a step, for every Muslim, is a declaration of war on all Muslims. It’s a declaration of war on all Muslims. We are no one’s enemies, and we do not want to be. We are not enemies of the US and we do not want to be. However, when something harms our faith and our existence, we cannot stand by and do nothing. We will not agree to this under any circumstances. This will not pass in silence… The entire Muslim world will not accept it, and the entire Christian world will not accept it. Occupied Jerusalem is our eternal capital, the capital of our existence and the capital of our state. In politics there can be compromises here and there… In politics there can be negotiation. However, in matters of religion, faith, values, ethics, and history, there can be no compromises. Therefore, it isn’t possible to compromise on or negotiate over Jerusalem. This of course does not mean that we will prevent anyone from considering Jerusalem their direction of prayer. Our Jerusalem will remain open to all believers as it has been. Open to all of the monotheists.”

From the sound of it Al-Habbash isn’t a big believer in the Qur’an which refers to the existence of both temples in verse 17:7. In this passage, the Qur’an deals with God’s punishment of the Children of Israel for their transgressions:

(We permitted your enemies)
To disfigure your faces,
And to enter your Temple
As they had entered it before,
And to visit with destruction
All that fell into their power.

They worked for him
As he desired, (making) Arches,
Images, Basons
As large as wells,
And (cooking) Cauldrons fixed
(In their places)

These threats may represent the first test of Donald Trump’s resolve in foreign affairs. Will the Palestinian Authority attempts to blackmail the Trump Administration deter his plans to move the embassy?

It is very doubtful that the Palestinian incitement will deter or delay moving the embassy. Donald Trump is not the type to be intimidated, especially when one considers his campaign positions and not necessarily his positions about the Middle East. This is the man who has been promising to stand up to China, to force Mexico to pay for the border wall. Justifiably Trump criticized Barack Obama for not standing up to foreign threats and making the United States appear weak. If Trump was honest in his criticism of Obama’s feckless foreign policy (and I believe he was) he will not allow the threat of terrorism by the Palestinian Authority to dictate his foreign policy decisions.

Whether or not their incitement leads to violence, the Palestinians should be very careful because more than just trying to bully a U.S. president who can’t be bullied, they may be pushing the Congress and the President to re-think all that foreign aid the P.A. leadership is using to line their own pockets.