HEY DEMS: China Murders Prisoners For Organ Harvesting… Where Are Your ‘Sanctions’ Pronouncements? 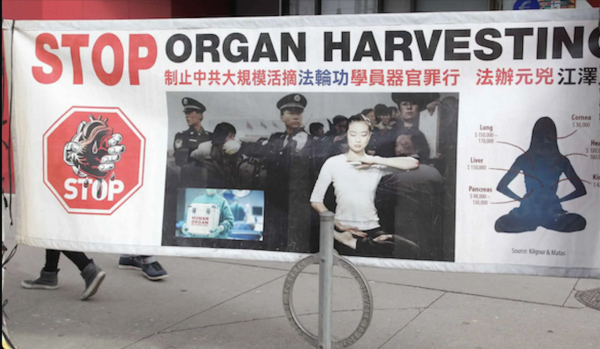 When Trump came into town, bringing a message of ‘America First, the chorus of rage that inspired on the left would make you think he had murdered each of their firstborn kids. Maybe, in a way, he did.

If Trump made good on his plan, their globalist gravy train would grind to a halt, and the big-money influence-peddling game China’s CCP has been engaged in for years — not just with politicians like Swalwell and Feinstein, but through Universities, Corporations, Media conglomerates, strongarming Hollywood and the NBA … on and on it goes. And that’s not even addressing the industrial espionage itself, where China has secreted itself into the most powerful corporations.

But don’t take our word for it. Here’s a Chinese Professor bragging about the degree of influence that China has at the top tiers of political power:

It’s time we shine a light on just who it is these ‘elites’ are climbing into bed with.

These supposedly ‘woke’ politicians will go to war with ordinary Americans standing up for the ideas and traditions our country was founded on while taking literal blood money from a regime that murders political prisoners to use them for spare parts.

It doesn’t take a Ph.D. in ethics to understand that killing humans and using them as a source of spare parts is a Josef Mengele tier atrocity, does it?

If we’re having such a visceral reaction against Putin in light of the war crimes in Ukraine, surely we can expect a proportional response from our ‘woke’ leaders in light of what we’re hearing here, right?

Many know that China has long used organs from prisoners. The model here is: execution ground -> firing squad -> organ procurement.

But in China, the security apparatus & medical system faced a challenge: How to reliably inflict brain death on prisoners in a controlled manner? Shooting them in the head might accidentally lead to circulatory death, wasting the heart.

Remember that brain death can only be determined if the patient is already on a ventilator. But in our review of Chinese clinical reports, we found that surgeons are declaring the donor brain dead, *but only then putting them on a ventilator.*

Our methods. First we scraped over 120,000 Chinese language medical publications. Then we filtered them for heart and lung transplants. Then we wrote a 'fuzzy string matching' algorithm that searched through these reports for sentences and phrases indicating unethical conduct.

This is what the raw data looked like: pic.twitter.com/xcPMwpQSEy

Our discovery surprised us. This is the only instance we are aware of where the medical profession in a country has collaborated closely, for decades, with the security apparatus to source and medically execute prisoners in order to traffic their organs.

We write that we cannot conclude one way or the other. If use of prisoners stopped, then naturally the abuse would stop. But if prisoners *are* still being used, the abuse would likely continue. We think there's good evidence that prisoners continue to be used as an organ source.

So this is/was probably taking place at a much larger scale. We suspect that execution by procurement became the default method for solving the clinical and logistical challenges in heart transplants from prisoners – otherwise quite tricky to solve for optimal transplant outcomes

If we’re boycotting Russian vodka over their invasion of Ukraine, maybe we should start decoupling our economy from a country that steals our tech, uses that money to undercut our jobs, corrupt our politics, massacres the Uyghurs, and exploits people for spare parts.