Oregon Passes The Most Extremist, Barbaric Abortion Bill In The Country 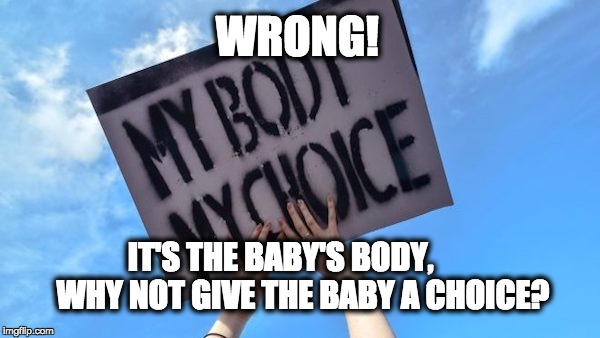 If Oregon’s newly passed abortion bill merely forced all state resident to fund abortions no matter what the individual taxpayer’s moral standing on life issues, it would be awful. But this new law not only breaches that redline and goes way past it without blinking.

The new Oregon law forces taxpayers to fund for all kinds of abortion including late-term and even gender selection. Mull over that one, a pregnant woman who is eight months pregnant can decide she doesn’t like the wallpaper choices for a girl’s room and abort her daughter so she can go for a boy. Yes that is an extreme example…but under the new law it would be totally legal.

The Oregon legislature passed a bill, without the support of a single Republican legislator, that will FORCE every citizen of their state to play a role in the murder of thousands of children. To make matters worse, the state’s Democrats are cheering their embrace of infanticide.

The Democrat bill will now require that every single health insurance plan sold in their state fully cover abortion on demand. Abortion on demand means at any point in the pregnancy, for any reason the parent chooses including sex-selective abortion, or abortion at 39 weeks. It’s a truly horrifying and barbaric bill.

To help cover the costs the state will set aside $10 Million in taxpayer dollars to fund the abortions, and this includes a large pool of cash from which illegal immigrants can fund their abortions as well. That pool will fulfill the original intend of Planned Parenthood, Margaret Sanger didn’t want too many minority babies running around the country.

If Oregon has $10 Million to set aside for abortions, wouldn’t that money be better spent paying for medical care for the poor? This statute is truly insane and it unmasks the hypocrisy and evil that is at the core of the Leftist eugenics fantasies. Each year, leftists waste MILLIONS (perhaps Billions) in their efforts to murder as many unplanned babies as they can, when if they would just use that money to fund low-income healthcare… we wouldn’t need socialized medicine! But who cares about logic, leftists just want the right to murder babies.

In some states such as New York, abortions are cost-free if they’re deemed medically necessary. The Oregon bill is unique, however, in that patients would have access to the procedure for virtually any reason, at any time, including sex-selective and late-term abortions.

Heck, as long as the baby hasn’t been born yet the patient can have an abortion because she had a dream that labor was going to make her miss the “Friends” reunion

The bill would also allocate almost $500,000 over the next two years to expand cost-free reproductive health coverage, including abortions, to immigrants who are otherwise ineligible under the Oregon Health Plan — the state’s Medicaid program that currently spends nearly $2 million a year to pay for roughly 3,500 abortions statewide.

State Rep. Bill Post (R) argues that the law is unnecessary and burdensome because Oregon already pays for most abortions performed in the state.

Post has been an outspoken opponent of the bill and he had hoped they would triumph, but they failed. Earlier this week he gave a tearful speech apologizing for the GOP’s failure, and begging the state’s conservatives to become more active.

Oregon Right to Life Director Gayle Atteberry was heartbroken at the legislatures decision,

This bill is wrong on so many levels. Fundamentally, HB 3391 is morally reprehensible because it will take the lives of even more innocent Oregonians.  Sadly, even the barbaric practice of late-term abortion will increase as abortion is legal in Oregon through all 9 months.  This is not to mention that many Oregonians are opposed to the use of their tax dollars to fund abortion.”

All that is left is for the state’s liberal Governor, Kate Brown (D-OR), to sign the bill into law and every Oregonian will be paying for infanticide whether they like it or not. But if you’re hoping that Brown will vote against the bill, don’t hold your breath because she’s already been seen cheering it on.

Lila Rose, the President and Founder of Live Action Network, found the bill and Brown’s display of glee disgusting.

Guy Benson of Townhall.com ripped the bill, and the abortion supporters who defend, it to shreds. Benson also points out that the media has been silent as this radical bill has been pushed through the Oregon legislature, which is odd, considering how vocal the media gets when conservative bills move through their state Houses.

It’s difficult to imagine anything more extreme, aside from compulsory abortions.  It’s horrifying.  Every single Oregon Senate Democrat voted in favor of this monstrosity, with every Republican opposed.  The House vote was also almost exclusively along party lines.  Governor Brown giddily vowed to sign the legislation, calling opposition to tax-funded late-term abortion “an attack on all Oregonians.”  Orwellian.

Oregon has passed a truly radical new abortion law. It’s a monstrosity and an affront to human rights.https://t.co/MEZ2lUuBbT

We live in troubled times, and while so much good is happening around us, Oregon exists to remind us that there is real evil in this world. Real evil that is not just “out there” with groups like ISIS, and Al Qaeda, but it’s here at home too with agencies like Planned Parenthood and the Democrat Party of Oregon.

Ponder this, what do you think this law teaches Oregonian children, life is cheap? It’s okay to kill because you feel like it? Parents are concerned about violence in cartoons. Some have even complained about the ones that show a cartoon coyote injuring himself every time he tries to kill a cartoon road runner.  Well this ain’t no cartoon. What do you think young kids will pick up from the life is cheap attitude, where mommy and daddy decide to kill little sister? Or aunts, friend’s parents, etc. I submit to you that one of the reasons our society seems more violent than the past generation is that Roe v. Wade has taught them that life is a commodity.

And the really sick part is if Oregon passed a bill allowing dog or cat owners to force their pregnant pets to have abortions whenever they felt like it, there would be millions of people marching at the state capital. But these aren’t puppies or kittens, nor are they clumps of cells, these are unborn humans and what the new Oregon law proves that at least among the Democrats in the Oregon legislature, and their Democratic Party Governor, no one gives a damn about human babies.