Will Trump’s Operation Warp Speed Finally Be Recognized As A Great Success? 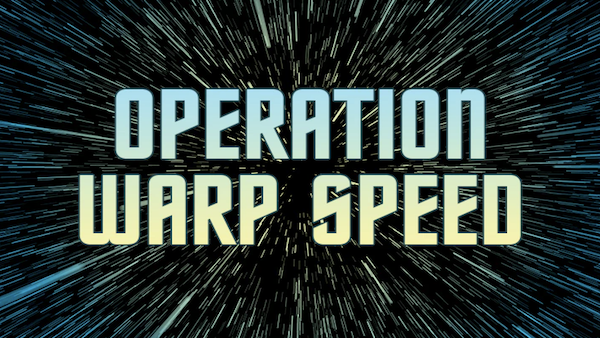 Remember when the media and liberals said it would be impossible for a vaccine to be developed and begin distribution before the end of 2020? As usual, they were wrong. President Trump announced on Thursday evening that COVID-19 vaccine deliveries would begin early next week, “The whole world is suffering, and we are rounding the curve,” the president said. “And the vaccines are being delivered next week or the week after.”  Operation Warp Speed

The announcement came during a special Thanksgiving holiday message to U.S. troops overseas via teleconference. Trump noted that front-line workers, medical personnel and senior citizens would be the vaccine’s first recipients.

He also argued that his opponent, President-elect Joe Biden, should not be given credit for the vaccines, which he referred to as a “medical miracle” before repeating claims of voting irregularities in the 2020 election.

The comments made by the president come days ahead of a meeting due to take place on December 10, where regulators with the Food and Drug Administration will take a look at Pfizer’s request for an emergency use authorization for the coronavirus vaccine that it has developed along with BioNTech.

The latest data to come out of test trials for this particular vaccine, which was revealed earlier in the month, is at least 90 percent effective.

Moderna is also working on a vaccine, and the company stated that its product is 94.5 percent effective in preventing coronavirus infection. They will soon ask for emergency use authorization for their vaccine.

Folks, whether you plan on taking the vaccine or not, the good news is that President Trump promised he would have one by the end of the year, and he has delivered. His Operation Warp Speed is a great success.

Operation Warp Speed doesn’t cut efficacy or safety corners as some liberals, and the MSM contend.  The program speeds the development of vaccines via federal funding for R&D and federal pre-purchasing of millions of doses before the vaccine is fully tested.  These funds allow vaccine developers to conduct all the normal steps of traditional drug development. Still, instead of doing step one, then step two, etc. Under Operation Warp Speed, all steps proceed simultaneously, such as starting manufacturing the vaccine at industrial scale well before demonstrating vaccine efficacy and safety.  Thus, the government takes a big part of the financial risk that the investment may not lead to a successful vaccine. BUT the product is still deemed safe and efficacious before it is distributed to the public.

Unfortunately, there’s no doubt leftist media will ignore the incredible success of Operation Warp Speed and give Joe Biden all of the credit if he is truly declared president.  They hate President Trump so much that the mere thought of him having any sort of positive accomplishment is unacceptable.