Afghans Who Helped US Will Not Be Left Behind 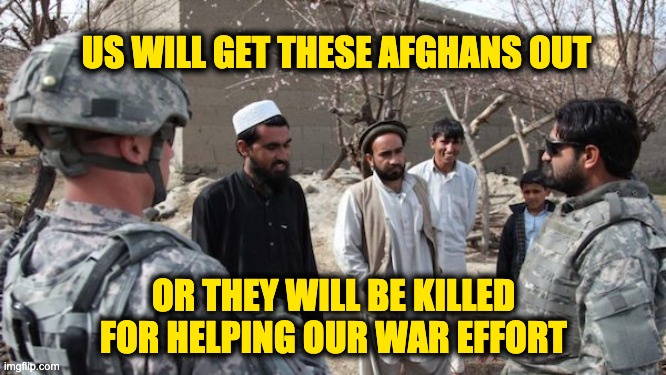 Just over a month ago, I bemoaned what could happen to some of our most important allies in the past two decades if we didn’t act fast. So I was pleased to hear this week of progress in assisting those who risked their lives to help the United States during the Global War on Terror.


Realizing Afghans who served as translators alongside Americans in theater now face threats from the Taliban as U.S troops leave, the House voted this week to expand the Special Immigrant Visa program (SIV) to allow quicker emigration for the Afghans who supported the U.S. War effort.

The bill would nearly double the number of available SIVs for Afghans — to 20,000 from 11,000 — and broaden those who are eligible for them. In the House, the legislation passed 407-16 and was spearheaded by  Rep.Jason Crow (D-CO), a former Army Ranger.

“They will be killed if we don’t get them out of there,” Texas Rep. Michael McCaul said. “Please, Mr. President, get them out before they are killed.”

Afghan nationals who aided the war effort will be temporarily housed at an Army base in Virginia while their visas await final approval. Fort Lee will briefly host up to 2,500 interpreters and their families who’ve completed the security vetting process. The Military hopes the effort to start relocating those individuals and their families out of Afghanistan before the end of July.

Unfortunately, “Operation Allies Refuge” faces an uncertain future in the Senate, where there is bipartisan support for the visa program. Still, funding for its expansion has been embroiled in the broader fight about spending.

The Biden administration has also been considering housing the applicants outside of Afghanistan — either in central Asia, the Arabian Peninsula, or Guam — before they come here.

Since Joe Biden announced the American military was leaving Afghanistan 100 days ago, the Taliban has seized half of Afghanistan’s 421 districts and took any momentum over Afghan military forces.

“There’s a possibility of a complete Taliban takeover, or the possibility of any number of other scenarios,” the Joint Chiefs of Staff chairman said, emphasizing how perilous the situation will be once the Taliban conquers more territory.

Even mainstream media reports concerns about the country becoming a safe haven for the terrorists who attacked us on 9/11.

Sadly, this tragedy was all too predictable.

Counter to isolationists’ and anti-war radicals’ claims, our combat role in Afghanistan ended back in 2014. Thankfully, no U.S. combat deaths have occurred in 18 months. By comparison, there have been more than 1,100 homicides in Chicago since February 2020.

The highly skilled troops were supporting the Afghans fighting our enemies; we are not “nation-building.” The goal is to make certain Afghanistan doesn’t have a government that plots attacks on America and the West.