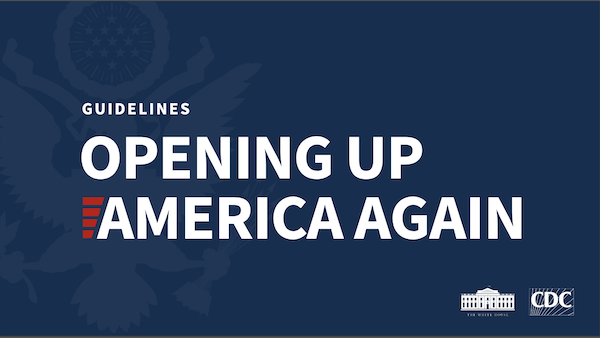 Its called Opening Up America Again. There is nothing here for the governors to object to.  The plan is very gradual and the timing is up to the states. The plan has three phases and won’t start until the state passes certain “gating” criteria for two weeks. The phases leave room to slow down if there is CoronaVirus outbreak. The plan has been approved by the doctors on the task force.

We will add analysis after going through the plan a few times and I understand it better. Below is the White House overview of the plan and below that, the full 18-page document.

CONTINUING TO PROTECT AMERICANS: These new guidelines represent the next phase in President Trump’s data-based approach to protect the health and wellbeing of Americans.

LEADING A HISTORIC MOBILIZATION: President Trump has led a historic mobilization to rapidly ramp up testing and the distribution of medical supplies.

White House Guidelines for… by Jeffrey Dunetz on Scribd