OMG! They Want To Ban All The Muslims (No Not Trump) 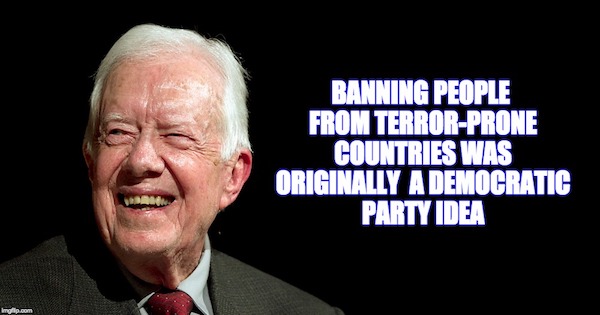 Well not so much! Yes, the President did launch against Muslims… in 1980. That was President Jimmy Carter. Carter’s Attorney General at the time ordered all Iranian students holding a Visa to report to immigration officials or face immediate deportation. A federal judge ruled it unconstitutional (sound familiar?) BUT, it was then reversed by a higher court in September of 1980. There were over 60,000 students registered. Of that, 430 were deported because of visa issues and concerns. Another 5000 left voluntarily.

Carter also ordered the invalidation of visas issued to Iranian citizens for future entry into the U.S. He stated that we would not reissue visas nor would we issue new visas except for compelling and proven humanitarian aid reasons or where our national interest is at hand and the directive is to be strictly interpreted! (Can someone show me the links to the Democrat Liberal outcry?)

So, let’s just say that Carter’s was OK because it was temporary. So is Trump’s. It’s also been said that Carter’s was different because it didn’t call out a single religion and was dealing with a current crisis. Ah, really? Trump’s is also dealing with a current crisis and the “news” media is lying to us when they say it’s against a religion. It’s not! It’s against nations who harbor terrorism and have ties to ISIS who happen to have a heavy Muslim population.

Another lie… Trump is banning all Muslims from entering the U.S. YUP, another “fake news” story. Trump’s temporary ban doesn’t include the 7 countries that “fake news” is reporting. It includes one country, Syria, and Trump has agreed to create safe spaces for them. (If it’s good enough for our college kids, it should be good enough for refugees!)

If you actually read the document it says:

The order seeks “to protect the American people from terrorist attacks by foreign nationals admitted to the United States.” It says that it seeks “Suspension of Issuance of Visas and Other Immigration Benefits to Nationals of Countries of Particular Concern.” It also says “I hereby proclaim that the immigrant and nonimmigrant entry into the United States of aliens from countries referred to in section 217(a)(12) of the INA, 8 U.S.C. 1187(a)(12), would be detrimental to the interests of the United States, and I hereby suspend entry into the United States, as immigrants and nonimmigrants, of such persons for 90 days from the date of this order.”  And it targets Syrians specifically. “I hereby proclaim that the entry of nationals of Syria as refugees is detrimental to the interests of the United States and thus suspend any such entry until such time as I have determined that sufficient changes have been made to the USRAP to ensure that admission of Syrian refugees is consistent with the national interest.”

The news is reporting that the order bars all people hailing from Iraq, Syria, Iran, Libya, Somalia, Sudan and Yemen. Not true! And the news continues to attack Trump for selecting these seven countries and not selecting other states, saying he is protecting “his sprawling business empire in these other countries.” Large publications bought into it without any fact checking, AGAIN!

Before I forget the 7 nations falsely mentioned as Trump’s choices for harboring terrorists actually came from the Obama Administration. YUP! You see, Mr. Obama, at the request of then-Secretary Hillary Clinton (see a pattern here?) paused the Iraq refugee program for over 6 months in 2011. Selective recall by the Democrats.

I might add that the “Terrorist Travel Prevention Act of 2015” not only included those 7 terrorist nations but prohibited entry into the United States even if you had simply travelled to one of those countries. What? No outcry?

Who was Secretary of State in 2011? Mrs. Clinton. In 2011, the FBI found (quite by accident) that Al Qaeda operatives were allowed in with a batch of Iraqi refugees due to poor background checks. All the things we are told we don’t have to worry about. And who reported on this? It’s ABC News, not that so-called nutjob place FoxNews. Did I say batch? That’s a dozen, I mean several dozen, who were let in. The FBI concluded many were bomb makers targeting American troops on military bases.

The FBI were tipped off after they found 2 Al Qaeda operatives with Iraqi refugees in Bowling Green, Kentucky. They were brought to court and admitted to attacking American soldiers in Iraq. The FBI was so concerned that they dispatched 100’s of agents to try to track down where they were sending the IED’s in America.

There was so much information gathered that the Obama Administration paused Iraqi visas for 6 months and allowed fewer than 10,000 visas to be processed for the rest of the year. That was less than ½ compared to the year before.

The ABC News team concluded that the vetting process was flawed and dangerous. Not Breitbart. Not Fox News. But mainstream media… ABC.

In checking out the process, it seems the basic verification process is to check names, variation of names, and fingerprints against a “known terrorist affiliate” list. The word that should slap you in the head is “KNOWN.” Hello! How do we know someone we don’t know? How does someone who hasn’t been caught making bombs in Iran, Iraq, or elsewhere get on the “KNOWN” list if he hasn’t ever been caught or suspected? They DON’T! Therefore, they will always come up clean, just like the above bomber did!

Sounds like the Obama vetting system worked well. Obama “paused” immigration 6 different times. Not a word from the Left!

I also believe that Bill Clinton signed a travel ban from countries that had HIV outbreaks. Again, no outrage from the Left!

Didn’t FDR sign a proclamation / executive order limiting the right of German, Japanese, and Italians in this country, whether they were born here or not? I don’t believe he sent them back to their countries. I believe he locked them up in internment camps. Yet FDR is held in the highest esteem by Democrats all over the country.

SO… back to my usual statement… if you’re a Democrat, everything your team does is righteous and everything the Republicans do is devilish, though that may not make sense to some of you because you don’t believe in Heaven or Hell!

It’s not equality the Dems want, it’s total control and there is no fair playing field with their bat and their ball. The rules change as they need to in order to give them the upper hand.

You were found out in this election. Major wins over the last 8 years in all areas of Government for Republicans and Conservatives.

Dems, please keep using your same message and same mantra. It will ensure a long, victorious run for Republicans and Conservatives. And long live Nancy Pelosi!