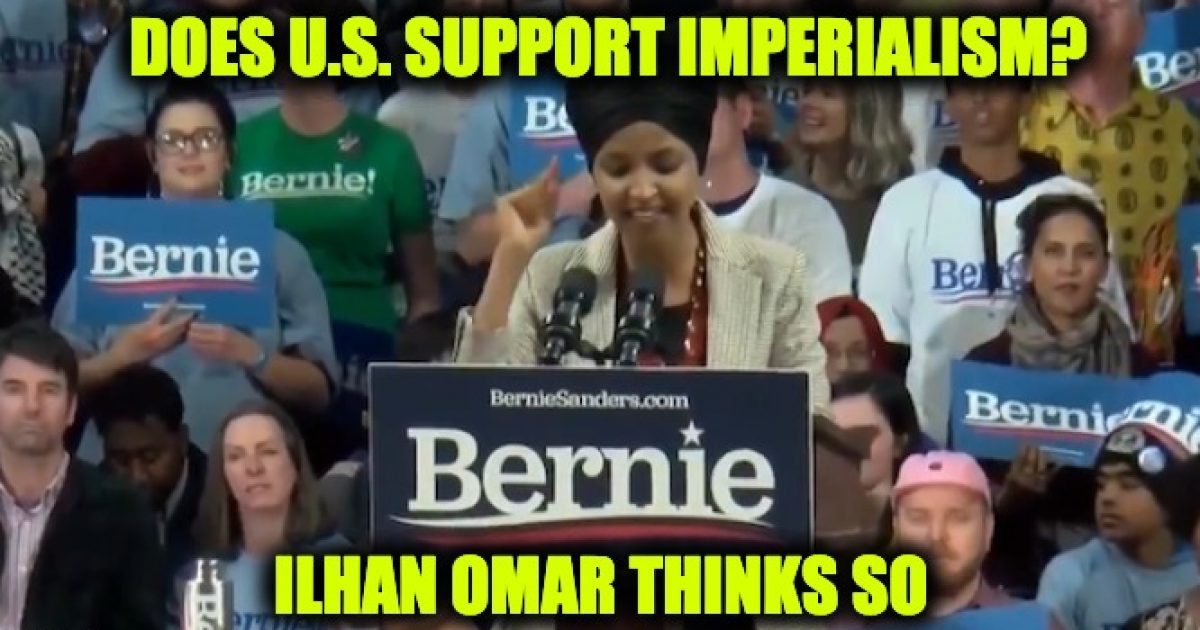 Ilhan Omar says the most unpatriotic things. While campaigning for socialist Sen. Bernie Sanders in Minneapolis on Sunday night, Ilhan Omar, the anti-Semitic, America-hating, terrorist-loving, socialist Democrat from Minnesota, told the crowd that she’s really excited to support Sanders. “I am beyond honored and excited for a president who will fight against Western imperialism and fight for a just world,”

Ilhan Omar says the most unpatriotic things. While campaigning for socialist Sen. Bernie Sanders in Minneapolis on Sunday night, Ilhan Omar, the anti-Semitic, America-hating, terrorist-loving, socialist Democrat from Minnesota, told the crowd that she’s really excited to support Sanders. “I am beyond honored and excited for a president who will fight against Western imperialism and fight for a just world,”

What western imperialism? America fights imperialism. We send our military across the world, not to take over other countries, but to help them fight from being taken over. And President Trump is trying to get us out of foreign wars that aren’t necessary to protect our own homeland.  But Omar isn’t a big fan of the country that took her and her family in when they were refugees.

Rep. Ilhan Omar (D-MN) says at Bernie Sanders' campaign rally that she wants a president that fights against "western imperialism"

In other words, she wants nations like China to go unchecked in their growing aggression and expansion which is a massive threat to the U.S. pic.twitter.com/IPuSt9WASA

"I am beyond honored and excited for a President who will fight against western imperialism and fight for a just world. I am excited for President @BernieSanders" @IlhanMN as she welcomes @BernieSanders to the stage #BerniesBackInMN pic.twitter.com/Rg9EPCnNL8

“Here’s the cold truth: We can’t achieve any of these goals if we don’t build a movement that is representative of all of our aspirations, all of our pain, and all of our shared trauma,” Omar told the crowd. “That is why we must build a mass movement of the working class that transcends faith, age, gender, and background.”

“That’s what we fight for here in Minnesota every single day, and that’s the movement that Senator Bernie Sanders is building,” she added. “Bernie knows that systematic change in this country has never taken place without millions of people organizing to demand that change.”

Translation: She’s really super-duper excited to support someone who hates America as much as she does.

In seems in this context this is best understood as, “Bernie will fight to defeat America.”

Many of us have been saying that for a while.

Exactly what does Ilhan mean by western imperialism? Anybody?

Trump wants to end forever wars too. But that's different, because it's Trump, right? #InsaneLiberals.

Here s what’s confusing is Omar has made many anti sematic remarks, demonizes the US at every turn and defends terrorist. Plus she cheated on her husband so doesn’t seem to be a good person. This is just my perspective what are your thoughts of those that support her?

Bernie is going to lose if he keeps hanging out with idiots like her.

At least he didn't say you married your brother and was banging and paying off a married campaign contractor while you were married, so he showed restraint. https://t.co/p2ohzpLjKl

Treasonous traitors and they don’t even hide it, disgusting.

It is scary watching people cheer for the dismantling of the USA with a congresswoman leading the charge. How can she uphold her oath to the USA with her statements? Should be removed !

Yeah but Rep. Omar doesn’t think so, Neither does Bernie (or the Democrats)

Ain’t that the Truth

Ilhan Omar believes that America takes over countries just to bleed away their resources.  I wonder if she could name one, I can’t because it’s not true.