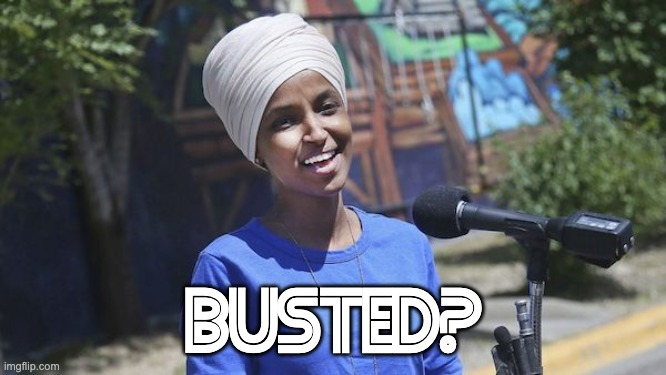 “Allegations of voter fraud being evaluated,” the department tweeted Monday evening in all capital letters.

“The MPD is aware of the allegations of vote harvesting,” they continued. “We are in the process of looking into the validity of those statements.”

ALLEGATIONS OF VOTER FRAUD BEING EVALUATED. ✅ The MPD is aware of the allegations of vote harvesting. We are in the process of looking into the validity of those statements. No further information is available at this time on this.

Another good reason not to de-fund the (MPD) Minneapolis Police!

Project Veritas claims to have uncovered a scheme in which hundreds of ballots are illegally harvested in Omar’s Minneapolis district. Ironically they released the first of two videos of the anti-Semitic Omar ballot harvesting scheme on Yom Kippur, the Jewish Day of Atonement. Hopefully, the MPD will find out enough information for Omar to be “sealed in the book” of jail.

Liban Mohamed, brother of Minneapolis City Council member Jamal Osman, demonstrates in a Snapchat video how his “car is full” of ballots. That’s reminiscent of Al Franken stealing the senate from Norm Coleman,

Minnesota law states that no individual can be the “designated agent” for greater than three absentee voters.

Also, in the Project Veritas videos, whistleblower Omar Jamal states that “[Omar] will do anything that she can do to get elected and she has hundreds of people on the streets doing that.”

Another person identified only as a ‘former political worker’ accuses Omar’s campaign deputy district director, Ali (Isse) Gainey, of having “perfected this system” of harvesting ballots. At least he has a skill—his mother must be proud.

The Project Veritas report has not been verified by the MPD, who stated, “no further information is available at this time.”

Say what you want about Project Veritas, but the video evidence is pretty stunning. Congress should investigate this matter. https://t.co/cEcG5xLMsJ

“This is totally illegal,” Trump tweeted. “Hope that the U.S. Attorney in Minnesota has this, and other of her many misdeeds, under serious review.”

Tulsi Gabbard Explains Why Ballot Harvesting Needs to Be Banned

Rep. Tulsi Gabbard (D-HI), citing the Minneapolis investigation, re-upped her call for a ban on the practice of ballot harvesting.

“Banning ballot harvesting is not a partisan issue. It’s been used and abused in states like North Carolina and California and is ripe for fraud,” she wrote on Twitter earlier this month.

Gabbard references H.R. 8285, a bill to “amend the Help America Vote Act of 2002 to prohibit payments under such Act to States which permit ballot harvesting.”

The legislation is a bipartisan effort, sponsored by Gabbard and co-sponsored by Rep. Rodney Davis (R-IL).

Congress needs to pass our bipartisan bill to ban ballot harvesting so no one can exploit our sacred right to vote. https://t.co/5Vh7rLsQDa

The undercover video group has come under fire in the past over inaccurate reporting. However, making an investigation by the MPD all the more critical.

Ilhan Omar has called to “completely dismantle the Minneapolis Police Department” previously, comparing them to a “cancer” that needed to be cut out. Now we know why. They like to investigate possible crimes.