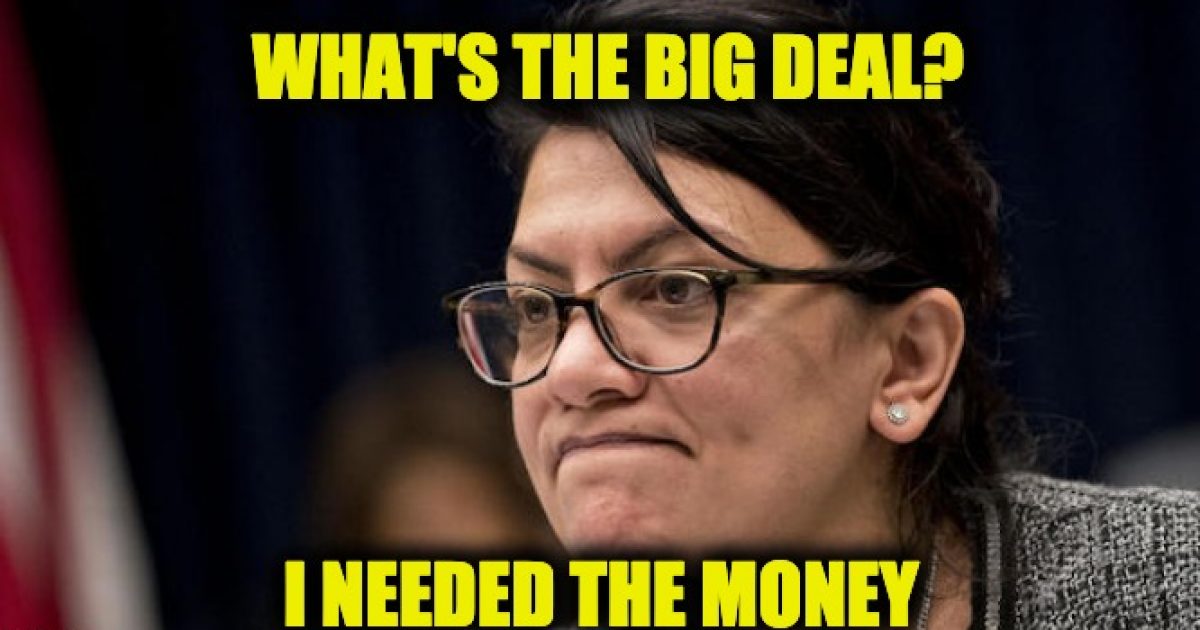 The House Ethics Committee released a report from OCE (Office of Congressional Ethics) saying there’s a “substantial reason to believe” Rep. Rashida Tlaib (D-MI) misused campaign funds. The report (embedded below) focuses on payments Tlaib’s campaign made to the Michigan Democrat after the Nov. 6, 2018 election but before she took office, and that is illegal based on campaign finance rules. Based on that report, the ethics committee announced they would be expanding the investigation. OCE Rashida Tlaib

WOW! There really is an Office of Congressional Ethics? Who’d have thought it? They must be extremely busy.

Included in the report were Tlaib emails to her campaign committee begging to use the campaign money.

In one April 2018 email offered as an exhibit by OCE, Tlaib wrote that she was “struggling financially right now” and was “sinking.” She continued: “So I was thinking the campaign could loan me money, but Ryan said that the committee could actually pay me. I was thinking a one time payment of $5k.”

In another email, on April 4, 2018, Tlaib wrote: “I am just not going to make it through the campaign without a stipend.”

“With the loss of a second income to lean back on,” she wrote. “I am requesting $2,000 per two weeks but not exceeding $12,000. The cost of living stipend is going towards much needed expenses due to campaigning that includes car maintenance, child care and other necessities. Please let me know if I can proceed.”

Gee crapping all over Jews and Israel must be an expensive proposition.

In August of that year, Tlaib texted her future chief of staff Ryan Anderson at 6:38 a.m.: “Sorry for the early text but do you think the campaign can still pay me a stipend until the general. Trying to get out of debt.”

“I think we definitely afford to do so. But we need to really clearly define your time and space,” Anderson responded, noting that the arrangement could arouse “concern” among the media.

The money paid out before the election may be legal, but campaign finance guidelines, allow candidates to receive payments from their campaign for work performed prior to the election as a salary, not after. and according to OCE, she received $21.5K of salary after the 2018 election (see page 10 of the document below)

Based on the foregoing information, the Board finds that there is substantial reason to believe that Rep. Tlaib converted campaign funds from Rashida Tlaib for Congress to personal use or Rep. Tlaib’s campaign committee expended funds that were not attributable to bona fide campaign or political purposes.

Accordingly, the Board recommends that the Committee further review the above allegation that Rep. Tlaib converted campaign funds from Rashida Tlaib for Congress to personal use or Rep. Tlaib’s campaign committee expended funds that were not attributable to bona fide campaign or political purposes.

Tlaib has denied wrongdoing and released a statement that was carried by the Detriot News:

In a statement, Tlaib said she had to leave her job as a civil rights attorney to campaign for the U.S. House in 2018 while raising two sons as a single mother. Federal regulations allowed her to receive a salary, and she “received the minimum salary payments necessary for me to meet my personal financial obligations, while ensuring that the campaign reserved the resources needed to reach voters,” the freshman lawmaker said.

Tlaib’s statement added, “I look forward to the Ethics Committee’s prompt resolution of this matter in my favor, and I hope my experience will clear more room for people like me to run for office by availing themselves of FEC innovations that level the playing field, like paying a non-incumbent candidate salary or covering childcare expenses with campaign funds, so that financial privilege is not a prerequisite to participate in our democracy.”

By “people like me, does she mean socialists, America-haters, or anti-Semites? The full OCE document is below: