Report: Ocasio-Cortez Might Be Looking To Take Out Chuck Schumer 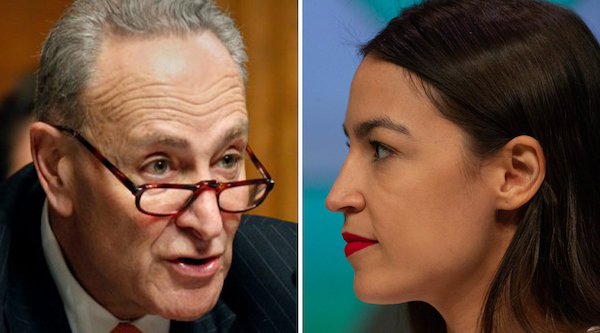 A profile by New York magazine indicates Alexandria Ocasio-Cortez is being urged by those within her camp to challenge either Chuck Schumer or Kirsten Gillibrand for a Senate seat.

The report also reveals that some of her aides encouraged the New York socialist to run for mayor of New York City, a city already being decimated by another perpetually befuddled socialist.

She apparently nixed that idea.

“People close to her discussed a possible run for mayor of New York in 2021 but decided against it,” columnist David Freedlander writes. “A statewide run, probably for the Senate, is likelier.”

He adds, “That would mean challenging Chuck Schumer in 2022 or Kirsten Gillibrand in 2024.”

Alexandria Ocasio-Cortez: “Three chambers of government — the presidency, the Senate, and the House” ??‍♀️#LordJesusTakeTheWheel pic.twitter.com/CMpzxXQJMw

Holy Cow, AOC, or Chuck Schumer, that’s a choice like being hit by a freight train or a commuter train.  They both suck.

According to the Atlantic, the reason Schumer voted no on the USMCA is to build a leftist record to ward off an AOC challenge.

Does It Make Sense?

A follow-up report in New York’s City & State concludes that her popularity and cash on hand by the end of 2020 would give her a fighting chance against Schumer. At least AOC knows how to wear her glasses.

The Senate Minority Leader would be the more likely target due to Gillibrand’s sharp lurch to the left during her failed presidential campaign.

Another factor that could lead to her run involves hostility from within her own party. Recent news indicates that Democrats in New York are attempting to redraw and eliminate her district in 2020.

On the contrary, City & State indicates polling is on AOC’s side. However, they cite a survey from April while another in June “found that she has a low 21% favorability rating, that just 11% believe she has their best interests in mind, and that only 13% would vote to reelect her.”

Additionally, Schumer is just as much a fundraising powerhouse as AOC, and it’s tough to convince New York voters to discard entrenched Democrats. Chuck has been in the Senate for over 21 years and served 18 in the House before that. Perhaps though he may become vulnerable if it becomes apparent to voters that he doesn’t give a rat’s arse about New York or the United States, just his party.

Alexandria Ocasio-Cortez’s work as a surrogate for Bernie Sanders has triggered speculation about a potential bid of her own for the White House https://t.co/k04hVkHbu6

Having overlooked the mayoral race in New York City, why settle for the Senate?

A Politico report mere weeks ago indicated that Ocasio-Cortez’s work as a surrogate for Bernie Sanders is prompting an overwhelming groundswell of support for a future presidential run of her own.

That would be like being hit by the freight train and the passenger train.

Ocasio-Cortez has indicated she’s reached an incredible level of fame in a short period of time. “I can’t go outside anymore. I miss being able to go out to dinner. I miss anonymity,” she whined in the same New York magazine interview.

Despite that popularity, Lupe Todd-Medina, founder of a political public relations firm, tells City & State that taking on Schumer would be a “kamikaze mission.” “She is too politically smart to take on an incumbent challenge where the downsides are so high,” Todd-Medina continued.

Is she really? Has Todd-Medina ever seen AOC try to use a trash compactor?