Report: Obama Is Worried That Biden Will ‘F— Things Up.’ 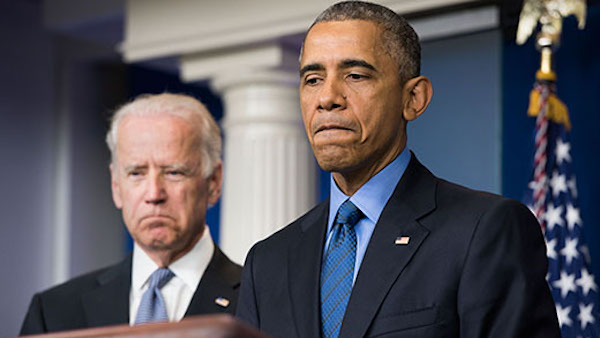 Apparently, Barack Obama is worried that Biden will screw up the election. And when he loses, they will claim that’s what happened. Obama’s team isn’t pleased with candidate Biden either. They will still support him but perhaps not as enthusiastically as expected.

Team Obama 2008 selected Joe Biden as his vice presidential running mate because the Senator had decades of foreign policy experience in Washington. Of course, most of it was wrong according to former defense secretary Robert Gates.

Many top Obama administration and campaign officials sat on the sidelines or worked for candidates other than Biden. Top former aides including strategist David Axelrod and the young hosts of Pod Save America—Jon Favreau, Tommy Vietor, Jon Lovett, and Dan Pfeiffer—at times ridiculed the former vice president’s campaign. Biden is one of the few candidates to have not gone on either of their popular podcasts during the campaign, despite having been invited: “I can’t speak for his campaign’s scheduling decisions,” said Vietor, “but the Zoom is always open.”

Obama isn’t confident that Joe can take things across the finish line:

Yet searing, anonymously sourced quotes from Obama kept appearing through the race. One Democrat who spoke to Obama recalled the former president warning, “Don’t underestimate Joe’s ability to fuck things up.” Speaking of his own waning understanding of today’s Democratic electorate, especially in Iowa, Obama told one 2020 candidate: “And you know who really doesn’t have it? Joe Biden.”

Yikes, that doesn’t sound like a ringing endorsement. Politico recounts that some in the Obama administration were frustrated by Biden’s inability to stay focused on the point of a meeting. Ben Rhodes wrote in his book, “in the Situation Room, Biden could be something of an unguided missile.”

Some Biden allies noted that Obama’s endorsement of Biden, when it finally arrived, lacked the effusiveness of his endorsement of Clinton. “I don’t think there’s ever been someone so qualified to hold this office,” he said of Clinton in his video message in 2016. Four years later, in his endorsement video for Biden, he said: “I believe Joe has all of the qualities we need in a president right now … and I know he will surround himself with good people.”

Biden aides also fumed at Axelrod and Plouffe penning a New York Times op-ed that instructed them on “What Joe Biden Needs to Do to Beat Trump,” according to Democrats who talked with them.

Next week at the Democratic Party convention, Barack and Michelle Obama will each speak in support of Joe Biden. But with the Obamas, what they say isn’t necessarily what they are really thinking.