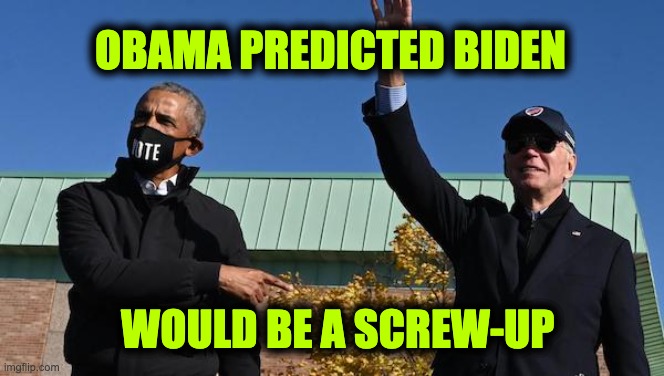 Joe Biden has proven not to be a leader, which is something that was predicted by another non-leader…it was just one year ago, on August 14, 2020, Politico reported a dire warning from former President Barack Obama: Obama warned America

“I think the turnout tonight demonstrates the high regard in which the vice president is held in the extended Obama family,” Rouse told the crowd of about 50 people. “And I think that that message is not out as far as it should be.”

Yet searing, anonymously sourced quotes from Obama kept appearing through the race. One Democrat who spoke to Obama recalled the former president warned, “Don’t underestimate Joe’s ability to f**k things up.” Speaking of his own waning understanding of today’s Democratic electorate, especially in Iowa, Obama told one 2020 candidate: “And you know who really doesn’t have it? Joe Biden.”

Obama is rarely correct, but that statement was a true prediction of Joe Biden’s first seven months in the Oval Office. Since inauguration Day on January 20, everything Joe Biden has touched has turned to manure.

On his first day in office, Biden began to open the southern border to illegal immigration. The months since have seen the people sneaking over our southern border in record numbers. Taking advantage of the open border is a major jump in deadly Fentanyl coming into the U.S. through our southern border. And it has been estimated that 20% of the people crossing the border are infected with COVID 19.

The messages about COVID given to the American people by the government have been all over the place and seem to change daily. Masks,,, no masks, Who can take the vaccine…there will be no mandates,,, there will be a mandate. Masks work…masks don’t work, and on and on.  Whether right or wrong, the only things that have come through is confusion and what seems to be a loss of personal freedom.

Biden’s withdrawal from Afghanistan has been a disaster. On July 8th Biden said, “the likelihood there’s going to be the Taliban overrunning everything and owning the whole country is highly unlikely.” Biden set the withdrawal date for August 30th, But it seems Afghanistan won’t even last that long. On August 15 the Taliban has entered Afganistan’s capital city. And as the Taliban is taking over the country, Biden has been in his Deleware home instead of showing leadership from the White House.

Biden blames Trump for the disaster, but Biden ignored the pull-out plan developed by the Trump/Pompeo team.  Per Pompeo, the U.S. negotiated an agreement with the Taliban that at every step of the American withdrawal, there were benchmarks the Taliban had to follow, “If they did not live up to that piece of paper, to the words that they had put on the ground, we weren’t going to allow them to just walk away from any deal that they struck. We were going to go crush them,”  Biden just skipped out.

On July 5th, the U.S. abandoned Afghanistan’s Bagram airport base in the middle of the night without telling the Afghan troops they were leaving. That move destroyed the morale of the Afghanistan troops as the message from Biden was the U.S. no longer had their backs.

Not only was the withdrawal from Afghanistan done in a way that abandoned our allies, but the U.S. reputation that we would keep our promises and back up our words with actions is at the lowest point since the fall of Saigon in 1975. China, Russia, and Iran have already indicated they would be close to a Taliban-run Afghanistan.

Inflation is a major issue for the first time since Jimmy Carter was president. The government is spending money worse than a drunken sailor, and Biden is pushing for more spending. Some people who became unemployed because COVID closed the economy don’t return to work because they make more money collecting unemployment.

America has gone from energy independence to importing energy from other countries, raising costs and enriching many countries that aren’t allies. While cutting the U.S. production and canceling the Keystone pipeline, Biden has removed the restrictions Trump placed upon the Russian Nord Stream 2 pipeline, which will not only place Russian infrastructure inside NATO territory and thereby threatens NATOs member states but will make some European countries more dependent on Russian energy and political manipulation. Just a few months ago, America was the largest producer in the world and could sell to our European allies.

These are just some examples of how Obama was correct when he warned about Joe Biden. But still, Obama campaigned for Biden to be president. Was it because Obama didn’t want Trump to be POTUS again? Or since he knew how bad Biden would be, was it because he no longer wanted to be thought of as one of the worst presidents ever. In only seven months, Dementia Joe has sunk below Jimmy Carter and his former boss Obama.