Obama is Fighting To Steal Another Company’s Trademark, But He Didn’t Build That 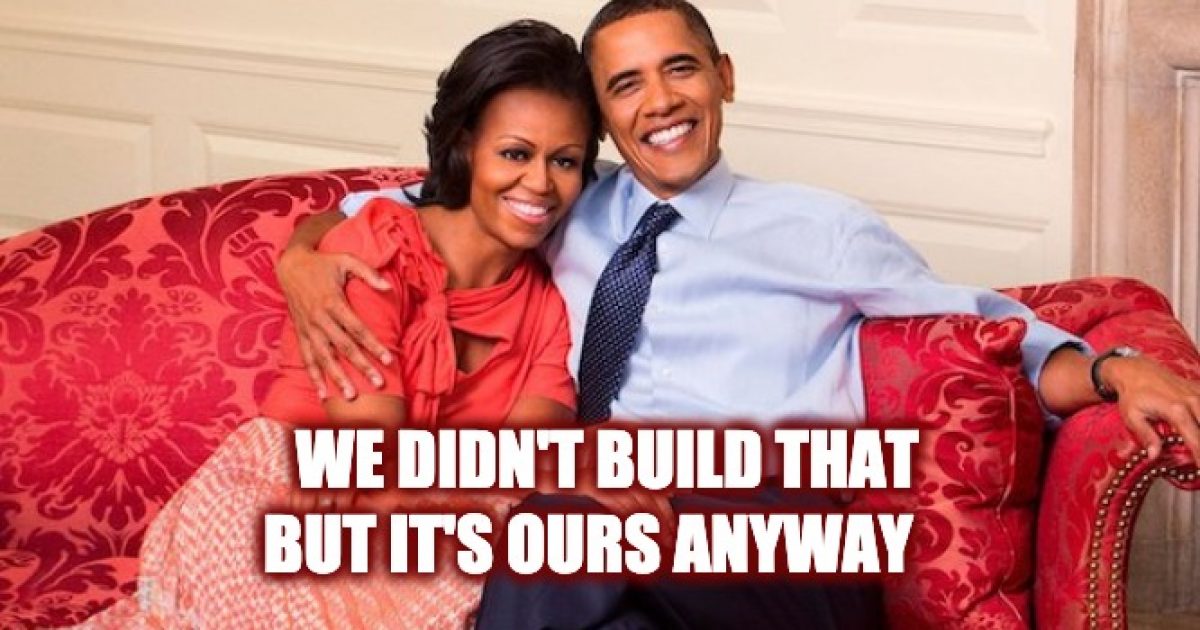 They didn’t build that, but it’s theirs anyway. Obama trademark

An attorney for an e-publishing company has accused Barack and Michelle Obama of “deplorable behavior” after the former first couple filed to cancel his client’s trademark which he’d been using since 2008, and take it for themselves.

The Hollywood Reporter states that the Obamas filed a petition to cancel the trademark of the company called Higher Ground Enterprises. The couple had formed Higher Ground Productions LLC to broker a lucrative agreement with Netflix to produce films and television series.

Higher Ground Enterprises is run by Hanisya Massey, who, according to her attorney Larry Zerner, is in the business of helping authors publish e-books. Her trademark is in Class 41, which includes entertainment services. Zerner says Massey has been using “Higher Ground” since 2008.

Zerner told Fox News that his client’s motive is “not political” and Higher Ground Enterprises simply wants to keep its name and avoid confusion.

The Obama’s initially argued that the two similar names could co-exist in the market, something the U.S. Trademark Office rejected in refusing to register the Obamas claim back in April. Just as he did in the White House, Barack Obama is acting as an entitled, arrogant man who has the right to take our stuff and our freedoms.

Rather than come up with a different name the couple decided to try and take it for themselves, filing a petition to cancel the trademark for Higher Ground Enterprises.

The attorney for the company, Larry Zerner, issued a statement condemning the Obamas

“The Obamas have known for almost a year that their Higher Ground trademark application was rejected by the USPTO because it infringed my client’s rights,” says Zerner. “Instead, of simply picking another name, the Obamas’ lawyers have now filed a meritless petition to cancel my client’s trademark so they can take it for themselves. This is really deplorable behavior. I hope that the Obamas realize that these actions are not consistent with the values they preach and that they instruct their attorneys to immediately dismiss the petition.”

Obamas accused of ‘deplorable behavior’ amid trademark dispute: 'Not consistent with the values they preach' https://t.co/egc5YVpKvm #FoxNews >> Every political season has "deplorables" Meet #thenewdeplorables

Even the ordinarily fawning Hollywood Reporter took a snarky jab at Michelle and Barack for engaging in this trademark fight.

“When they go low, we go high,” said Michelle Obama at the 2016 Democratic National Convention.

They go on to describe the duo’s actions as “aggressive.”

“The U.S. Trademark Office rejects an application for ‘Higher Ground Productions,’ so the former president and first lady get aggressive,” THR reported.

Obamas’ debut Netflix documentary slammed as 'lefty propaganda,' an attack on Trump https://t.co/KLhjulWVQU #FoxNews >> And what did folks expect?

In May of 2018, Netflix announced that they had signed the Obamas to a multiyear deal to produce “scripted series, unscripted series, docu-series, documentaries, and features.” The Obamas feel because they have that Netflix deal in place they deserve the use of the trademark.

That came less than two months after they had added former National Security Advisor, Ambassador to the United Nations, and deep stater Susan Rice, to their board. Based on that hire, perhaps they should name the production company, Unmasking Unlimited.

Look, either the Obamas lawyer screwed up and did a lousy job checking the trademark, or despite the fact the attorney found a similar name, the former POTUS and FLOTUS arrogantly thought they would be able to bully the trademark away for themselves. They didn’t consider that the trademark owner or the trademark office, forgot to drink the Obama kool-aid.