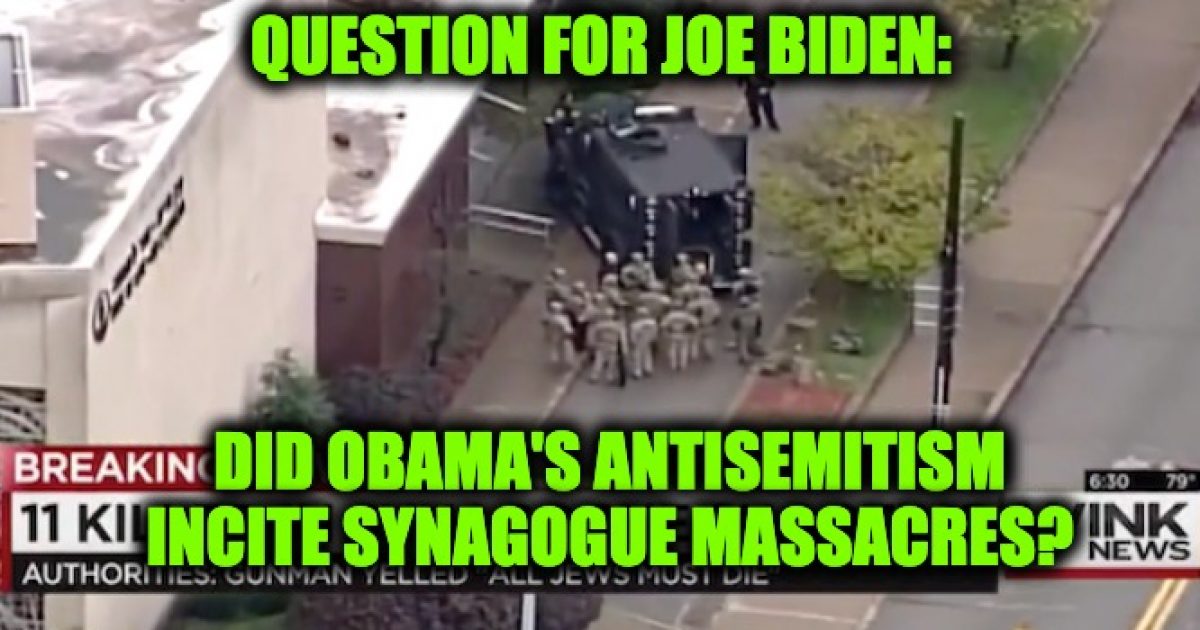 Saturday was a horrible day for America. Two mass shootings. Thirty-one people were killed and more than fifty injured. Liberals and the mainstream media (yes I know that’s redundant) were quick to place blame for the mass shootings on President Trump’s rhetoric and his followers.  Perhaps the most hypocritical example was former VP Joe Biden’s speech that directly linked the anti-Trump interpretation of President Trump’s rhetoric to this past weekend’s shootings. If Biden really believes what he says, he should be slamming the anti-Jewish hatred spewed by Barack Obama, the president for whom he worked.

Biden should be asked,  “If President Trump’s words incited this week’s shootings shouldn’t you be blaming Barack Obama’s anti-Semitic words and actions for the recent Synagogue shooting’s in Pittsburgh and Poway?   The only answer is yes!

For example, President Obama’s July 31, 2015 phone call organized by the Anti-Israel group J Street and other progressive Jewish groups could be summed up in one sentence. Please help because those rich people are helping those warmongering Jews to fight this incredible Iran deal because they don’t like me and they want to start a war just like they did in Iraq.

In the 20-minute phone call Obama said over and over those opponents of the Iran deal come from the same “array of forces that got us into the Iraq war.” he identified those forces as a “bunch of billionaires who happily finance super PACs” are “putting the squeeze on members of Congress.”

In a meeting with a hand-picked list of Jewish leaders, Lee Rosenberg of AIPAC questioned Obama’s statement comparing people who object to the Iran deal with those who supported the invasion of Iraq because many anti-Semites claim the Jews pushed Bush into invading Iraq. Obama explained that Netanyahu supported the Iraq invasion (which is true). What the former-president left out was that the prime minister at the time was Ariel Sharon. Sharon strongly urged Bush not to invade Iraq.

Obama also forgot to mention that his vice president Joe Biden, both of his secretaries of state Kerry and Clinton, and his biggest ally in the Senate Minority Leader Harry Reid all supported the invasion of Iraq in Congress and now support his flawed Iran deal.

He even doubled down accusing the Jewish State of being a bunch of warmongers.  During an August 2015 speech at American University, Obama again tried to scapegoat the Jews, saying:

Yes, Israel opposed the deal, so did Saudi Arabia, Pakistan, UAE, Bangladesh and most of the other Sunni Muslim States vehemently opposed the JCPOA because of their fears that Shia Iran would use nukes to attack them. But Obama wanted to scapegoat the Jews, and the media was quiet.

Beginning with his first campaign for president, Obama surrounded himself with anti-Semites like General Merrel McPeak.  McPeak was the 2008 Obama for President Co-Chair who had an impressive resume of blaming our foreign policy on the “Jewish Lobby.”  Perhaps the best example of McPeak’s Antisemitism was when he was asked during an interview why there isn’t peace in the Middle East. He answered, “New York City. Miami. We have a large vote — vote, here in favor of Israel. And no politician wants to run against it.” (in other words, those pesky Jews, who control America’s policy on the Middle East).

One of his first presidential appointments was the anti-Semitic Chas Freeman who blamed his resignation on the evil Israel lobby (a nicer way of saying Jewish lobby). Actually, Chas, it was a lot less than an evil Israel lobby, much of it was the work of a few Jewish bloggers — one of whom was named The Lid who pointed out that you believed things like China was too gentle in putting down the Tiananmen Square protests, the Muslims discovered America and worse.

In 2015 former speaker Boehner invited two world leaders to speak to a joint session of congress. Both times the Speaker’s invitation was made on his own without first checking with the White House. The invitation of the Jewish leader Benjamin Netanyahu was criticized by Obaman; in fact, he encouraged his fellow Democrats to boycott the speech. The speech by the second world leader Pope Francis was celebrated despite the White House not being informed of the invite before it was made. The Catholic’s invitation wasn’t criticized only the Jew’s visit. I am not saying Netanyahu’s visit was criticized only because he is Jewish—I’m just pointing out a fact,

Obama denied Jewish ties to the Land of Israel which according to the State Department definition is anti-Semitic.  in his 2009 Cairo speech, Obama said Israel was only created because people felt guilty about the Holocaust.

Obama showed the world that he honored Antisemitism. His first Presidential Medal of Freedom honorees was Bishop Desmond Tutu and Mary Robinson. The friendliest thing Bishop Desmond Tutu ever said about Jews was “People are scared in this country [the US], to say wrong is wrong because the Jewish lobby is powerful.” He also said that “the Jews thought they had a monopoly on God.” 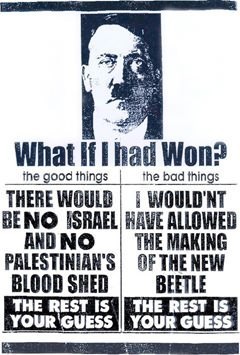 One of the flyers distributed at Mary Robinson’s Conference

During his presidency, Obama has allied himself with Al Sharpton who was a leader of the anti-Semitic pogrom in Crown Heights and incited the anti-Semitic firebombing of Freddy’s Fashion Mart in Harlem. He sent his closest adviser, Valerie Jarrett, to keynote an anti-Semitic ISNA conference whose discussions included: how key Obama aides are “Israeli,” proving Jews “have control of the world,” and how the Holocaust is the punishment of Jews for being “serially disobedient to Allah.”

In 2010 Obama’s National Security Adviser, Gen. Jim Jones gave the keynote speech at a Washington Institute For Near East Policy and started it out with an anti-Semitic “joke,” teaching the crowd that Jews are just greedy merchants in the same vein as Shakespeare’s Shylock.

Obama once called Zbigniew Brzezinski someone I have learned an immense amount from”, and “one of our most outstanding scholars and thinkers. Back in back in 2007, Brzezinski schooled the future president on foreign policy. The former National Security Adviser to Jimmy Carter is a Judeophobic conspiracy theorist, who believes the Jews control U.S foreign policy and Congress.

Of the anti-Semitic Occupy Wall Street movement, the President said, “We are on their side.”

Radical Islamists attacked the Kosher supermarket Hyper-Cacher (French for Super Kosher) in Paris on a Friday afternoon. The attack happened just before the Jewish Sabbath when they knew it would be crowded with Jews. Obama first insisted it was not an anti-Semitic act. And when the world leaders came together to march in Paris as a protest against the Charlie Hebdo shooting and the anti-Semitic Hyper-Cacher attack Obama was conspicuous in his absence.

During his last year as president, Obama’s State Department condemned Israel for allowing people to build houses on land on the western side of the Jordan River. But that’s only part of the story.  The property was legally purchased in 2009 by Dr. Irving and Cherna Moskowitz from a US Presbyterian Church. There were no complaints when the  Presbyterian Church owned it. Team Obama wasn’t objecting to the fact that houses were being built on that land back then. If the homes were intended for Christian or Muslim families, there would have been no issue.

Obama signed the bipartisan Trade Facilitation and Trade Enforcement Act of 2015, which contained provisions fighting the anti-Semitic BDS movement,  but upon signing the bill, announced that he would not enforce the anti-BDS provisions

One of Obama’s last acts as president was abstaining on a UN Security Council resolution. That abstention was named by the Simon Weisenthal Center as the most anti-Semitic act of 2016:

US President Barack Obama’s “abstention” was actually an endorsement of an onerous, one-sided resolution that, among other items, defines Judaism’s holiest site as “occupied Palestinian territory” and encourages nations to undertake the boycott of goods made by Jews in east Jerusalem and the West Bank. Make no mistake. This new resolution – developed with the Obama administration’s knowledge and some say with its collusion – is much worse and more dangerous than the United Nation’s notorious 1975 “Zionism equals racism” resolution.

NOT ONCE! Not once in all those (and other) cases where Obama and his team seemed to step over the line into Antisemitism territory were there questions from the media asking Obama if he had an issue with Jews. Not once did any of the mainstream media point out Obama’s possible anti-Semitism.  But they invent Trump’s racism. and if Joe Biden believes words create maniacs who want to kill people why was he silent with Obama?

Here’s the bottom line, I do not believe Obama’s anti-Semitic speech and/or actions motivated the shooting at the Pittsburgh or Poway Synagogue shootings. Nor do I think Bernie Sanders had anything to do with the shooting of Rep. Scalise at a GOP baseball practice, or that Elizabeth Warren motivated the Dayton shooting. And I certainly don’t believe the liberal line that President Trump incited this weekend’s horrible massacres.

But if liberal politicians, media talking heads and especially Joe Biden are blaming Trump’s words for the massacres in Dayton and Ohio, then it is just as legitimate to blame Obama for the horrible synagogue shootings in recent months.