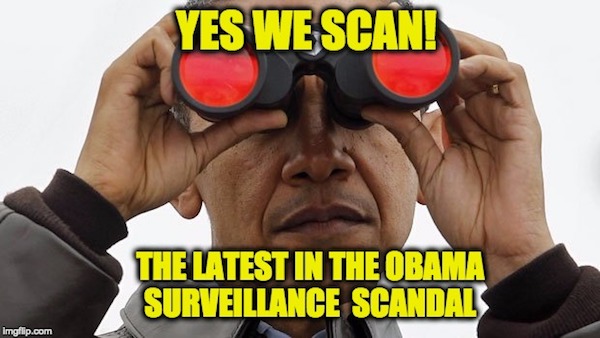 The Obama spying scandal continues to metastasize like some kind of cancer. Sadly, even as more evidence continues to percolate to the surface, the mainstream media continues to turn a blind eye to the real story unfolding in D.C.

According to the latest reports the data that was collected by the intelligence community on the Trump campaign and transition teams was chock full of private information that had NOTHING to do with national security or foreign governments. Representative Peter King (R-NY) told Fox News that the intel being gathered was more of a political dossier than it was anything pertaining to our national security. “This is information about their everyday lives–who they were talking with, who they were meeting, where they were going to eat, really nothing of substance of value unless you’re trying to lay out a dossier on somebody.” King said. “Sort of like in a divorce case where lawyers are hired, investigators are hired just to find out what the other person is doing from morning until night and then you try to piece it together later on.”

From the Daily Caller:

Former national security adviser Susan Rice reportedly requested the unmasked names of Trump associates incidentally picked up by intelligence services in between Trump’s electoral victory and his inauguration. Members of the Obama administration dispersed classified intelligence on Trump associates across government during that time. Questions surrounding the unmasking include whether she did so for political purposes, and what (if any) role she may have had in the illegal leaking of those names to the media.

This latest report offers support to whistleblower and former U.S. Attorney Joseph diGenova’s account of what was going on in the Obama administration over the last year. diGenova also told the Daily Caller that Rice had spreadsheets created to display all of the data they were sweeping up from the Trump campaign and transition teams. Earlier this week, Rice flat-out denied diGenova’s assertions (again, at least part of his story has now been proven true) but she also may have incriminated President Obama in wrongdoing when she told Andrea Mitchell that she was ordered by the President to do some of this spy-work. “Fulfilling the president’s request for such a report, they went back and scrubbed more reports. They began to provide more such reports to American officials, including myself.”

The House and Senate Intelligence Committees are currently investigating allegations the Obama administration spied on Trump associates – and possibly Trump himself – for as long as the year preceding his inauguration. And while former Obama National Security Adviser Susan Rice has been implicated as at least one of the officials who sought redacted names from surveillance transcripts, multiple lawmakers and investigators for the panel told Fox News the CIA, FBI and National Security Agency – all agencies in position to aid the probe – are not cooperating.

“Our requests are simply not being answered,” said one House Intelligence committee source about the lack of responsiveness. “The agencies are not really helping at all and there is truly a massive web for us to try and wade through.”

A Senate Intelligence Committee source said the upper chamber had the same experience.

“Any information that will help find the wide extent on the unmasking and surveillance is purposely not being provided,” said the Senate source.

An FBI spokesperson said the bureau is working in good faith.

“The FBI will continue to work with the congressional oversight committees on their requests,” the spokesperson said…

In a statement to Fox News, the NSA called the allegations “categorically untrue.”

“Allegations that the National Security Agency is ‘withholding information’ from congressional intelligence committees investigating Russian interference in the 2016 election are categorically untrue,” the statement said. “NSA fully supports the committees’ work. We have already made available significant information in response to their requests, and we look forward to continuing to work with them in the execution of their important responsibilities.”

Sources within the NSA said they are watching the investigation closely, with one telling Fox News, “A number of people saw a lot of very questionable stuff. [The Obama administration was] using national assets and intelligence for politics.”

We need to get to the bottom of this story. The longer it drags on the more damage the Trump administration will suffer. Right now, the Democrats continue to hurl attacks, mostly about Russia, at the President but still no evidence of wrongdoing has been found (and the Obama administration apparently found no evidence even though they watched him for almost a year). So, the sooner it can be proved that someone was spying on Trump, the sooner the real story should become the focus of media attention , and the sooner American should punish Democrat for their behavior.