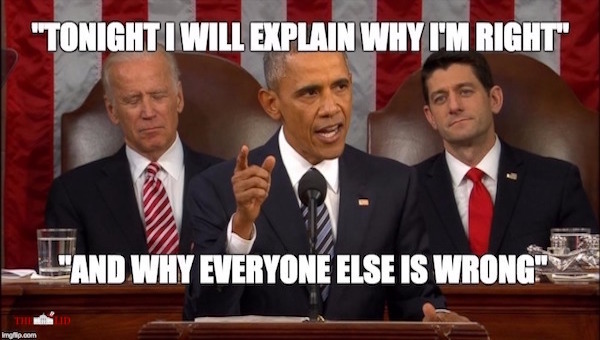 Obama talked about race relations during his farewell speech on Tuesday evening—funny though—he left out the part about how much race relations have deteriorated during the past eight years.  The Man has no clue.

During President Obama’s farewell address in Chicago, he talked about race relations. He remarked that “the effects of slavery and Jim Crow didn’t suddenly vanish in the ’60’s.” He also said that when minority groups voice discontent or wage peaceful protest, they’re not doing so to get special treatment. They’re only demanding the equal treatment that the founding fathers promised. Here’s what he said:

“Going forward, we need to uphold laws against discrimination – in hiring, and in housing, and in education, and in the criminal justice system. That is what our Constitution and highest ideals require.

“But laws alone won’t be enough. Hearts must change. They won’t change overnight. Social attitudes oftentimes take generations to change. But if our democracy is to work the way it should in this increasingly diverse nation, then each one of us need to try to heed the advice of a great character in American fiction Atticus Finch, who said, ‘You never really understand a person until you consider things from his point of view…until you climb into his skin and walk around in it.’

“For blacks and other minority groups, that means tying our own very real struggles for justice to the challenges that a lot of people in this country face – not only the refugee, the immigrant, the rural poor, the transgender American, but also the middle-aged white guy, who from the outside may seem like he’s got advantages but has seen his world upended by economic, and cultural, and technological change. We have to pay attention and listen.

“For white Americans, it means acknowledging that the effects of slavery and Jim Crow didn’t suddenly vanish in the ‘60s; that when minority groups voice discontent, they’re not just engaging in reverse racism or practicing political correctness; that when they wage peaceful protest, they’re not demanding special treatment, but the equal treatment that our Founders promised.”