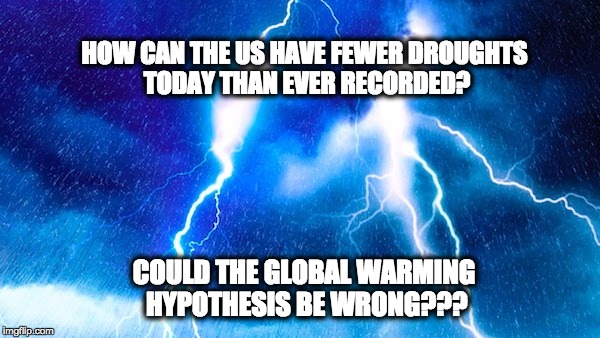 USA Today reported Thursday that the lowest percentage of U.S. land ever is currently suffering from drought conditions according to the U.S. Drought Monitor report. But how can this be the climate change hypothesis supporters say the earth is warming and causing droughts ????  So does former President Obama and much of the mainstream media. Could they have been wrong the whole time?  Now I am so confused.

Remember the bad old days of California (well the lack of water ones). The state was in the middle of a severe drought the climate change enthusiasts blamed it on their sacred unproven hypothesis including; The New York Times: California Drought Is Made Worse by Global Warming, Scientists Say; President Obama and California’s Governor Jerry Brown, advertised their  conclusion that climate change caused California’s 2011-2015 drought; Newsweek reported “Global warming is an emerging background effect on the year-to-year variations in drought caused by natural climate variations, such as El Niño and La Niña.”  There are thousands more examples.

The USA Today article says those claims were wrong:

“Drought has certainly been disappearing at a rapid rate this spring,” said meteorologist Brad Rippey of the U.S. Department of Agriculture. The five-year drought in California is practically over, with only about 8% of the state currently in drought.

The strong El Niño of 2015-16 may have caused the initial decrease last year, he said. “El Niño is historically a ‘drought-breaker,’ while La Niña is a ‘drought-maker.’ ”

A persistent low-pressure area sitting along the west coast of North America this year helped fuel the ongoing wet weather, USDA meteorologist Eric Luebehusen said. Low pressure causes air to rise, which allows clouds and precipitation to form. Those storms and wet weather then typically meander east-northeast across the central U.S., he said.

La Niña? But President Obama said??? Heck would the NY Times lie? I know…it has suddenly gotten cold! No I was outside in shorts and a t-shirt on Long Island today.

Granted while all those believe in the holy scriptures of global warming were saying man made climate change was causing the droughts reasonable people were pointing to the testimony of Professor Roger Pielke Jr before the Senate Environment and Public Works Committee.

“It is misleading and just plain incorrect to claim that disasters associated with hurricanes, tornadoes, floods or droughts have increased on climate timescales either in the United States or globally,”

Or that in  May of 2014 Professor Pielke published a graph that shows the intensity of the planet’s droughts from 1982 to 2012. The graph shows that neither droughts nor their intensity have seen a growth trend during that 30-year period.

So lets face it…we warned them over and over.

There is one other major problem with their warming-drought theory. The earth hasn’t warmed in over 18 years.  At least it hasn’t warmed if you look at the satellite data which is the information the global warming supporters asked for…well, at least until it demonstrated that it’s hard to sell a global warming hypothesis when the global–ain’t warming.

As reported at Climate Depot:

Despite the warming effect of the powerful 2015/16 El Niño, the unfalsified satellite date show that the year 2016 did not produce any new significant global heat record compared to the 1998 El Niño year. […] The claimed global warming by the IPCC climate models has been missing for almost 20 years! And that with continuously rising atmospheric CO2 concentrations!”

Wait a second! Lets be fair here we don’t know if the climate change enthusiasts are wrong about global warming causing droughts…after all we haven’t had global warming for almost two decades. Of course without the warming, I suppose it doesn’t matter.