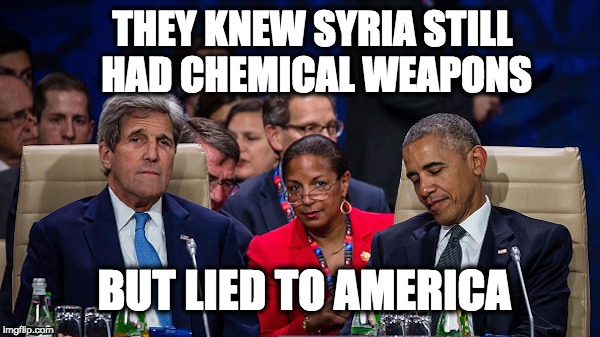 President Obama lied to America many times for the sake of his reelection and/or legacy.  There was the lie about the video being responsible for a spontaneous attack in Benghazi because of a YouTube video trailer for a lousy movie, the lie that the Iran deal includes inspections, snap backs and it delays a possible Iranian nuclear weapon for much more than the actual ten years, and speaking of Iran there was the lie that he didn’t pay a ransom for the hostages, but most relevant for recent news was the lie that Syria gave up all of its chemical weapons in 2013-they didn’t, he knew they didn’t, but bragged how successful his negotiated settlement was anyway.

How can I be so sure…well James Clapper said as much during congressional testimony in 2016. Sean Keely of The American Interest points to Clapper’s, the former Director of National Intelligence’s Feb. 2016 Congressional Testimony.

First Keely points the fact that Trump’s National Director Mentioned that when they picked targets for last week’s attack on the Syrian Airbase, they took care to avoid the areas where they thought Sarin gas was stored. Which raise the question how did we suspect that Sarin was being stored in certain areas of the airport?

Did the Obama Administration know that such depots still existed after its “historic” deal that supposedly removed all Syria’s chemical weapons?

“We assess that Syria has not declared all the elements of its chemical-weapons program to the Chemical Weapons Convention (CWC)…Despite the creation of a specialized team and months of work by the Organization for the Prohibition of Chemical Weapons (OPCW) to address gaps and inconsistencies in Syria’s declaration, numerous issues remain unresolved.”

Syria has carried out chemical weapons attacks even after the implementation of the September 2013 agreement, he said.

“We continue to judge that the Syrian regime has used chemicals as a means of warfare since accession to the CWC in 2013,” Clapper said.

He noted OPCW investigators’ conclusion that “chlorine had been used on Syrian opposition forces in multiple incidents in 2014 and 2015.” The regime was still dropping chlorine bombs from the air. “Helicopters — which only the Syrian regime possesses — were used in several of these attacks,” Clapper stated.

Chlorine attacks have been documented in Syria throughout 2014 and 2015, while one group of Syrian doctors discovered at least 31 chlorine attacks in the country during a single 10-week span in 2015.

And it’s long been clear that at least some of Syria’s chemical-weapons infrastructure remained in place past mid-2014. According to a July 2015 Wall Street Journal report, US intelligence agencies “concluded that the regime didn’t give up all of the chemical weapons it was supposed to,” while Assad “continu[ed] to operate weapons-research facilities.”

Therefore while President Obama, Secretary of State Kerry, and of course the Obama Administration’s designated liar Susan Rice were telling America that their wonderful negotiations worked and all of Syria’s chemical weapons were destroyed– James Clapper and documented chlorine attacks proved they were lying. But six months after Clapper’s testimony, in the August 2016 issue of the Atlantic,  Obama’s designated foreign policy water carrier Jeffrey Goldberg, did his duty and wrote an article praising Obama’s decision to ignore his “red line” to punish the Assad regime if it ever used chemical weapons.

Even the liberal Politifact backed away from its earlier claim that Kerry’s 2014 statement “we got 100 percent of the chemical weapons out,” was mostly true

. Last Wednesday, Politifact published an article that said in part:

2014 claim from former Secretary of State John Kerry. Kerry said in a television interview that in Syria, “we got 100 percent of the chemical weapons out.”

When Kerry spoke in July 2014, the process seemed far along. Based on reports from the Organization for the Prohibition of Chemical Weapons — which later won the Nobel Peace Prize for its efforts — we rated that claim Mostly True. There were caveats about incomplete information, but at the time, international experts said the claim largely held up.

Given recent events, we have pulled that fact-check (you can read an archived version here) because we now have many unanswered questions.

We don’t know key details about the reported chemical attack in Syria on April 4, 2017, but it raises two clear possibilities: Either Syria never fully complied with its 2013 promise to reveal all of its chemical weapons; or it did, but then converted otherwise non-lethal chemicals to military uses.

One way or another, subsequent events have proved Kerry wrong.

Based on the evidence above Kerry wasn’t wrong, he was lying.

And on its way out the door in January of this year, the Obama Treasury quietly introduced new sanctions against Syrian officials involved in chemical warfare. Buried in the language sanctioning a particular official was a telling admission: “As of 2016,[Brigadier General Ghassan] Abbas has continued operating at locations in Syria associated with chemical warfare-related missions.”

Like Benghazi, the Iran Deal, and the Iran ransom, the deal to get rid of Syria’s chemical weapons was a scam. Syria never got rid of all of its chemical weapons and the Obama administration knew all along.  Except most of them lied about it.

Below is an audio of an NPR interview with the Obama administration’s designated liar Susan Rice. The interview took place in January 2017 and rice was bragging about the deal that removed the chemical weapons from Syria. That interview was almost  a year after James Clapper told congress they still had (and were using) chemical weapons, and only four days after the Treasury Department sanctioned Syrian officials for use of chlorine gas.

But none of that prevented the Obama administration’s designated liar from saying:

Listen to the Rice interview on the player below: