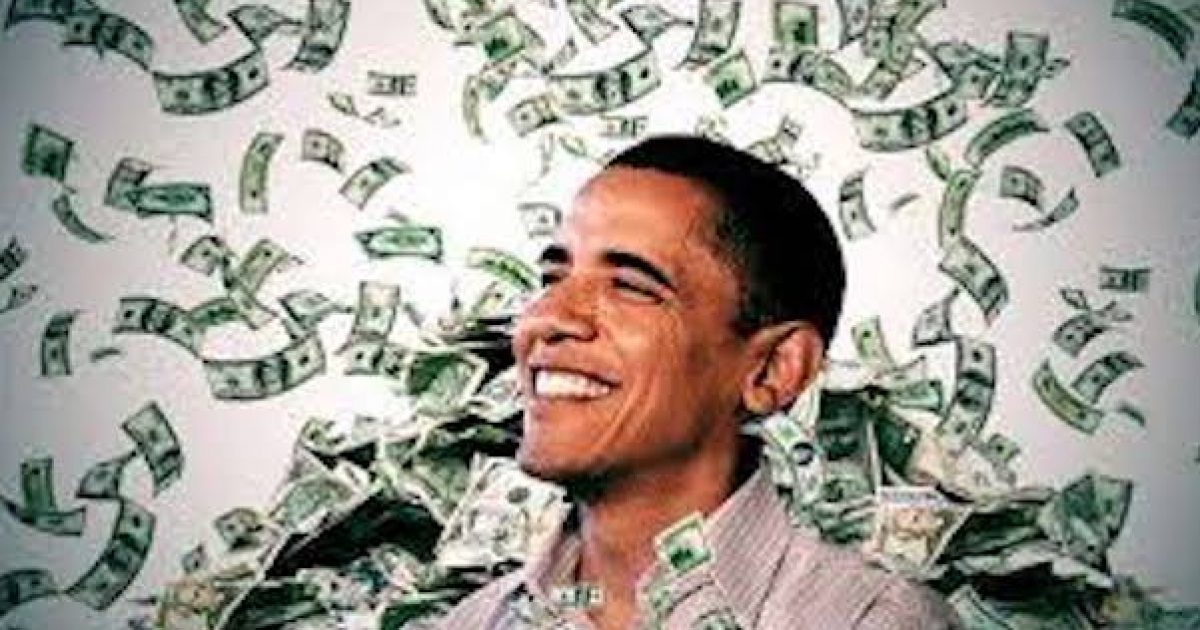 One aspect of peculiar operations in the Obama administration has gotten little press but merits a thorough investigation.  That aspect is the administration’s use of government agencies to move money around, in ways that surprised and troubled watchdogs, and often didn’t add up. Some of it may be used presently to fund political activism against Trump administration policies.

Some related topics have been covered at length, such as the money waste from the 2009 stimulus package, and the billions of dollars plowed by the taxpayer into Obama’s “green” energy cronies.

But I’m speaking here of a different type of activity.  In this type, the Obama administration used the authority of the executive branch to move money around in obscure and legally questionable ways.  For some of these transactions, there was enough transparency to at least determine where the money went.  For others, we’re still waiting to find out (and perhaps we never will).

Paul Sperry had a report on 23 September at the New York Post outlining one of the money trails we can follow.  He reports something that will probably bring blood to a boil in more than one quarter.

Settlement money awarded by the Obama Department of Justice to progressive advocacy groups – improperly, in the view of many – is being used to fund political activism against Trump administration policies.

Where did the money come from originally?  The Obama DOJ’s shakedown of big banks over the mortgage crisis.  Sperry explains:

The Obama administration’s massive shakedown of Big Banks over the mortgage crisis included unprecedented back-door funding for dozens of Democratic activist groups who were not even victims of the crisis.

At least three liberal nonprofit organizations the Justice Department approved to receive funds from multibillion-dollar mortgage settlements were instrumental in killing the ObamaCare repeal bill and are now lobbying against GOP tax reform, as well as efforts to rein in illegal immigration.

An estimated $640 million has been diverted into what critics say is an improper, if not unconstitutional, “slush fund” fed from government settlements with JPMorgan Chase and Co., Citigroup Inc. and Bank of America Corp., according to congressional sources.

Some of that $640 million went to the National Council of La Raza and the National Urban League, to be used in 2017 for campaigns against repealing and replacing Obamacare.

The National Community Reinvestment Coalition (NCRC), which also got some of the slush-fund settlement money, has been busy railing against efforts to privatize Fannie Mae and Freddie Mac and repeal portions of Dodd-Frank that have hit small businesses hard and have dogged economic recovery for years.

Liberty Unyielding contributor Hans Bader reported in June that Jeff Sessions had put a stop to the dubious practice of handing out settlement money to Obama’s political cronies.  He cited Sessions’ point that the purpose of the settlement was to compensate the actual injured parties – e.g., defrauded investors – and not to line the pockets of political activists.

As Attorney General Sessions noted, “unfortunately, in recent years the Department of Justice has sometimes required or encouraged defendants to make these payments to third parties as a condition of settlement. With this directive, we are ending this practice and ensuring that settlement funds are only used to compensate victims, redress harm, and punish and deter unlawful conduct.”

The political advantages of forcibly moving money around are obvious:

But it’s important not to miss the less obvious here too.  The NCRC noted above, got mortgage-crisis settlement money and has been using it to lobby against privatizing Fannie and Freddie.  That trail is of particular interest because the Obama administration used Fannie and Freddie to generate a slush fund of prodigious proportions – to the tune of more than $240 billion – between 2012 and 2017.

This feat was accomplished by diverting profits from the mortgage-guarantee giants into the U.S. Treasury, instead of using them to pay dividends and reimburse contributors dragooned into propping up Fannie and Freddie in the 2008 financial crisis.  The Obama administration kept Fannie and Freddie under conservatorship years past their date of certified restoration to health, and simply siphoned off billions into the Treasury in a process it called the Net Worth Sweep.

The purported reason was to protect Fannie and Freddie against future meltdowns.  But the mortgage giants were profitable at that point and needed only to be operated on a sound, accountable basis to be effectively protected.  What Obama was really doing was retaining arbitrary control over profits that should have benefited Fannie and Freddie’s shareholders – many of which are pension and other investment funds in which hundreds of thousands of working-class Americans have an interest.

Privatizing Fannie and Freddie would eliminate that slush-fund resource for future Democratic administrations.  So that’s one reason to look with a jaundiced eye on the NCRC’s settlement-funded lobbying against privatization.

But another concern continues to go by the wayside, as far as I have been able to determine.  What happened to the billions of dollars siphoned from Fannie and Freddie into the U.S. Treasury?

One possibility was raised by Jerome Corsi earlier this year (the Washington Bureau Chief for Infowars, whose analyses we are wary of due to the outlet’s often conspiracist editorial bent.  I issue that as a general caveat; in this case, the analysis is straightforward – if not dispositive – based on publicly validated figures and events).

Corsi suggests that profits sequestered from Fannie and Freddie were used to fund portions of Obamacare that Congress declined to pay for; namely, continued subsidies to Obamacare insurers after they were supposed to end.

Corsi may or may not be right about that.  (Earlier this year, Secretary Mnuchin said it didn’t happen.)  The real point is that we don’t know what was done with the billions in profits sucked off from Fannie and Freddie in the quarterly Net Worth Sweeps.

The Trump Treasury says the Fannie/Freddie profits have been used to fund general operations of the U.S. government.  But that’s not a benign statement.  It’s one that ought to bother us.

Money that flows, under solely executive discretion, from the mortgage giants to the Treasury can be used without Congress agreeing to the policy behind the use.

When Congress has appropriated funds for something the executive then manages, there is at least some semblance of transparency and accountability in the process, if only because there are two branches of government involved.

But when the executive branch can both appropriate and commit the funds, we end up not having that transparency and accountability.  “General operations of the U.S. government” isn’t good enough.  How do we know for sure that “general operations” doesn’t include “things Congress refused to fund,” or “back-alley drops to political cronies,” or even “some guy’s numbered account in the Cayman Islands”?

No matter how you slice it, the answer is, we don’t.  There shouldn’t be hundreds of billions of dollars that the executive branch can simply grab for itself and spend without any effective congressional oversight.

Money that’s a little too funny

This is just one of the troubling financial conundrums that cropped up during the Obama administration’s tenure.  A number of questions remain, for example, about the transfers of cash Obama made to Iran starting in January 2014.  These transfers may have involved literal pallets of cash, like the famous cartel-type payment to Iran in January 2016.  At least some of them seemed to be related to withdrawals of cash from the Treasury in repeated amounts just under $10 million.  The whole process, in all its particulars, appeared to be furtive and non-transparent.

Yet there existed ways to legally move cash to Iran through the front door if the purpose was aboveboard (see the first link in the last paragraph).  These methods were not used.  As Mark Dubowitz of the Foundation for the Defense of Democracies pointed out, Obama’s methods were so obscure that in September 2016, we still didn’t even know how much had been transferred to Iran in the previous two and a half years.

Another truly astonishing question to which we still have no answer is how the Department of Defense IG could find that the Army had piled up $6.5 trillion in improper accounting adjustments in 2015, hen the entire Defense Department budget that year was only $567 billion.

Maybe this was merely a problem of accounting practices, as faithfully repeated by the news media when this story broke a year ago.  The Pentagon is supposed to be ready for its first big audit on 30 September 2017, and perhaps we’ll get some answers after that.

But the concern is the still-unresolved situation itself.  If the books can’t be reconciled, then we have no means of accountability for how the money is being spent.  That’s an open hole through which we don’t know what may be going – or for how long.

If we’re very lucky, and it never occurred to anyone in DOD to take advantage of this interesting situation, it’s possible that all we’ve got is a ridiculous accounting mess.

But it’s worth noting that under the best of conditions, defense spending is very heavily politicized, from a crony as well as a partisan standpoint.  In the last years of the Obama administration – which were characterized by the sequestration problem for DOD along with everything else – the politicization was if anything more intense.

It doesn’t give one a warm, fuzzy feeling to know that in 2016, the DOD comptroller – a former Democratic staffer on Capitol Hill – wrote a highly political memo outlining a strategy to foil the House Republicans’ plan to gain better control over defense spending.

Following the Obama spending philosophy, this memo expressed a determination to keep as big a budget for overseas contingency operations (OCO) as possible, rather than submitting to the House plan to curtail it, and put more into buying force structure.  The reason for this, in the context we are discussing here, is that spending is less accountable in the OCO budget.

If Congress is buying parts, bombs, and maintenance hours, it’s relatively easy to tell whether they appear or not.  Paying for operations is another story.  The measure of effectiveness for the money isn’t so easily accountable.  How much fuel and rations are bought isn’t a measure of whether operations met any meaningful standard for national security requirements – and other things have to be bought as well, in comparatively small but politically interesting dollar amounts.  It’s a hard thing to quantify and reconcile intentions with outcomes for.

Paul Ryan’s thinking was that a new administration was a good time to require more formal justification for continued OCO spending in fiscal year 2017.

But that does more than reduce the president’s unfettered discretion over the operational use of the armed forces.

The more basic issue is how it constrains him to explain to Congress what he’s doing with defense dollars, period.  Ryan and the Republicans wanted more explanations and transparency.  The Obama DOD wanted to ensure there would continue to be less.

When the Army has $6.5 trillion in inexplicable accounting maneuvers, and the DOD comptroller himself is writing memos arguing – in highly political terms – to keep the less-accountable budget segment as big as possible, you can’t help noticing that the comptroller had also been, among other things, the Pentagon’s Senior Accountable Official for the American Recovery and Reinvestment Act of 2009 (AKA the “stimulus”).

There’s a lot we haven’t unpacked from the Obama years.  Some of it is running around out there funding the “resistance” today.  We still don’t know where other portions of it may be.