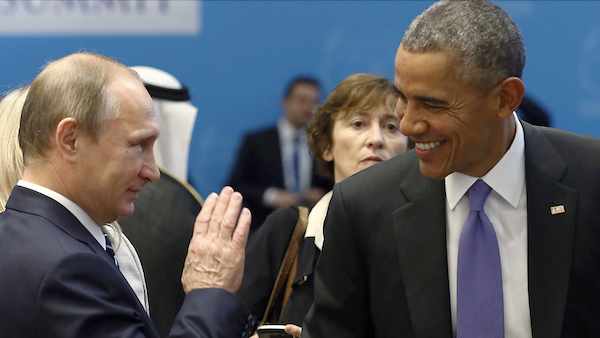 When Barack Obama wasn’t hanging around the White House last week with his cult, he gave an appalling performance at Chicago’s “Disinformation and the Erosion of Democracy” conference.

Hosted by the left-wing Atlantic Magazine, Obama contributed to more disinformation since the world he described bears zero resemblance to today’s.

After bemoaning that Vladimir Putin is not the same dude he knew years ago, Obama expressed no regrets for his mistakes a decade ago, other than some audacious word salad about taking disinformation more seriously.

Obama relied on compliant attendees and the odious Jeffrey Goldberg, Atlantic’s editor-in-chief, who moderated his portion.

Except for a conservative student-run outlet, no one dared question Lord Obama.

A generation ago, disinformation was a term describing how the KGB pushed fictional stories to discredit the West. Now that Democrats believe it means things people say that you dislike, they argue for government suppression of speech, especially on social media platforms.

On Labor Day weekend in 2013, the Syrian Civil War heated up.

Syrian President and all-around thug Bashar al-Assad crossed Obama’s now-notorious “red line” for action, causing Obama to claim that “At least, you know, over the last several decades, there’s been a recognition that neither country benefits from that kind of great power conflict.”

Taking a page from his naive “end of history” mindset, Obama claimed we had seen the last of traditional warfare because “we have the kind of relationship with them where we’re not getting in conflicts of that sort.”

A few days later, in a prime-time address, he explained, “If we fail to act, the Assad regime will see no reason to stop using chemical weapons.”

Obama didn’t act, of course, and Putin swooped to intervene on behalf of the Assad regime, quickly destroying the resistance while enabling the growth of ISIS.

This was only about 18 months after Obama surrendered a stable Iraq to fulfill a partisan campaign pledge; because terrorists decimated Iraq, the hapless president needed to redeploy some of our forces.

And to make matters worse, when the United States was eventually compelled to directly participate in the Syrian conflict, the battles were more dangerous.

While Obama predictably credits himself with a solid response to Russia’s 2014 invasion of Ukraine, he claims he could not do more. Why? As the last two months have demonstrated, Ukraine does not lack strength or national pride when resisting Russian aggression; they often lack the capabilities.

For all the liberal lies about George W. Bush or Donald Trump “alienating European allies,” the Obama administration desired a retreat from European affairs during its first term.

All the transparent progressives can post their Ukraine flags on social media now, but actions matter. When Kyiv needed to resist Russian aggression, the Obama administration refused to help.

With his former vice president now in charge and Russia on a rampage — including leading ignoble nuclear negotiations with Iran — the scenes are quite similar.

In the end, Obama’s revisionism isn’t surprising. Like most narcissistic jackasses, he takes zero responsibility for failures. At the “disinformation” conference, no one pointed out that Obama laid the groundwork for catastrophes we see in Europe and the Middle East today.