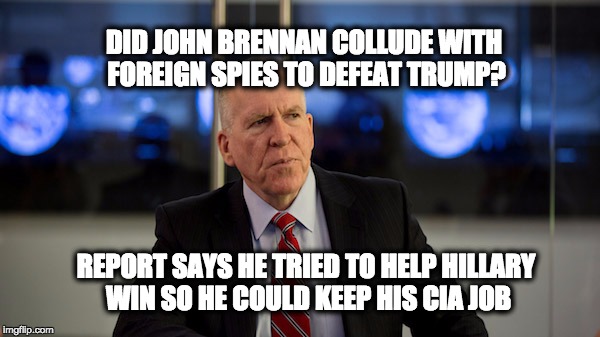 Thursday was NOT a banner day for the CIA (or the FBI). Dueling stories have exposed the profound failures, and immoral operations of the CIA during the Obama administration. In one story we finally learn that Russia was NOT behind the hacks that exposed so much embarrassing information from the CIA. Instead the CIA and FBI are now admitting that it was an insider, and the CIA is currently hunting for that leaker. The second story explains how former CIA chief John Brennan worked hard to undermine the possibility of Donald Trump becoming President by leaking intelligence from our European allies to the rest of the government and to the media. It’s a sordid, and ugly story that finally proves just how dastardly, and underhanded Brennan truly is.

CBS News broke the story on the CIA leaks:

CBS News has learned that a manhunt is underway for a traitor inside the Central Intelligence Agency.

The CIA and FBI are conducting a joint investigation into one of the worst security breaches in CIA history, which exposed thousands of top-secret documents that described CIA tools used to penetrate smartphones, smart televisions and computer systems.

Sources familiar with the investigation say it is looking for an insider — either a CIA employee or contractor — who had physical access to the material. The agency has not said publicly when the material was taken or how it was stolen.

WikiLeaks published the leaked material in March and CBS points out that WikiLeaks has said all along that they got the material from a CIA insider. What CBS fails to report is that for quite some time our intelligence community and the media have been blaming Russia for these leaks (WikiLeaks published the material in March but has had it for longer), when the truth is that Russia seems to have had NOTHING to do with it.

The UK’s Guardian newspaper broke the story on John Brennan though they attempted to shield the Obama/Clinton acolyte from blowback even as they explained his underhanded dealings.

(Our own Andrew West brought part of this story to you earlier today.)

The Guardian has been told the FBI and the CIA were slow to appreciate the extensive nature of contacts between Trump’s team and Moscow ahead of the US election. This was in part due to US law that prohibits US agencies from examining the private communications of American citizens without warrants. “They are trained not to do this,” the source stressed.

“It looks like the [US] agencies were asleep,” the source added. “They [the European agencies] were saying: ‘There are contacts going on between people close to Mr Trump and people we believe are Russian intelligence agents. You should be wary of this.’

The reality is that our agencies weren’t “asleep,” they too could see the interactions, there just wasn’t any reason to think that the connections between some Trump team members and Russia was underhanded. While we in the United States believe in due process and the need for the government to have “probable cause” before accusing people of wrongdoing, apparently in Europe, no such probable cause is necessary.

The American Spectator explains what the Guardian‘s report had really uncovered. Here’s a hint, it wasn’t wrongdoing by Trump… but by John Brennan and the CIA:

Seeking to retain his position as CIA director under Hillary, [John] Brennan teamed up with British spies and Estonian spies to cripple Trump’s candidacy. He used their phony intelligence as a pretext for a multi-agency investigation into Trump, which led the FBI to probe a computer server connected to Trump Tower and gave cover to Susan Rice, among other Hillary supporters, to spy on Trump and his people.

John Brennan’s CIA operated like a branch office of the Hillary campaign, leaking out mentions of this bogus investigation to the press in the hopes of inflicting maximum political damage on Trump. An official in the intelligence community tells TAS that Brennan’s retinue of political radicals didn’t even bother to hide their activism, decorating offices with “Hillary for president cups” and other campaign paraphernalia…

Any other CIA director would have disregarded such a flaky tip, recognizing that Estonia was eager to see Trump lose (its officials had bought into Hillary’s propaganda that Trump was going to pull out of NATO and leave Baltic countries exposed to Putin). But Brennan opportunistically seized on it, as he later that summer seized on the half-baked intelligence of British spy agencies (also full of officials who wanted to see Trump lose).

The truth is clear, Obama’s intelligence community worked hard to scuttle Donald Trump’s presidential aspirations and ensure that Hillary Clinton would become President. When that didn’t work, they turned to the media for help undermining the newly elected president and the media embraced the farce with gusto. The nighttime tales of Russian terror are nothing more than fairy tales told by Obama’s cronies and regurgitated to the American people by a complicit media that seems willing to believe and repeat any negative story they hear about Donald Trump.