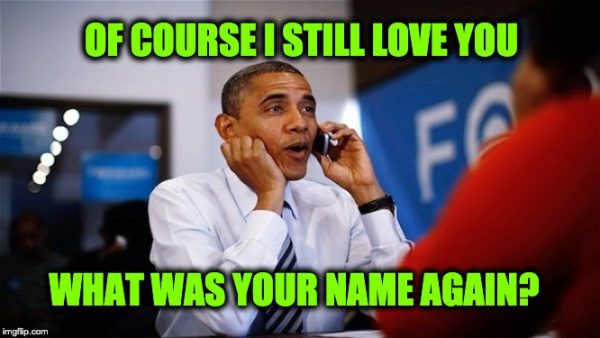 Reports have surfaced that former President Barack Obama called Joe Biden to offer congratulations after his campaign-salvaging victory in the South Carolina Democratic primary this past weekend. If true, this places Biden in a class by himself. No other candidate who won a primary has received a similar congratulatory message from the former president.

Bloomberg News reports that despite the call, “Obama has said that he will not endorse a candidate in the Democratic primary.” According to the article, two sources “familiar with the former president’s thinking … are skeptical an endorsement from the former president would shake up the race and believe it could even backfire.”

Biden has repeatedly invoked Obama’s name during the campaign, despite his former running mate leaving him twisting in the wind while Sanders built significant momentum.

“You launched Bill Clinton, Barack Obama to the presidency. Now you launched our campaign,” Biden told supporters after his victory in South Carolina.

"You launched Bill Clinton, Barack Obama to the presidency. Now you launched our campaign."

That said, one could easily point a finger at Obama as the man most responsible for Bernie’s success and Biden’s – up until this point – failures. In fact, the former president has seemingly offered more subtle support for Elizabeth Warren than his former vice president.

Speaking at a private event on leadership in Singapore in December, Obama suggested a woman would make a better leader than any man. “Now women, I just want you to know; you are not perfect, but what I can say pretty indisputably is that you’re better than [men],” he told the audience.

Obama’s putative phone call to Joe Biden may have been one of relief more than anything else. Establishment Democrats and those from the Obama/Hillary era want nothing more than to screw Bernie Sanders out of the nomination yet again. Donald Trump has been eager to capitalize on the divide in the Democratic party.

“It is happening again to Crazy Bernie, just like last time, only far more obvious,” Trump tweeted. “They are taking the Democrat Nomination away from him, and there’s very little he can do.”

Reports surfaced in January that Obama believes Sanders “is both temperamentally and politically unfit to beat Trump in the 2020 general election.”

While there may be no public endorsement, Obama is likely cheering Biden on behind the scenes if it comes down to a choice between him and Sanders for the nomination. Then again, he has scrupulously avoided backing his former second in command and even claims to have lost his half of the friendship bracelet he and Biden reportedly shared on Best Friends Day.