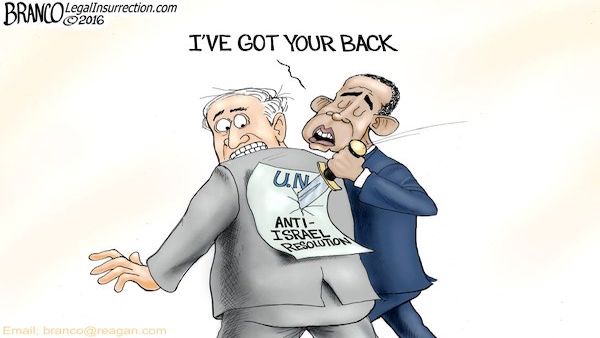 Less than a month before he left office, Barack Obama led the creation of U.N. Security Council (UNSC) Resolution 2334, which stated that Israel’s presence in Judea, Samaria, and East Jerusalem was a violation of International Law. Obama directed U.N. Ambassador Samantha Power to abstain when it came to a vote rather than veto the anti-Israel resolution in the U.N. Security Council. Since the abstention allowed the resolution to pass, the Obama action had the same effect as an anti-Israel U.N. Vote. A new report claims Obama wasn’t done. He had one last anti-Israel resolution to push through, but he was stymied by a threat by Russian President Putin that his U.N. rep would issue a veto, blocking it from passing.

On the day of the U.N. vote, President Trump’s choice for National Security Advisor General Mike Flynn spoke to the Russian Ambassador to the U.S. Sergey Kislyak about the upcoming UNSC vote. Per the transcript of the Flynn/Kislyak calls released on May 29th, 2020, Kislyak explained that Russia would have to delay it 2334, but if it came to a vote, Russia would have no choice but to vote for the resolution.

But after he got his UNSC Israel smackdown, Obama wanted to squeeze in one more slam at the Jewish-State.

Per a report in the Israeli newspaper Israel Hayom, right after the 2334 vote on December 23rd, 2016, President Obama and his anti-Israel foreign policy team started working on another UNSC resolution. This one would have forced Israel to agree to a Palestinian state based on the 1948 armistice lines.

Israel’s U.N. Ambassador Danny Danon heard about Obama’s plans and let the government in Jerusalem know what was happening,

When he was given the news, Prime Minister Netanyahu called Russia President Putin, warning him that if passed, the Obama resolution would severely hurt Israel and could undermine regional stability. Putin agreed, and per the report, the Russian President told Netanyahu that he was willing to veto the resolution. Russia is one of the five permanent members of the UNSC. The four are the U.S., China, France, and the U.K. A no vote by any of the permanent members block a UNSC resolution from passing. The Russian nyet would serve as a veto and prevent it from passing.

There was another Flynn/Kislyak call on December 28th, 2016, that seemed to corroborate the Israel Hayom report. This time the Russian Ambassador told Flynn that his country wasn’t going to support an upcoming U.S. pushed UNSC resolution.

When the U.S. heard that Russia would veto the Obama farewell anti-Israel resolution, they dropped the effort.

Apparently, the Obama team didn’t want Russia to seem more protective of Israel than the U.S., which would lead to their party losing the Jewish vote.  Obama spent much of his presidency screwing Israel, and his party continued in that manner after he left office. Netanyahu teased about the events above “approximately six months ago at an election rally in Maaleh Adumim.  He said he had asked a “friend,” whom he referred to as “the leader of one of the superpowers who holds veto power in the U.N. Security Council,” to vote against the resolution. Netanyahu credited that leader, whom he did not name, with stopping the resolution.”

Apparently, Netanyahu revealed more details about the Obama effort in a recent closed-door meeting, and someone in that meeting shared it with the newspaper. This Israel Hayom report fits in like a puzzle piece with the policies of Obama and his party, along with the transcripts of the Flynn/Kislyak calls.

Note the cartoon being used as the featured image above, was created by A.F Branco, who is an incredible political cartoonist. If you haven’t done so yet, go to his website, Comically Incorrect and sign up to get his cartoons every day—I do.