Obama Administration Spied on Americans-Shared The Data W/ Outside Groups 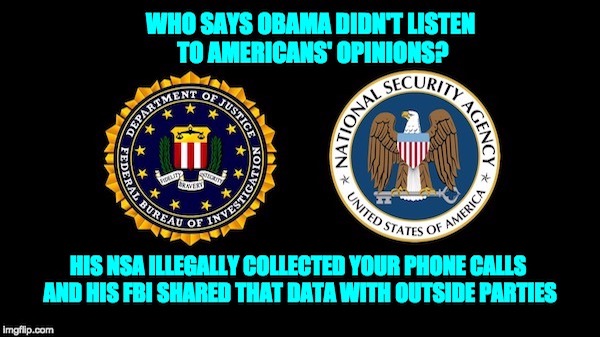 Fourth Amendment to the U.S. Constitution: The right of the people to be secure in their persons, houses, papers, and effects, against unreasonable searches and seizures, shall not be violated, and no Warrants shall issue, but upon probable cause, supported by Oath or affirmation, and particularly describing the place to be searched, and the persons or things to be seized.

In two different investigative reports by Circa.com, we’ve learned that not only did Obama’s NSA ignore the Fourth Amendment and collect information on Americans, but the FBI was sharing that information with outside parties. If you get your news from the mainstream media, you probably haven’t been exposed to either of these reports, because they are still protecting Barack Obama

When a nation is at war as America is now,  the government needs to find a balance between the need to protect her citizens. However even during a war that enters American territory such as the War on Terror, the federal government is not allowed to throw constitutional protections out the window. That’s one of the reasons for developing the Foreign Intelligence Surveillance Court (FISA). To grant search warrants for intelligence agencies to spy on foreign communications that involve American citizens.

Three days ago we learned that Obama’s NSA ignored the FISA court and its own regulations that were publicly promised to the American people, and violated those Fourth Amendment privacy protections while searching foreign intercepts that involved Americans without FISA court warrants. And OH BOY did they anger the FISA court. Circa.com used once-secret documents to reveal the Obama administration’s most serious constitutional abuses to date by the U.S. intelligence community.

More than 5 percent, or one out of every 20 searches seeking upstream Internet data on Americans inside the NSA’s so-called Section 702 database violated the safeguards Obama and his intelligence chiefs vowed to follow in 2011, according to one classified internal report reviewed by Circa.

The Obama administration self-disclosed the problems at a closed-door hearing Oct. 26 before the Foreign Intelligence Surveillance Court that set off alarm. Trump was elected less than two weeks later.

The normally supportive court censured administration officials, saying the failure to disclose the extent of the violations earlier amounted to an “institutional lack of candor” and that the improper searches constituted a “very serious Fourth Amendment issue,” according to a recently unsealed court document dated April 26, 2017 (embedded below).

This raises a question about all of those excuses by Susan Rice about “incidental collection” of American’s data When communications of American citizens are incidentally picked up during the surveillance of others, their identities are to remain secret so their names are usually redacted or identified by a generic term such as “American One.” Sometimes an intelligence agency requests to know the names behind those generic terms, and that’s called unmasking.

The story gets worse. As a follow-up, Circa used the same document  (embedded below) to demonstrate that the FBI shared that raw intelligence about American citizens with unauthorized third parties. You may remember that in his testimony days before he was fired Comey told lawmakers the FBI used  espionage data gathered about Americans without a warrant only when it was “lawfully collected, carefully overseen and checked.” That seems to be a lie.

Once-top secret U.S. intelligence community memos reviewed by Circa tell a different story, citing instances of “disregard” for rules, inadequate training and “deficient” oversight and even one case of deliberately sharing spy data with a forbidden party.

The FISA court ruling embedded below details hundreds of violations taking up almost 10 pages of violations of the FBI’s privacy-protecting rules under Comey that was not “lawfully collected, carefully overseen and checked.”

In fact the FBI  even admitted to the FISA court that their violation “ranged from illegally sharing raw intelligence with unauthorized third parties to accessing intercepted attorney-client privileged communications without proper oversight the bureau promised was in place years ago.”

“The Court is nonetheless concerned about the FBI’s apparent disregard of minimization rules and whether the FBI is engaging in similar disclosures of raw Section 702 information that have not been reported,” the April 2017 ruling declared.

The court isn’t the only oversight body to disclose recent concerns that the FBI’s voluntary system for policing its behavior and self-disclosing mistakes hasn’t been working.

The Justice Department inspector general’s office declassified a report in 2015 that reveals the internal watchdog had concerns as early as 2012 that the FBI was submitting ‘deficient” reports indicating it had a clean record complying with spy data gathered on Americans without a warrant.

One of the things we learned about Obama even before he was inaugurated in 2009 that he had little regard for the freedom’s guaranteed by the U.S. Constitution. What these documents reveal is even when his administration got caught and put in safeguards President Obama’s administration disregarded American’s Fourth Amendment protections.

While the actual contents of the items saved, unmasked, and provided to outside groups were not revealed, congress should investigate in order to explore whether some of the contents was collected from the Trump campaign and/or transition.