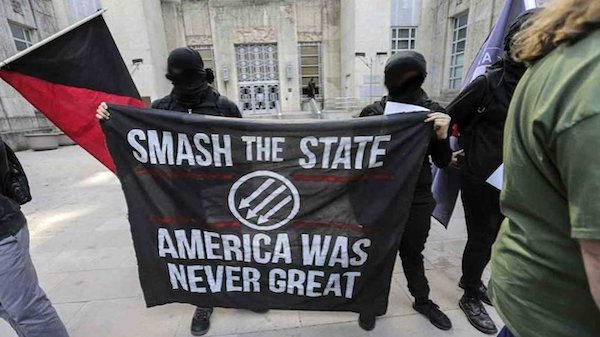 Saturday night in Oakland: rioters marched through the streets of the city chanting “Death to America” to the sound of breaking glass. They have apparently commandeered the chant of Obama’s favorite terrorists in Iran. Is that cultural appropriation? Of course, they were mostly shrieking it rather than actual chanting, if that makes a difference. Plus unlike Obama’s favorites, the Oakland rioters weren’t screaming death to Israel.

ANTIFA march down the streets of Oakland, CA chanting "Death to America" to the sound of smashing glass. #BidensAmerica pic.twitter.com/GbKBRoFtEV

Violent rioters chant on the streets of Oakland, CA

So why does the corporate media and Democratic Party insist they are peaceful protesters? pic.twitter.com/g2t1fffKzm

The Oakland Police Department stated that

Some within crowd are throwing objects and pointing lasers at officers. Penal Code 417.25 makes it a crime for a person to point a laser scope, or a laser pointer, at another person in a threatening manner. The offense is a misdemeanor, carries a penalty of up to 30 days in jail. pic.twitter.com/cFmoHzu4uR

San Francisco CBS local conveniently left out the chants of “Death to America,” but the progression of the night’s riots is in the story. They reported

On Friday evening, Oakland police made more than a dozen arrests for various crimes including assault on an officer and a news crew with a laser pointer during protests throughout the downtown area.

Saturday night, police posted about the ongoing protests in Oakland shortly before 9:30 p.m., saying officers would “facilitate peaceful protests and demonstrations” while warning that any violent or disruptive behavior would not be tolerated.

Moments later, police were asking people to stay away from Grand Avenue due to protesters marching in the street and blocking traffic. More than 200 demonstrators marched along Mandana Boulevard.

Shortly before 10 p.m.police declared an unlawful gathering as clashes played out in the area of Mandana and Grand Avenue just off I-580.

At least one person was detained for vandalism, Oakland police say.

Oakland police tweeted out several videos of people in the crowd throwing water bottles at police and pointing a green laser at officers. OPD also reported rocks being thrown at them and protesters are using shields as weapons.

“Peaceful protests”- only 6 arrests. In Oakland, a Democrat-run city, whether those arrests will be prosecuted is a question.  Marxists have been indoctrinated with the idea that America is evil and the totalitarian approach is great. Co-opting the terrorists’ chant is just a natural progression that has been used at other riots recently. Hence, “Death to America.” Batten the hatches, America, this will only get worse, especially if Dementia Joe wins the election.