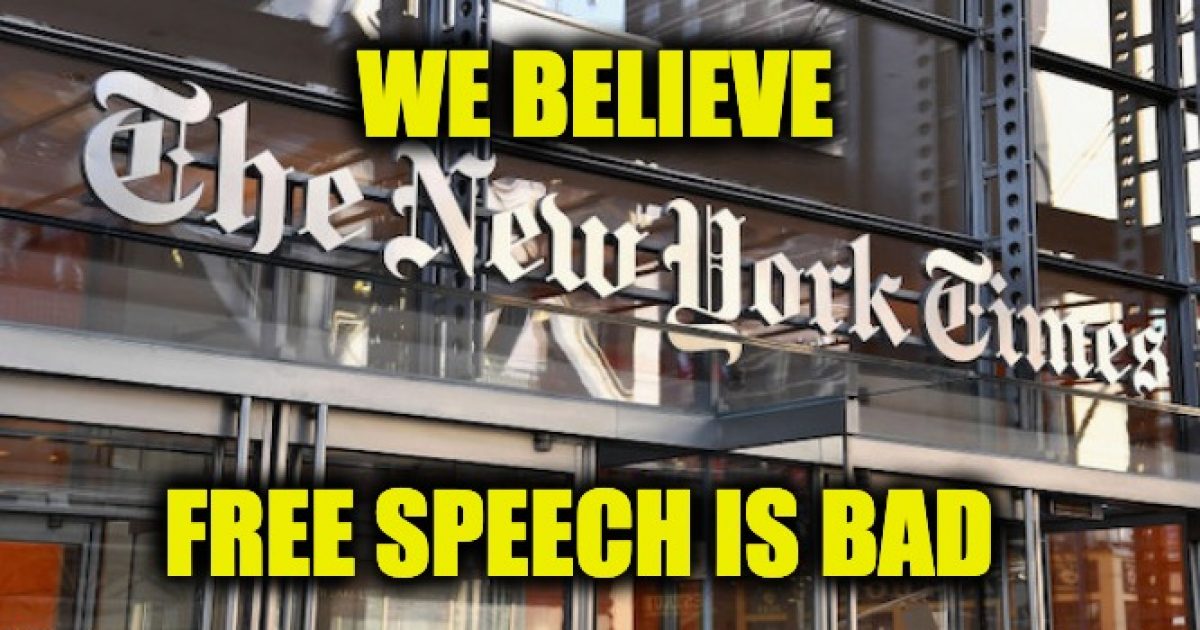 On Friday, the New York Times published an op-ed by staff writer Andrew Marantz titled, “Free Speech is Killing Us.”  In that piece, Marantz seems to argue that free speech — a bedrock principle of American democracy — is actually fueling violence and should be regulated by the government and tech giants like Facebook. NY Times free speech

“Having spent the past few years embedding as a reporter with the trolls and bigots and propagandists who are experts at converting fanatical memes into national policy, I no longer have any doubt that the brutality that germinates on the internet can leap into the world of flesh and blood,” he wrote.

“The question is where this leaves us. Noxious speech is causing tangible harm. Yet this fact implies a question so uncomfortable that many of us go to great lengths to avoid asking it. Namely, what should we — the government, private companies or individual citizens — be doing about it?”

After essentially admitting that censorship is worse than speech, he doesn’t really care to hear, Marantz then wonders:

I imagined the same conversation, remixed slightly. What if, instead of talking about memes, we’d been talking about guns? What if I’d invoked the ubiquity of combat weapons in civilian life and the absence of background checks, and he’d responded with a shrug? Nothing to be done. Ever heard of the Second Amendment?

Using “free speech” as a cop-out is just as intellectually dishonest and just as morally bankrupt. For one thing, the First Amendment doesn’t apply to private companies. Even the most creative reader of the Constitution will not find a provision guaranteeing Richard Spencer a Twitter account. But even if you see social media platforms as something more akin to a public utility, not all speech is protected under the First Amendment anyway. Libel, incitement of violence and child pornography are all forms of speech. Yet we censor all of them, and no one calls it the death knell of the Enlightenment.

He admits that free speech is “a bedrock value” that should be protected and argues against government censorship.  Then he turns right around and suggests the government compete with Facebook and Google.

“Congress could fund, for example, a national campaign to promote news literacy, or it could invest heavily in library programming. It could build a robust public media in the mold of the BBC. It could rethink Section 230 of the Digital Millennium Copyright Act — the rule that essentially allows Facebook and YouTube to get away with (glorification of) murder. If Congress wanted to get really ambitious, it could fund a rival to compete with Facebook or Google, the way the Postal Service competes with FedEx and U.P.S.,” he wrote.

I supposed he doesn’t remember that the Postal Service came first, and FedEx and U.P.S. were created because the government failed in the Post Office and every other time they tried to “run a business.”

But it seems the fear-mongering can be countered with actual facts:

It never ceases to amaze me how a seemingly intelligent person can talk about the dangers of an authoritarian administration in one breath and advocate for expanded powers in the next, without a thought of how it could backfire. https://t.co/IDWw17EzBR

Well, this IS the New York Times…

Of course, one can’t help but notice the irony:

“Free speech is killing us”, he said in the opinion section.

As much as I love the second amendment, I still think the first amendment is the more powerful.
Also pretty fresh that they use an opinion section of a newspaper to rail against free speech. Also hate speech is different for each person…https://t.co/ndaeztQEVW pic.twitter.com/jFiMvdbvgx