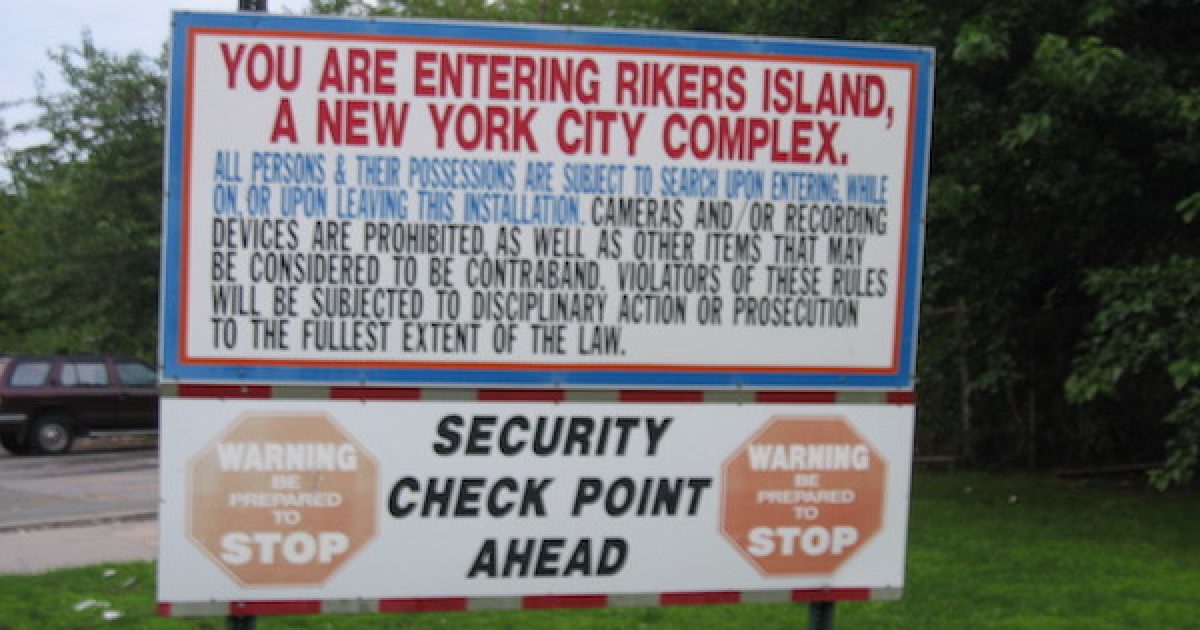 The New York City Board of Elections is launching a voter registration drive for inmates locked up in city jails, including the notorious Rikers Island complex.

City officials will pick up voter-registration paperwork and absentee ballots straight from the facility for those who have been incarcerated but have not yet been convicted of a felony.

It has been estimated that 75% (6,000 of a prison population of roughly 8,000) of the inmates on Rikers are eligible to vote, thanks to this new initiative because they have not yet been convicted for their crimes or remain in jail because they can not afford bail.

Of those 6,000 or so, certain individuals charged with crimes which may not render a felony conviction – sexual abuse against a minor and assault, for example – would also be eligible to vote.

“Voting access must be expanded and protected in our city. That applies to everyone, including people in custody,” Mayor Bill de Blasio gleefully announced.

De Blasio declined to provide an estimated price tag for this renewed effort to help criminals vote, but the “Get-Out-the-Vote-But-Keep-Them in-Jail” drive includes more than 1,200 posters encouraging detainees to cast their ballots, as well as daily counseling sessions and an arrangement whereby city officials can pick up ballots and registration forms.

“Reminding the incarcerated that their vote matters is a powerful way of reinforcing their ties to our community and is just as important as the many job training and re-entry programs we offer every day,” Correction Commissioner Cynthia Brann said in a statement.

New York Republicans, as you can imagine, were not too keen on the idea of providing a boost to the voting process for criminals

“Andrew Cuomo and Bill de Blasio are so desperate to buy votes and cater to the radical Left they are relying on dangerous criminals to win elections,” NYGOP Chairman Ed Cox said in a statement.

“The insanity started when Cuomo used his executive power to pardon killers and sex offenders to give them the right to vote – a great number of which are already back in jail.”

“Today, we learned Bill de Blasio has directed a voter registration drive into Rikers Island for thousands of inmates charged with any crime outside a felony, which includes sexual abuse against a minor and assault, among others,” Cox continued.

NY Dems pulling out all the stops to buy votes. Step 1: allow felons, including cop-killers, sex offenders right to vote. Step 2: go into Rikers to register them. Outrageous. https://t.co/Qtuynx4vAK

Just two weeks earlier, Cuomo announced that he was pardoning seven illegal aliens and granted conditional pardons to well over 70 sex offenders, to get more votes.

Even better, those sex offenders and other like-rewarded criminals now have the right to vote after their release under an executive order signed by Cuomo in April. And in May he issued conditional pardons to over 24K parolees including cop killer Herman Bell to allow them to vote.

.@NYGovCuomo is granting dozens of vile and dangerous sex offenders pardons so they can vote?! RT if you are disgusted by this and think we need a new Governor like @marcmolinaro with the right priorities! https://t.co/snpZkchSZz

“It’s stunning that in the state with the highest taxes, worst economic outlook, and least friendly business climate, these are the Cuomo-de Blasio priorities,” Cox scoffed.

It’s not really. Cuomo and de Blasio are merely pandering for votes from their base, which apparently consists of sex offenders and people waiting to be charged with a serious crime.