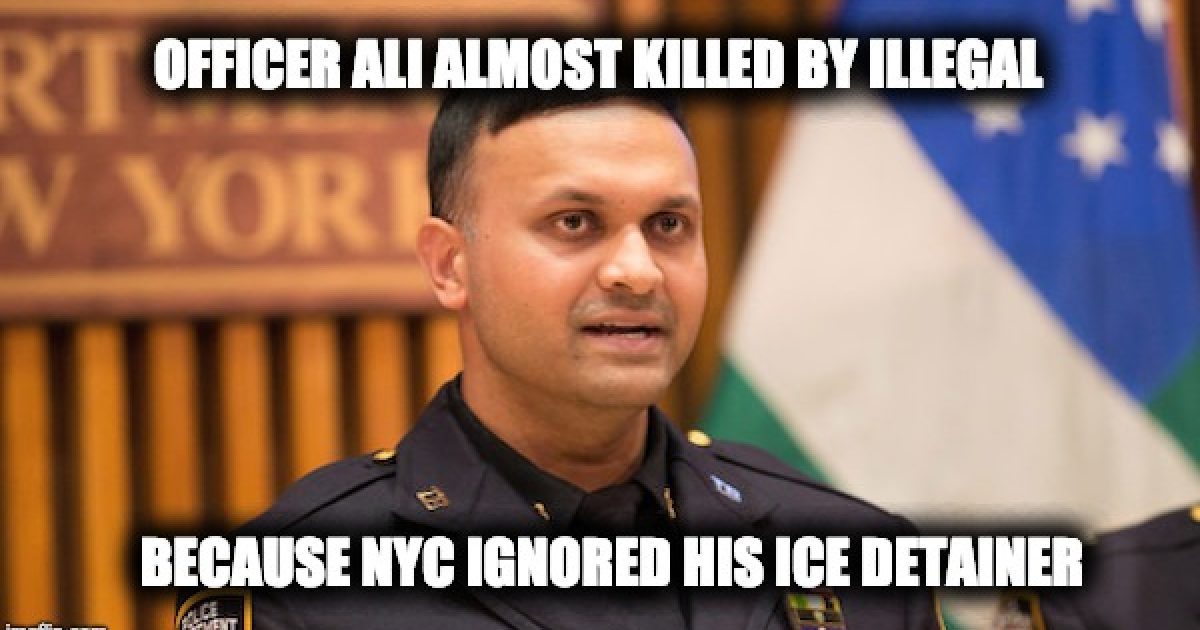 One of five homeless men who attacked an NYPD officer on a subway platform is reportedly an illegal immigrant who had multiple detainer requests from ICE ignored by city officials.

Officer Syed Ali, an Iraq and Afghanistan veteran, was recorded in a viral video that showed him trying to fend off multiple attackers without ever pulling his gun.

He was helping a woman who was being harassed at the subway station. The men didn’t appreciate law enforcement stepping in and repeatedly menacingly approached him.

“I can’t tell you what would be the next thing, other than that I want to go home,” he said. “I bet every police officer in this city thinks exactly the same thing: we’re going home.”

Ali, who’s married and lives in Brooklyn, spoke publicly about the altercation for the first time as his three alleged assailants were awaiting arraignment on charges including riot.

“Justice has been served,” Ali said.

He fought off the attackers one by one using his baton and his feet as weapons. As a result, nobody was seriously hurt, though the officer would undoubtedly have been justified in using further force had he feared his life was in danger.

The NYPD officer seen in viral footage fighting off a group of men on a subway platform says he was "just trying to survive."

Officer Syed Ali was honored Thursday by city officials for his 'quick action.' "It was a perfect outcome. Nobody got hurt." https://t.co/KNaPgJBfsd pic.twitter.com/TVzDPmnD9T

Attacker Was Protected By City Officials

One of the five attackers sought – and found – a sanctuary in New York City.

According to SiriusXM radio host David Webb, officials ignored multiple ICE detainer requests for the man who would later attempt to assault a police officer.

Webb adds that Santos was also charged with another serious crime but managed to get treated with kid gloves on the matter.

“In April of 2017, he was charged with forcible touching which was then knocked down to harassment,” he said.

Sad: 1 of the vagrants who attacked #nypd officer Ali – Eliseo Alvarez Santos- had 2 ICE detainers & was arrested several times, including once for forceable touching. De Blasios policy of not complying w Federal law enforcement is endangering all of us. Hat tip @davidwebbshow pic.twitter.com/fF0WM6zeVP

Detainers Are Issued For a Reason

Former acting director of U.S. Immigration and Customs Enforcement, Thomas Homan, announced in June of 2017 that the Trump administration would be taking a new approach to enforcing immigration laws.

“We’ll issue detainers to anybody in the country illegally,” he explained during a House Appropriations subcommittee hearing, adding that ICE would also “put detainers on people that have not been convicted of a crime.”

“If you are in this country illegally, and you committed a crime by entering this country, you should be uncomfortable, you should look over your shoulder, and you need to be worried,” Homan said.

Why are detainers for illegals regardless of their criminal history so important to honor? Because if you wait until they commit another crime, as in the case of this attack on a police officer, it’s too late.

“If we wait for them to violate yet another law against the citizens of this country, it’s late,” Homan explained. “We shouldn’t wait.”

Webb reports that the decision to ignore the ICE detainers comes from the mayor’s office.

“The following policies are dictated by the mayor’s office — Bill de Blasio, his office,” he stated. “In April of 2018, a bench warrant was issued, but the warrant did not show up until his arrest on Sunday of this year.”

New York became a sanctuary city under Mayor Ed Koch, and when he was Mayor the President’s attorney Rudy, Giuliani, but Giulini’s version of sanctuary cities did not include people who were accused of, or committed a crime.

NYPD Commissioner James O’Neil said he would have to look into why the detainees, especially with a bench warrant out for Santos’ arrest, were ignored.

“They definitely should have been kept in custody if they had a warrant on them,” he told the Daily Caller.

Santos, along with two other men involved in the incident, was charged with obstructing governmental administration and riot. Santos had attempted assault, attempted criminal possession of a weapon and menacing added to his list of charges.

Because of Mayor DeBlasio’s extreme leftist stance on immigration, a cop almost got killed

Parts of this post were first seen at MentalRecession