New York Times Gets It Wrong Again! Paper Adds Over 800K To Total Of Kids Hospitalized With COVID 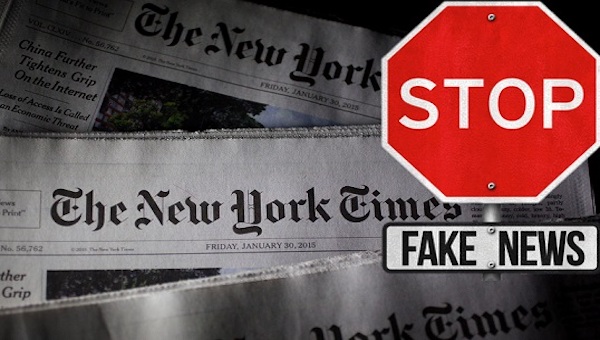 The New York Times issued a massive correction after the liberal newspaper misreported the number of COVID hospitalities among children in the United States by more than 800,000.

A report headlined “A New Vaccine Strategy for Children: Just One Dose, for Now,” by science and health reporter Apoorva Mandavilli, was peppered with errors before major changes were made to the story. The Times initially reported “nearly 900,000 children have been hospitalized” with COVID since the pandemic began, when the factual data in the now-corrected version is that “more than 63,000 children were hospitalized with Covid-19 from August 2020 to October 2021.”

As the former newspaper of record, which now acts as a public relations arm of the far left, the Times is often at the front line for legitimizing misinformation.  In the latest example, the paper claimed that ‘nearly 900,000 children had been hospitalized’ with COVID 19 when the actual number is ‘more than 63,000 children hospitalized from August 2020 to October 2021.’

This is not just adding a zero by mistake. It is a clear instance of either a reporter and presumably their editor had no idea how to read data or a blatant attempt to create a splash headline that would spread into the American consciousness as frighteningly real before anyone could get the truth out.  An honest look at the New York Times’ abuse of facts in the past would lead any objective observer to conclude that manipulation rather than incompetence is at the root of the “mistake.”

Remember, it was the New York Times that breathlessly ran with the story that Capitol Police Officer Brian Sicknick died from injuries sustained by being hit with a fire extinguisher on Jan. 6.  In mid-February, the Times quietly changed the story after the entire country was led to believe that the Jan. 6 events at the Capitol were violent.  The Coroner’s report on Officer Sicknick’s death revealed that he died of a stroke that was unrelated to the Jan. 6th Capitol events.

Facts matter and one thing that is obviously true is that the New York Times no longer cares about facts, having sacrificed truth on the altar of a Marxist narrative long ago.

The paper also botched actions taken by regulators in Sweden and Denmark and even bungled the timing of a critical F.D.A. meeting.

“An earlier version of this article incorrectly described actions taken by regulators in Sweden and Denmark. They have halted the use of the Moderna vaccine in children; they have not begun offering single doses. The article also misstated the number of Covid hospitalizations in U.S. children. It is more than 63,000 from August 2020 to October 2021, not 900,000 since the pandemic began.  In addition, the article misstated the timing of an F.D.A. meeting on the authorization of the Pfizer-BioNTech vaccine for children. It is later this month, not next week,” the lengthy correction stated in full.

I see this NYT reporter is meeting her usual standards today. pic.twitter.com/zZ3OV348PU