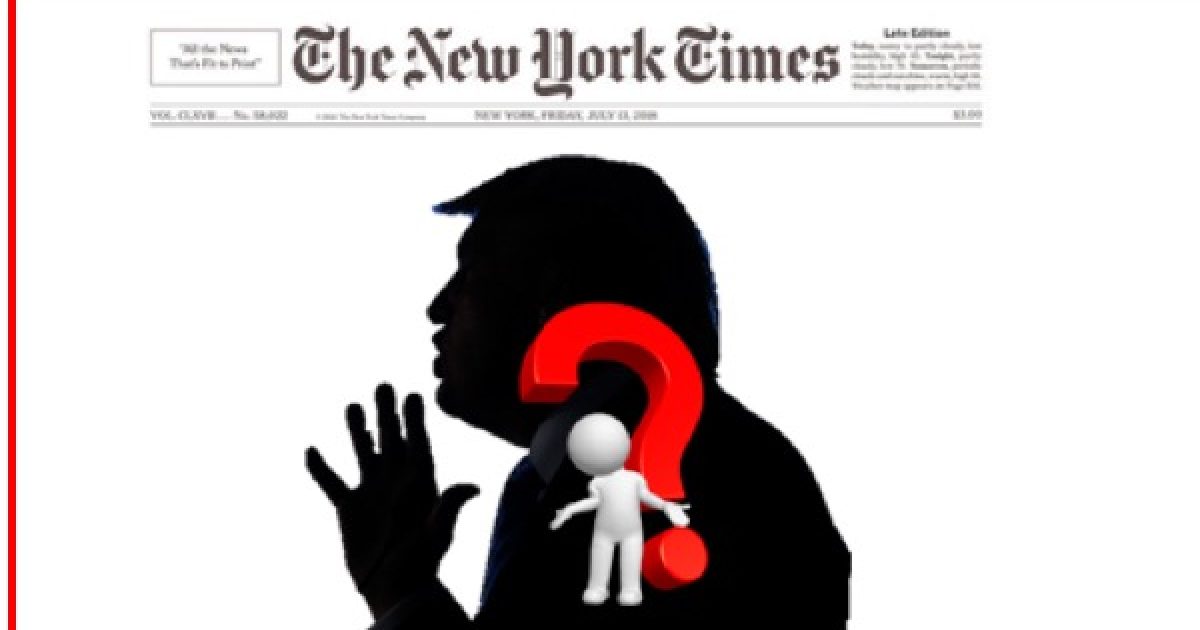 A column appearing in the NY Times in 1984 has resurfaced, in which it discusses real estate mogul Donald Trump’s uncanny ability to engage in fruitful negotiations and even openly wonders if he might one day disarm hostile countries as President of the United States.

It’s funny since the Times has now morphed into thinking the once brilliant negotiator is an incompetent clown.

Reality dictates otherwise, with the President engaged in talks to disarm North Korea and bring peace – a once unimaginable concept – to the Korean peninsula.

In the lengthy 1984 Times article, Trump is repeatedly hailed by friends and business rivals alike as a master negotiator.

“Our company has given up trying to negotiate costs with him,” the head of a construction company explains. “We just say: ‘Tell us what you want, you’re going to get it anyway.’”

The column then shifts to how this ability might translate on the biggest stage – negotiating with hostile countries as leader of the free world. The nation they bring up at that time is Syria, but the task at hand remains the same, and the Times clearly believes he can become the negotiator-in-chief.

In that 34-year-old interview, the future president spoke about his concern regarding nuclear weapons.

Asked to explain, he adds: What does it all mean when some wacko over in Syria can end the world with nuclear weapons?

He says that his concern for nuclear holocaust is not one that popped into his mind during any recent made-of-television movie. He says that it has been troubling him since his uncle, a nuclear physicist, began talking to him about it 15 years ago.

His greatest dream is to personally do something about the problem and, characteristially, Donald Trump thinks he has an answer to nuclear armament: Let him engotiate arms agreements – he who can talk people into selling $100 million properties to him for $13 million. Negotiations is an art, he says and I have a gift for it.

The idea thathe would ever be allowed to got into a room alone and negotiate for the United States, let alone be successful in disarming the world, seems the naive musing of an optimistic, deluded young man who has never lost at anything he has tried. But he believes that through years of making his views known and through supporting candidaes who share his views, it could someday happen.

Interestingly during his Press Conference with Teresa May on Friday, he said he also brought up his uncle in terms of nuclear proliferation.

Pres. Trump says nuclear proliferation “is the biggest problem in the world.”

“If we could do something to substantially reduce them—I mean, ideally get rid of them. Maybe that’s a dream.” https://t.co/Ak5N61XZBy pic.twitter.com/EWdJ9QASUi

It seems that nuclear weapons is a concern that has stayed with Pres. Trump.

In 1984, the New York Times told us that Donald Trump would be our best president.

Donald Trump is a lot of things. Stupid ain’t one of them. Look at what the New York Times said about him in 1984. This is amazing.https://t.co/Fx2G7Q4EPF

While some believed that these were the dreams and optimism of a naive Trump, the newspaper surmises that “through years of making his views known and through supporting candidates who share his views, it could someday happen.”

Fortunately, it did happen. And the United States, along with the rest of the world, is a better place for it.

President Trump has since been nominated for the Nobel Peace Prize following a summit with North Korea’s Kim Jong Un.

Trump has “taken a huge and important step in the direction of the disarmament, peace, and reconciliation between North and South Korea,” Norwegian lawmakers wrote in their nomination letter.

Who would have thought that the New York Times of all places called it 34 years ago? How much they’ve changed.