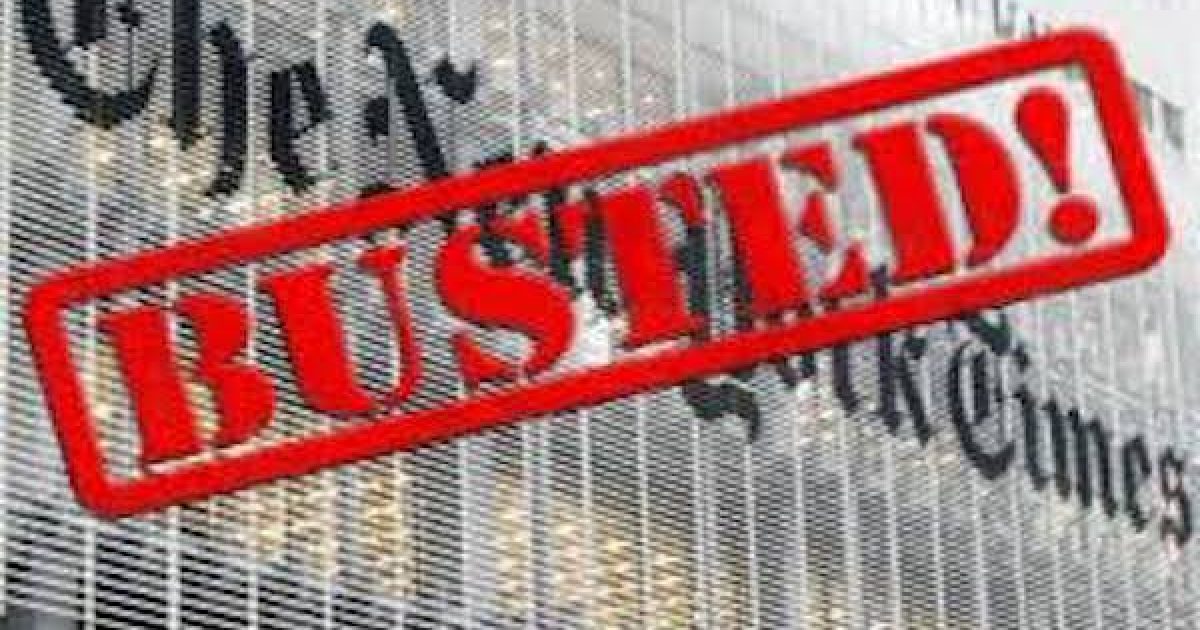 The title of a Saturday NY Times piece, by Michael D. Shear and Julie Hirschfeld Davis, is “Stoking Fears, Trump Defied Bureaucracy to Advance Immigration Agenda.” It is emblematic of the Times’s self-appointed mission to unseat the American president via weakly sourced innuendo and character assassination.

The last such piece, which ran two Sundays ago, accused Donald Trump of watching eight hours of TV a day. This one is intended to reinforce Times readers’ fear and anger over the president’s putative xenophobia and racism.

Like the previous article, this one packs as many insults into 4,400 words as Barnum & Bailey packed clowns into a tiny car. Hence, the implications of tardiness and hotheadedness in the opening sentence:

Late to his own meeting and waving a sheet of numbers, President Trump stormed into the Oval Office one day in June, plainly enraged.

Then comes the mud “meat” of the article:

According to six officials who attended or were briefed about the meeting, Mr. Trump then began reading aloud from the document, which his domestic policy adviser, Stephen Miller, had given him just before the meeting. The document listed how many immigrants had received visas to enter the United States in 2017.

More than 2,500 were from Afghanistan, a terrorist haven, the president complained.

Haiti had sent 15,000 people. They “all have AIDS,” he grumbled, according to one person who attended the meeting and another person who was briefed about it by a different person who was there.

Forty thousand had come from Nigeria, Mr. Trump added. Once they had seen the United States, they would never “go back to their huts” in Africa, recalled the two officials, who asked for anonymity to discuss a sensitive conversation in the Oval Office. [Emphases added]

To recap, of six officials who were either at the meeting or briefed about it, two claims (one based on secondhand testimony) that the president made these explosive insinuations.

The NY Times sourcing becomes even more suspect by the inclusion of a sidebar that reads:

The Times conducted over three dozen interviews with current and former administration officials, lawmakers and others close to the process.

That means that out of 36-plus sources consulted, one who was present at the meeting claims to have witnessed the president implying that all Haitians have AIDS and Nigerians live in huts.

In an effort to appear impartial, the article authors do provide the White House’s reaction to the charges:

Sarah Huckabee Sanders, the White House press secretary, denied on Saturday morning that Mr. Trump had made derogatory statements about immigrants during the meeting.

“General Kelly, General McMaster, Secretary Tillerson, Secretary Nielsen and all other senior staff actually in the meeting deny these outrageous claims,” she said, referring to the current White House chief of staff, the national security adviser and the secretaries of state and homeland security. “It’s both sad and telling The New York Times would print the lies of their anonymous ‘sources’ anyway.”

While the White House did not deny the overall description of the meeting [in earlier paragraphs the authors write that “tempers flared”], officials strenuously insisted that Mr. Trump never used the words “AIDS” or “huts” to describe people from any country. Several participants in the meeting told Times reporters that they did not recall the president using those words and did not think he had, but the two officials who described the comments found them so noteworthy that they related them to others at the time.

Then the authors return to the task of attacking Trump and the bitter clingers who voted for him:

Seizing on immigration as the cause of countless social and economic problems, Mr. Trump entered office with an agenda of symbolic but incompletely thought-out goals, the product not of rigorous policy debate but of emotionally charged personal interactions and an instinct for tapping into the nativist views of white working-class Americans.

It’s hard to see where there is room journalistically speaking for the Times to stoop much further.

Note: sources in the NY Times newsroom tell me the paper made up the story above hoping to smear the president. My sources’ claims have been backed up by the White House