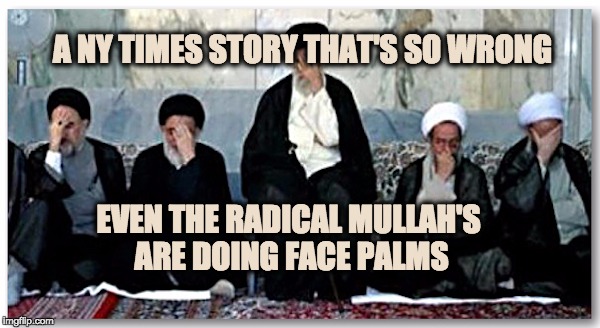 After President Donald Trump released his revised travel order, the left once again went wild with false claims about what it all meant. In particular, The New York Times jumped on the order and justified its criticism by making false claims. Typical liberal fake news.

In it’s story about Trump’s newest travel order, Glenn Thrush insisted that no terrorist has attacked the U.S. from any of the nations that are mentioned in the president’s temporary moratorium on travel. He went even further to claim that few Americans have been killed by terrorists inside the U.S.A. since 2001.

Here is how Thrush put it in his March 7 piece:

Since 2001, 18 of the 36 Muslim extremists who have engaged in attacks inside the United States were born in the United States, while 14 migrated here as children and would not have been stopped by the new vetting process, according to an analysis by Charles Kurzman, a professor at the University of North Carolina.

None came from the banned nations; Muslim extremists have accounted for 16 out of 240,000 murders in the United States since the terrorist attacks of Sept. 11, 2001.

First of all that last bit is 100% wrong. Thrush insisted that only 16 people have been murdered in the U.S. by Muslim extremists since 2001. But he is way, way off on his math.

Thrush must have forgotten about the Orlando nightclub attack where a Muslim extremist killed 49 innocent people. That is already a far sight more than the mere 16 Thrush claimed have been killed by Muslim extremists since 2001.

Then there was the murderous rampage in San Bernardino where two Muslim extremists, Syed Farook and Tashfeen Malik, killed 14 innocents in 2015.

Just those two incidents alone amount to 63 deaths of Americans inside the U.S.A., all killed by Muslim extremists. And these two attacks are only two of half a dozen more attacks that killed dozens of others.

So, right off the top, The New York Time’s Glenn Thrush shows that math is hard for liberals.

But in his NYT piece, Thrush had a second lie.

Notice that in Thrush’s piece he said that there has never been a Muslim from any of those countries who has killed Americans here at home. But this is simply untrue.

While no one was killed, in November of last year a Muslim from Somalia ran his car over a large group of people injuring 11 at Ohio State University. Then there was the man who knifed nine people in a mall in Minnesota while yelling “Allahu Akbar” in September. The second man was also a Somali.

Naturally as soon as conservatives began to complain about the paper’s lies, the original article was suddenly altered to remove the false information. The original language, though, is still seen at the re-posting of the piece by MSN.com.

So, while the liberal news media is rushing to attack President Trump for his policy aimed at keeping America safe, they are relying on lies spread by the organ of the Democrat Party, The New York Times.

Finally, you might recall Glenn Thrush as the man who even called himself a “hack” journalist.

Last year, several months before the presidential election, WikiLeaks unleashed a torrent of emails from Hillary Clinton’s campaign chief, John Podesta. Among those emails was one from Glenn Thrush.

In his email, Thrush was seen promising that he would send all his articles to Clinton’s campaign chief before submitting them to his publisher.

“No worries Because I have become a hack I will send u the whole section that pertains to u,” Thrush told Podesta in his email. “Please don’t share or tell anyone I did this. Tell me if I fucked up anything.”

When asked about this clear act of collusion with Clinton’s campaign, his then employer, Politico, claimed Thrush was juuuuust kidding. They said Glenn was just joking because he has a “self deprecating” sense of humor.

Yeah. Sure he was.

Speaking of the Podestas, John Podesta’s brother recently got in hot water. With all the attacks by the left on President Trump as a purported agent of the Russians, it turns out that the brother of Hillary’s campaign chief took $170,000 from Russia and never told anyone.

Worse, Podesta took the cash from the Russians to act as a lobbyist for them yet never registered as a Russian agent per lobbying laws.

This month it was learned that Tony Podesta, brother of Clinton’s campaign chief, took $170,000 over a six-month period to act as a representative of Sberbank, Russia’s largest bank.

Looks like Clinton is closer to Russian agents than Trump has ever been.