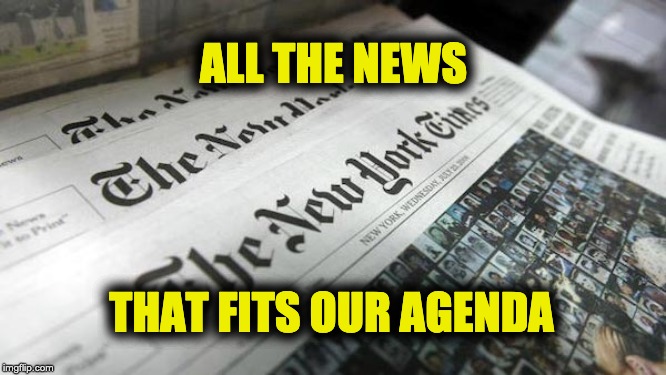 File this under another NY Times fail. TheTimes had to correct a pair of articles mentioning a Trump voter with buyer’s remorse after it was discovered he never actually cast a vote for the President or anyone else. He didn’t vote in 2016, Maybe the guy saw the improvement in the economy and dreamed he voted for President Trump–either that or he is a liar.

Mark Graham, a resident of Erie County, Pennsylvania, was initially featured in a video created by America Bridge, a Democrat PAC.

“I voted for Donald Trump in 2016 because I thought he would make a change,” Graham says in the spot.

When questioned about whether or not Trump has delivered on that change, Graham replies, “Not for the good” because the President “plays favorites for people like himself … He doesn’t understand life around here.”

He added, “Voting for Donald Trump in 2020 would be like putting gasoline on a fire.”

Because Graham said what the New York Times wanted to hear, the old grey lady ran two articles about him– two pieces – one, an in-depth feature on Graham, another that references him – which tried to push the buyer’s remorse angle of former Trump voters.

Sadly for the bible of the progressive movement, a news organization happened to check Graham’s voting record and discovered he didn’t cast a ballot for Trump. In fact, he didn’t vote at all in 2016. Maybe that’s why he looks so sad.

So the guy from Pennsylvania who said he voted for Trump and now regrets it..

Mark Graham, who Democrats are putting in campaign ads against the president..

You’d expect Democrat PACs to run dishonest videos in an effort to drive their voter base to the polls. You might even expect the local media to fail in their due diligence to run a background check on people they feature in their stories.

But the New York Times? The New York freakin’ Times? Well yeah, they will run anything that is anti-Trump

In both pieces, the Times was forced to issue a correction.

“After this article was published, local news media reported that Mark Graham, a voter featured in the American Bridge ad campaign and another article by The Times, did not vote in the 2016 election,” they wrote. “The Times has confirmed those reports.”

Pro-tip: Maybe confirm his comments and what he claims to be before running multiple articles on him.

This is a huge error that makes the "bombshell" story significantly less important.

Once again, the corporate media shows its low standards. pic.twitter.com/um2nSHuK07

We’d like to say this kind of thing by the New York Times is a rarity, but it isn’t.

This past January, they had to issue a significant correction to a story that seemed to insinuate proven collusion between former Trump campaign manager Paul Manafort and the Kremlin.

And perhaps most famously of late, the Times was forced to retract an editorial that blamed Sarah Palin for a mass shooting in Arizona in 2011, a conspiracy theory that was debunked almost immediately after the heinous act was carried out.

Palin sued the New York Times for defamation over the ‘fake news’ reporting in 2017, and the case was revived recently after a decision in her favor.

Perhaps if they stopped concluding that all Republicans are evil before reporting, and gathered facts instead, they could restore their image. But that gets filed under fantasy next to unicorns, monsters under the bed, and Adam Schiff being honest.

Until then, the only appropriate places for the New York Times is the bottom of a garbage can or lining a birdcage.