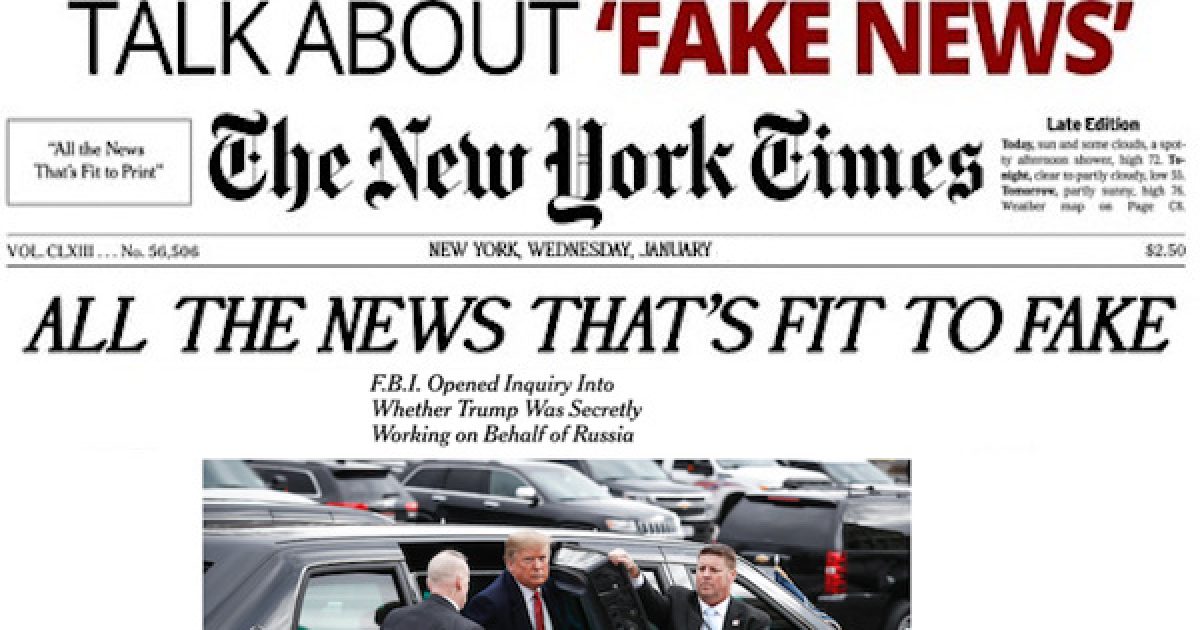 The chorus of reaction to the New York Times’s “bombshell” story on 11 January (see here as well), which says the FBI launched an investigation of Donald Trump after he fired James Comey in May 2017, has ranged from quizzical to indignant.

Some observers are just tired of the whole game, and see nothing new here except fresh, not-terribly-interesting evidence of perfidy in the FBI.  Others – the anti-Trump crowd – see the new vindication of their preexisting certainties about Trump.

Still, others are disgusted by the apparently baseless hounding of Trump and misuse of taxpayer-funded resources.  (Both Democrats and Republicans had bayed for Comey’s blood at various times over the preceding 10 months; Comey’s tenure was problematic, to say the least, and wasn’t getting any less so in the days leading up to his departure.  It is ridiculous to suggest that it took a Russian plot to get him fired.)

But what no one seems to be doing as yet is sanity-checking the story’s central proposition.  Here it is, from the sixth and seventh paragraphs of the article (emphasis added):

The criminal and counterintelligence elements [of the reported probe] were coupled together into one investigation, former law enforcement officials said in interviews in recent weeks, because if Mr. Trump had ousted the head of the F.B.I. to impede or even end the Russia investigation, that was both a possible crime and a national security concern. The F.B.I.’s counterintelligence division handles national security matters.

If the president had fired Mr. Comey to stop the Russia investigation, the action would have been a national security issue because it naturally would have hurt the bureau’s effort to learn how Moscow interfered in the 2016 election and whether any Americans were involved, according to James A. Baker, who served as F.B.I. general counsel until late 2017. He privately testified in October before House investigators who were examining the F.B.I.’s handling of the full Russia inquiry.

This proposition is absurd on the face of it.  The president fired Comey out in the open, and there were some officials in the FBI, starting with Deputy Director Andrew McCabe, who would know whether Trump exerted any form of pressure on them, before or after Comey was gone, to “stop the Russia investigation.”

Whether he did or didn’t, the Russia investigation – which Trump had known about since January 2017 – didn’t stop.

But it is evident that the way to find out “if the president had fired Mr. Comey to stop the Russia investigation” was to ask McCabe and other top FBI officials.  Perhaps the added inconvenience of a phone call to the Justice Department would have been involved.  The Trump Oval Office giving directions in that regard, or even just exerting suspicious pressure for an implied purpose, was the nature of the evidence that would be sought.

To find that evidence, you wouldn’t creep around spying on “Trump and Russians. ” You would walk through the office doors of “the top officials of the FBI” (or potentially the Justice Department) and ask them straightforward questions.

Perhaps the story’s proposition is really that FBI staffers were worried Trump would wait until a new director was appointed and have that director shut down the Russia investigation.  If so, the story doesn’t have that refinement spelled out in it – a significant oversight, given the foolishness of the existing narrative’s premise.

Moreover, two other pieces of information, directly from the story, militate against deducing that it was all about staff worries focused on the next FBI director.

One is this statement about the mindset among staffers at the time:

The decision to investigate Mr. Trump himself was an aggressive move by F.B.I. officials who were confronting the chaotic aftermath of the firing of Mr. Comey and enduring the president’s verbal assaults on the Russia investigation as a “witch hunt.”

A vigorous debate has taken shape among some former law enforcement officials outside the case over whether F.B.I. investigators overreacted in opening the counterintelligence inquiry during a tumultuous period at the Justice Department.

This indicates impetuous decision-making in an atmosphere, we are to believe, of “chaos.”  The officials weren’t making their decisions from a long-headed perspective that would game out what a new director might do.

The other piece is this point, evergreen in all Russiagate reporting:

No evidence has emerged publicly that Mr. Trump was secretly in contact with or took direction from Russian government officials.

The complete lack of any evidence would presumably have been even more pronounced before a targeted probe of Trump, and any potential Russian contacts began.  In other words, the FBI staffers in May 2017 didn’t have any evidentiary basis for probing Trump for secret contacts with Russians.  They had nothing to go on but inchoate terrors about what the firing of Comey meant.

This makes them sound much thicker than the millions of ordinary Americans who judged accurately what the firing of Comey meant: that Comey was something of a weasel whom both Democratic and Republican leaders had criticized for significant lapses in a highly sensitive and responsible position.  Besides being brow-furrowing coy with Congress, and ham-handedly managing to over-politicize the Hillary Clinton emails “matter” – twice – Comey had leaked sensitive information about discussions with the president to the media shortly before he was fired.  It was time for him to go.

There just wasn’t enough mystery about the firing of James Comey to warrant a probe of Trump’s intentions that went beyond a visit to Andrew McCabe’s office.

Or, if there was, the problem wasn’t with Trump; it was with staff communications and trust inside the FBI.

To end with, here’s a selection of tweets that appear better premised and more informative than the NYT story.

This one tells its own story (shifting the food for thought to the halls of DOJ):

A useful reminder of a contemporaneous assessment:

FBI opens counterintelligence probe of Trump and then a few days later, Peter Strzok texts that he's concerned "there's no big there there" in collusion investigation. https://t.co/rX0aGnCv1b via @dailycaller

Here’s an assumption about the motive for the NYT story — especially its out-of-left-field timing — that has a high probability of being accurate:

There’s ZERO DOUBT in my mind that someone in the DOJ or FBI leaked that story to The NY Times about the Trump witch hunt in order to try get ahead of some damaging reveals in the IG investigation and the FISA redactions.

Sen. Lindsey Graham (R-S.C.) said Sunday that he intends to ask FBI Director Christopher Wray whether the bureau opened a counterintelligence investigation regarding the possibility that President Trump was a Russian agent.

The senator, who serves as the chairman of the Senate Judiciary Committee, called a New York Times report that the FBI launched an inquiry into whether Trump was working for Russia after the president fired former bureau chief James Comey “astonishing,” but cast skepticism on its findings.

“I, for one, don’t trust what I read in The New York Times,” he said on “Fox News Sunday,” arguing the source of the story may have an agenda.

“Having said all that, I‘m going to ask the FBI director was there a counterintelligence investigation opened up regarding the president as being a potential agent of the Russians,” Graham continued. “I find it astonishing, and to me it tells me a lot about the people running the FBI, [former Deputy Director Andrew] McCabe and that crowd.”

“So if this really did happen, Congress needs to know about it,” he continued. “And what I want to do is make sure how could the FBI do that? What kind of checks and balances are there?”