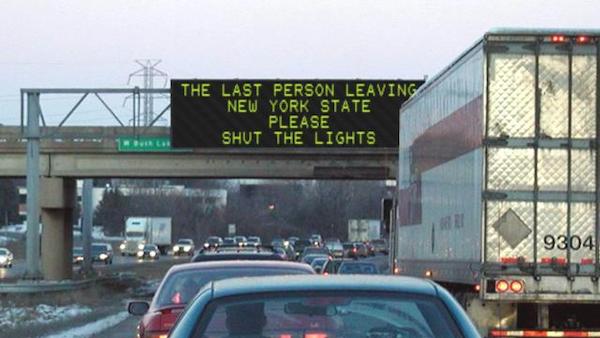 New York State is famous for so many things; Niagara Falls, The Empire State Building, Erie Canal, and Montauk Point, just to name a few. But for many of us who live in the Empire State, the most famous parts of our home State are a bordering on socialist state government, a tyrannical governor who doesn’t believe in the Bill of Rights, and an oppressive tax burden. So it’s not a surprise that more people move out of the People’s Republic of  New York over the last year than from any other state. NY population drain

According to estimates released by the US Census Bureau, some 126,355 people hightailed it out of the Empire State between July 2019 and July 2020, a dip of 0.65 percent, the preliminary figures show.

The estimates are based on the 2010 Census, and the official 2020 Census results will be released next year, along with a new legislative map.

(…) If the numbers hold, New York could lose one seat, dropping to 26, according to an analysis by William Frey, chief demographer for the Brookings Institution, the New York Times reported.

That would leave the Empire State with fewer seats than Florida for the first time ever, the report said.

One might think this is a new trend, possibly caused by  Governor Cuomo’s attempt to use COVID-19 to kill every senior citizen in the state.  But a report released in 2009 indicates that New Yorkers have been running from the states’s burdensome taxes for at least the past two decades.

“From 2000 to 2008,  New York experienced the nation’s largest loss of residents to other states—a net domestic migration outflow of over 1.5 million, or 8 percent of its population at the start of the decade. Households moving out of New York State had average incomes 13 percent higher than those moving into New York during the most recent year for which such data are available. In 2006-07 alone, the migration flow out of New York drained $4.3 billion in taxpayer income from the state” [Most of that exodus came from NY City where high city taxes pile onto the high state taxes.]

How bad are the NY State taxes? VERY! 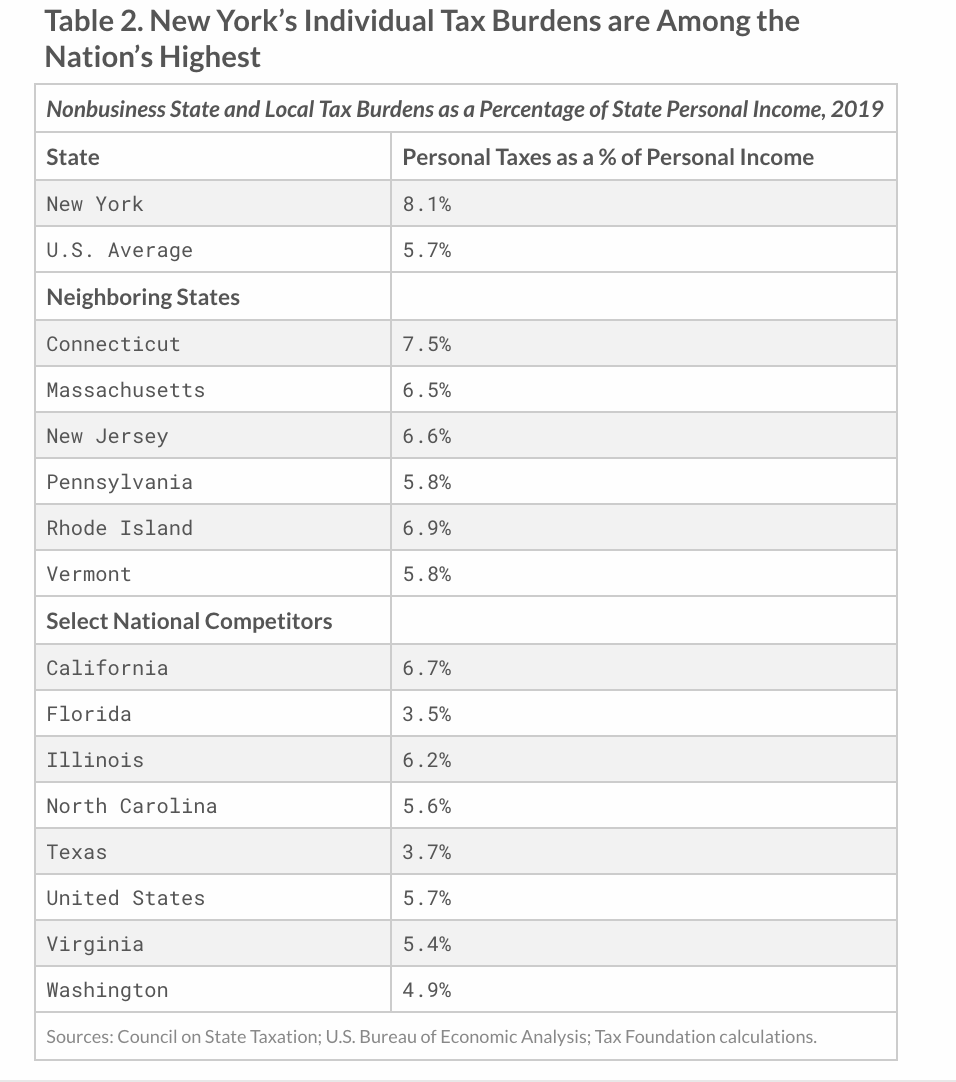 Twenty years ago, New York had five more congressional representatives in the House. A total of thirty-one in the House and a total of thirty-three electoral college votes. If the Brookings Institution prediction holds, those numbers will drop to 26 and 28.

The total number of members in the House and electors in the electoral college does not change. In other words, the loss of Congressmen and Electoral College votes translates into a loss of political power for the Empire state.

Add to that the fact that New York’s needs are secondary to one of the state’s US senators as he has been vying to become the Senate majority leader since long before he was promoted into leadership. In other words, his party’s base is more important than the needs of his constituents. The State’s junior Senator is an imbecile who can’t think for herself. Therefore, she does whatever the far left tells her to do.

The bottom line is that NY State’s representation in both houses of congress is severely diminished–the Empire state is congressionally screwed.

But it’s not just the rich leaving—it’s the middle-class taxpayers also.

NY State is in an “uncontrollable loop.”  Taxes are too high, so some of its best taxpayers have left the state, causing a revenue gap. To make up the gap, they raise taxes… and it continues. Unless the state learns to cut spending and lower taxes, the state’s decline will continue.