No Wonder Why Cuomo Rejects An Independent Investigation 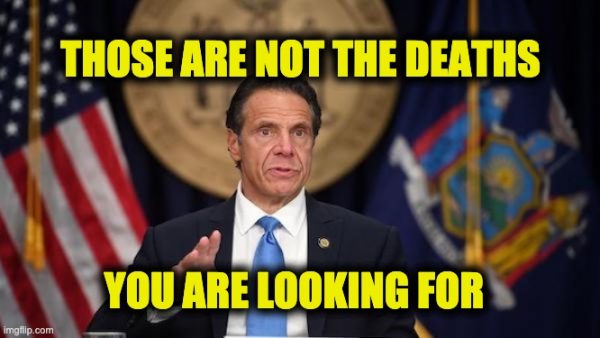 As described by the Associated Press:

Riverdale Nursing Home in the Bronx appears, on paper, to have escaped the worst of the coronavirus pandemic, with an official state count of just four deaths in its 146-bed facility.

The truth, according to the home, is far worse: 21 dead, most transported to hospitals before they succumbed.

“It was a cascading effect,” administrator Emil Fuzayov recalled. “One after the other.”

New York’s coronavirus death toll in nursing homes, already among the highest in the nation, could actually be a significant undercount. Unlike every other state with major outbreaks, New York only counts residents who died on nursing home property and not those who were transported to hospitals and died there.

Per the A.P. report, the real number could be thousands higher than the “official” count. But Gov. Cuomo’s administration has refused to reveal what the number would be if NYS nursing home deaths were counted the same way as other states.

Since May, federal regulators have required nursing homes to submit data on coronavirus deaths each week, whether or not residents died in the facility or at a hospital. Because the requirement came after the height of New York’s outbreak, the available data is relatively small. According to the federal data, roughly a fifth of the state’s homes reported resident deaths from early June to mid-July — a tally of 323 deadovi, 65 percent higher than the state’s count of 195 during that time period.

If that 65% was the same since the beginning of the pandemic, the death toll would be over 10,500 or 4k more nursing home resident deaths than the Cuomo has admitted.

At a Monday news conference Monday, Gov. Cuomo bragged that N.Y.’s nursing home CoronaVirus deaths as a percentage of the total deaths was low compared to other states,

But that low percentage may a result of N.Y.’s unique way of counting.  Per the A.P., NY’s nursing home ChinaVirus deaths as a percentage of the total deaths from COVIS is around 20%, compared to the neighboring states Pennsylvania at 68%, Massachusetts at 64%, and New Jersey at 44%. Averaging out the 43 states that release their data, 44% of total U.S. CoronaVirus deaths are nursing home deaths. In July, the New York Times reported that 43% of COVID deaths in the United States were connected to nursing homes, so the number seems to be in that area.

Why is New York’s percentage so low? Well…based on the evidence, the numbers are bogus.

On March 25, 2020, he issued an order directing nursing homes to take in patients that already had the highly contagious coronavirus. “No resident shall be ­denied readmission or admission to N.H. solely based on a confirmed or suspected diagnosis of COVID-19,” he then failed to reverse the directive for six weeks as deaths mounted.

Usually confirmed or suspected cases of the Wuhan Virus would have otherwise been sent to Hospitals. But thanks to the Cuomo order, those cases were sent to nursing homes infecting other patients, leading to more nursing home Corona cases. Within a week after Cuomo’s order, the Hospital ship Comfort arrived in N.Y. Harbor with 1,000 beds and construction began for a field hospital in N.Y.’s Central Park. Both went relatively unused despite that nursing home patients could have been transferred to those safer environments.

Cuomo first blamed the deaths on the old people themselves, followed by blaming the deaths on infected staff members who spread the virus, and eventually, even though he independently gave the order, Cuomo said President Trump made him do it.  On the bright side, he hasn’t yet blamed Satan.

Sadly, as his administration covers up the real death toll, Cuomo refuses an independent investigation that may reveal the actual total. But a more crucial reason for an independent would be to gain a full understanding of what happened in N.Y. State and what safeguards were needed to prevent the nursing home carnage from ever happening again.

Andrew Cuomo doesn’t care. After all, what’s preventing future deaths, when compared to admitting he made a mistake? His immense ego wouldn’t be able to deal.

My friend Jazz Shaw has additional insight into the NY COVID nursing home fatality numbers at Hot Air, give it a read.