Nunes On Spygate: The Two Anti-Trump ‘Parallel Tracks’ Began In 2015 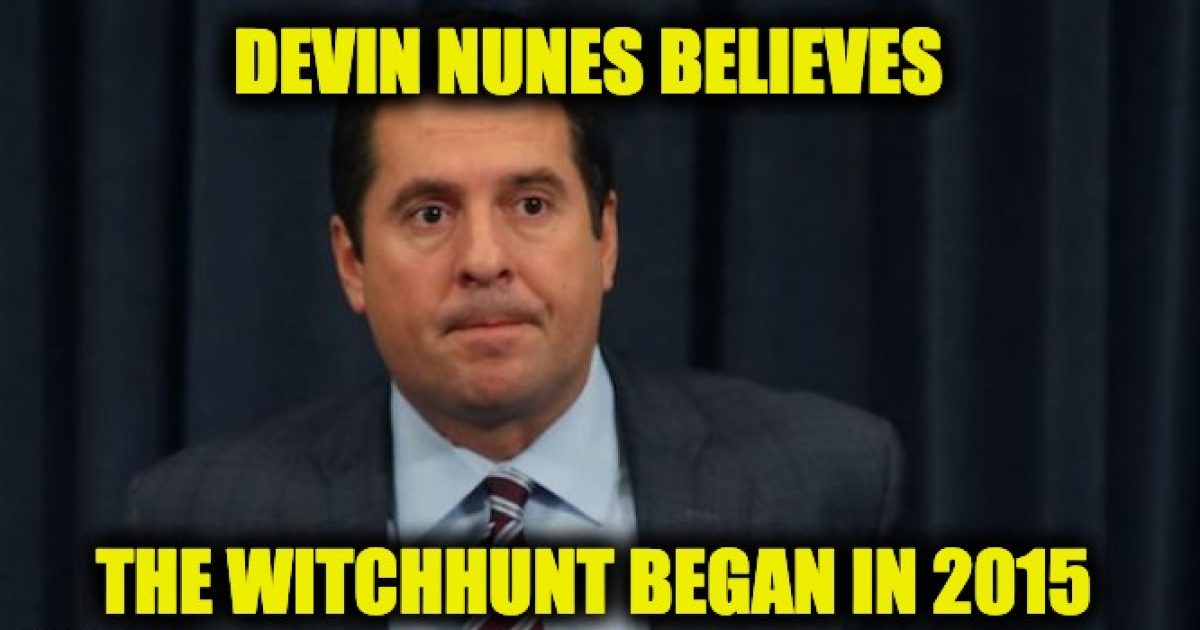 Devin Nunes (R-CA) had a wide-ranging interview with Maria Bartiromo on Sunday in which he made several important observations.  Here I want to focus on two of them. The whole conversation is worthwhile, but to get the gist for following the discussion in this post, you can start the video below around the 9:00 mark (video below).  We will be discussing the later comments first, which start at about 11:15.

Nunes refers in this passage to two “parallel tracks” by which the Democrats were waging a campaign to – in short – spy on and find a way to undermine Trump’s candidacy for president.  One track was what Nunes calls the “FBI investigation.”  The other was the effort by Hillary Clinton and the DNC to come up with defamatory information about Trump and package it as a narrative for adverse media coverage.

I put the term “FBI investigation” in quotation marks because that’s how Nunes refers to it.  I believe it was more than an FBI investigation, and that it’s increasingly misleading to characterize it that narrowly.  The evidence is piling up that there was significant, catalytic and instigating involvement by John Brennan and foreign actors, and meaningful participation by people at the State Department.

That is particularly the case if we fold in Nunes’s key point about the “parallel tracks,” which is that they didn’t start at the end of July 2016.  They started much earlier.  Nunes believes it was in 2015, and as regular readers know, I think there’s a good case for that.

Here is the crucial passage, starting with a question from Bartiromo about what the authors of the Russiagate narrative were actually doing.

Bartiromo: Did they just make it up?  I mean, they just, they knew that Russia’s been trying to undermine the West for decades, and they just inserted Donald Trump in there?  To stop him?

Nunes: Well, I think there – there’s – let me just get to the heart of what we have yet to answer that I hope the Department of Justice can answer under the U.S. Attorney out of Connecticut.  And that is this.

There were two parallel operations that were running at the same time that I believe started in late 2015, early 2016.  One is, the FBI was running an investigation into the Trump campaign.  Not in July of ’16 like they said, they’re lying about that.  It clearly started in 2015 or early 2016.

At the same time, you had the Clinton campaign and the Democratic Party running an operation having the, their bagmen, Fusion GPS, they’re both running an investigation on parallel tracks.

The thing that we don’t know, that we need to get to the bottom of is, when did those tracks become one and the same.  You know, were there people that were working together, with the FBI, and Fusion GPS, and the Clinton campaign? We know they – we know at some point they knew about Christopher Steele – my guess is, they knew this a long – early on in the process, probably at least January, February, March of 2016 –

Nunes: And so think about that.  It’s banana republic stuff.

How early did the two tracks, “merge?”  It may be that they never had to merge.  If we recognize that the “FBI investigation” never had the character of a real investigation (and it didn’t; Andrew McCarthy – without initially intending to – has made that case in elaborate detail), we are freed to recognize in turn that it was not an investigation based on a law enforcement predicate at all.

It was, instead, use of law enforcement tools for a political operation.  And that means it could have started out “merged” from the beginning, and has only appeared separate to our eyes because it has taken so long to unearth the clues about it, and almost all of the ones we know about are from March 2016 or later.

Don’t think we know enough yet to confidently state a date from which we could hypothesize that the multi-track operation against Trump began.  But I think we ought to give a serious look at the extraordinary and secretive meeting opportunity between Bill Clinton and John Brennan at Jackson Hole during the first three days of August in 2015.

There was never an obvious reason for Brennan to be at the conference they both attended – Brennan, bizarrely, in an Air Force C-40B that remained idle, at his disposal, for three days, while he was clearly there for extracurricular purposes unrelated to his job as CIA director.  C-40Bs are not so plentiful that this is a routine occurrence. Rather than rehash the earlier article on this event; at your leisure, please read the post here.

There is another reason Nunes’s Sunday interview grabs attention in this regard, and it also has a specific echo in the August 2015 conference at Jackson Hole.  It’s from the second passage I want to highlight, and it comes just before Nunes and Bartiromo segue to the comments about the parallel tracks.

At about the 9:55 mark in the video Nunes says  those pushing the Russia hoax are “possessed”: that they are “pretending like something was wrong here, that Trump was colluding with the Russians”:

Nunes: I mean, there’s no evidence of this, right?  So, the only thing they had on Russians was the Steele dossier, right?  And then Joseph Mifsud, who you’ve talked about on your show.  Those are their Russians.  But guess what, they’re fake Russians. They’re phony Russians, they’re “Fusion” Russians, they’re Russians that only the Democrats knew about.  And the Democrats were the ones that were colluding with Russians.  You just can’t make this up…

This is such an important point, and it’s one I’ve been making from very early on in the analysis of Russiagate.  The authors of the Russiagate narrative have repeatedly used their own contacts with “Russians” – and with others – to try to construct narratives about wrongdoing by Trump.

The extraordinary meeting at Jackson Hole was followed by this very pattern, but it didn’t involve Russians in that case.  Ultimately, the pattern itself seemed to go nowhere.  But it is a useful illustration that mirrors the development of the Russiagate narrative against Trump.

In 2015, the host of the conference attended by Clinton and Brennan – a Clinton Foundation donor and billionaire philanthropist (and physician), Dr. Patrick Soon-Shiong – had enterprises going with the involvement of the Obama administration (Vice President Joe Biden, in fact) and the Clinton Foundation.  After Trump won the 2016 election, a weird media campaign flared from November 2016 to January 2017 touting Soon-Shiong first as a candidate for a position in the Trump administration, and then – turning on a dime – as a shady character who was being looked at for questionable practices.

Trump didn’t select Soon-Shiong for an administration role, and the attempt to connect him to Trump seemed to run out of steam in early 2017.  But for a few months, Google keyword searches show the same kind of evidence – of a concerted media campaign to link Trump with a character whom “only the Democrats knew about” – that was so observable in the months from the Democratic National Convention in July 2016 to the Trump inauguration in 2017.  In the latter case, a media drumbeat pounded out soundbites about a cast of Russians whom the Democrats were involved with, attempting to connect them to Trump.

The pattern had jumped out at me immediately when the news first emerged that Fusion GPS had been behind the Steele dossier.  Fusion founder Glenn Simpson had covered the antics of all the same Russians who peopled the Steele dossier when he was at the Wall Street Journal – and what he obviously knew was who at the DOJ and FBI worked their cases, and very probably what Democrats were involved with those same Russians.

When we learned from Nellie Ohr’s congressional testimony that she, a Russia specialist, was doing contract work for Fusion in the fall of 2015, months earlier than the April-May 2016 timeframe originally suggested, it became clear that some key pieces were in place for Fusion’s role in an anti-Trump campaign to have been conceived in 2015.

The essential piece is that many of the participants in manufacturing the Russiagate narrative were thus connected, and potentially talking to each other in precisely the appropriate context, in the fall of 2015.  Simpson didn’t just know the Ohrs, Nellie and Bruce, and some career Russian crime specialists at the FBI like Michael Gaeta.  He had worked for Obama’s Democratic campaign organization – doing oppo research on Mitt Romney – in 2012, so he and some of the key DNC operatives knew each other.  He had worked for longtime cronies of Hillary Clinton while she was at the State Department, doing oppo research on behalf of a UAE sheikh who was cultivating favor with Clinton (another well-worn pattern).  And Simpson’s wife, Mary Jacoby, had family connections to the Clintons in Arkansas that went back for decades.

Simpson had also known Christopher Steele for years; indeed, Fusion and Steele’s Orbis Business Intelligence firm had contracted for work together as early as 2009. Being a longtime associate of Simpson’s means that Steele’s network of British associates was also linked in by the fall of 2015. Another way of saying that is that, whenever the enterprise started, the Steele network in the UK was already there.  The Brits didn’t just wander in in March or April of 2016.  The potential was there long before April-May 2016 for the humans to confer, whatever may be lacking – so far – in the known paper trail.

And in this case, I recommend looking not at Steele, but at the network.  It’s increasingly evident that Steele himself wasn’t a significant player; instead, he could usefully be plugged in where British actors with greater horsepower needed to deploy him.

Which brings us back to Brennan’s involvement, for which we have a few elliptical references to “alarming” intelligence reportedly provided by the Brits – some of it as early as late 2015 – and Brennan’s very active role in the summer of 2016 setting up an Obama-approved task force and buttonholing senators on Capitol Hill to sell them the Russiagate narrative.

But we also have Brennan’s peculiar visit to the FSB in Moscow in mid-March 2016, at a time absolutely suffused with Spygate events.  And we have his meeting in Jackson Hole, Wyoming 1-3 August 2015 with – of all people – Bill Clinton, at a conference, there was no apparent professional (or even personal) reason for Brennan to attend.  There was also a government plane on a tarmac involved (smile emoticon).

We can hope that U.S. Attorney John Durham is coming up full-handed in his probe of the CIA as well as the FBI.  I would bet on two things at this point: that the parallel tracks Devin Nunes refers to never actually needed to merge, and that we’re going to be hearing more about the role of John Brennan.