Norway, The Most Anti-Semitic Nation In Europe May Ban Circumcision Till Age 16 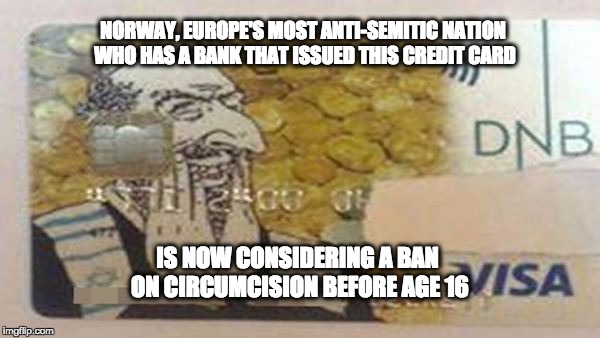 On Shabbos, the Progressive Party in Norway, the smaller of two parties within the ruling government coalition (with 29 of 169 parliament seats), announced that it intends to initiate a law banning circumcision in the country for males under the age of 16.

The Jerusalem Post reported that supporters of “the Norwegian bill, which was discussed during the party’s national gathering over the weekend, claim that circumcision constitutes mental and physical harm to children and constitutes a serious violation of children’s rights.” While it is true that after my Bris I couldn’t walk for a year, most babies don’t start walking till they are about a year old, so  in all probability, the real rationale behind this proposal is that Norway is considered by many as the most anti-Semitic and anti-Israel nation in Europe.

Historically movements to ban circumcision are centered in attempts to move the Jewish commitment from God and refocus it on man. In fact, almost every campaign to destroy the Jewish people started with a ban on circumcision, followed by a ban on kosher slaughter and finally a ban on teaching Torah (Norway reversed the order, they.began with Kosher slaughter).

The second paragraph of the original 1814 constitution of Norway read:

“2. The evangelical-Lutheran religion remains the State’s public religion. Those inhabitants who profess to it, are obliged to raise their children in the same. Jesuits and monastic orders may not be tolerated. Jews remain excluded from admission to the kingdom.”

That paragraph was repealed in 1851, but that didn’t mean the country’s attitude changed.

Schechita (Kosher slaughter of animals) have been banned in Norway since 1930. Technically the ban is against any method of slaughter that does not involve stunning the animal first.

According to the former Chief Rabbi of Norway Michael Melchior,” I won’t say this is the only motivation, but it’s certainly no coincidence that one of the first things Nazi Germany forbade was kosher slaughter. I also know,” that during the original debate on this issue in Norway, one of the parliamentarians said straight out, ‘If they don’t like it, let them go live somewhere else.'”

Interestingly while Norway has banned schechita which is humane, ignoring international agreements the government allows whaling, which involves the harpooning/slow death of whales.

It’s come to the point that in Norway “Jew” is used as a slur name.

Norwegian media often spreads anti-Semitic canards. For example, in On January 12, the Norwegian newspaper Aftenposten published an article about Jared Kushner, US President Donald Trump’s son-in-law and his senior adviser: “The Jew Kushner reportedly pushed for David M. Friedman as the new ambassador to Israel”, Aftenposten wrote. The newspaper had later to apologize for calling Kushner “the Jew”.

Johan Galtung, the Norwegian sociologist nicknamed the ‘father of peace studies’, who made anti-Semitic and anti-Israeli remarks while lecturing at the University of Oslo claimed that a possible connection exists between the terrorist responsible for the massacre of children in Norway and the Mossad. He’s also claimed,  ‘The Jews control U.S. media, and divert it for the sake of Israel,’ wrote Galtung in an article published in Norway.”

A popular form of modern Antisemitism is portraying the Israeli govt. or IDF as blood thirsty or Nazis. For example, Dagbladet, a newspaper of the Norwegian Left, published a cartoon in which Palestinian terrorists leave an Israeli prison with the German motto of the Buchenwald concentration camp: “Jedem Das Seine,” (to each what he deserves).

This past November “Utbildningsradion” the Swedish Educational Broadcasting Company, aired “The Occupation of the American Mind: Israel’s Public Relations War in the United States,” The movie suggests that the “Israel Lobby” (a nice way of saying the Jews) control public opinion in America.

In 2015 one of Norway’s largest banking firms, DNB, issued a credit card featuring the image below (until they got caught). 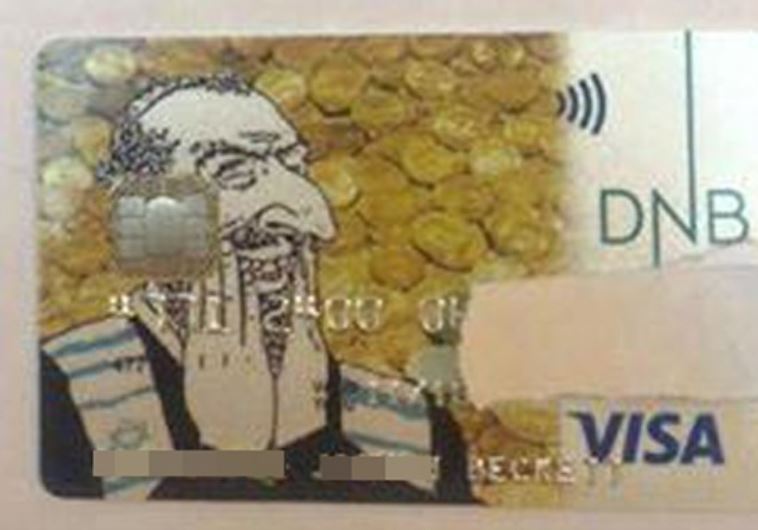 Now I don’t want to give the impression that the hatred only comes from the media, the Norwegian academia and even the government share in the fun

In a 2009 letter to Norwegian Prime Minister, Jens Stoltenberg, the Simon Wiesenthal Centre’s Director for International Relations, Dr. Shimon Samuels, wrote of the growing Norwegian academic boycotts of Israel as  “a new stage in Norwegian incitement to Jew-hatred, the outrageously anti-Israel bigotry of the Middle East seminar at the Norwegian University of Science and Technology (NTNU) in Trondheim.”

“The virus of antisemitism in Norway’s media, unions, NGOs and even government circles is now infecting academia. NTNU has deformed free and open scholarly discourse based upon mutual respect into a campaign of hate propaganda, led by masters of disinformation who exploit their academic credentials to call for boycott of their colleagues who happen to be Israeli. Most disturbing is the role of NTNU’s [Norwegian University of Science and Technology] Rector, Torbjorn Digernes, who has declared his support for this campaign.”

In 2014 the Norwegian Ministry of Finance excluded Israeli firms Africa Israel Investments and Danya Cebus from its Government Global Pension Fund. It was one of the most significant BDS’ victories, since that fund, which invests the Nordic nation’s oil and gas wealth in foreign stocks and bonds to save for future generations, holds more than 1 percent of all global stocks. The Norwegian EL & IT union, which represents over 30,000 energy and telecommunications workers, then adopted a boycott of the Histadrut, Israel’s labor union.”

Make no mistake about it, this proposal to ban circumcision, has the same purpose as the paragraph in the 1814 constitution described above—keep the Jews out (despite that Jews are a very tiny minority in Norway,  the WJC estimates about 1,200 Jews in the country).

This proposed bill hits one of the most basic provisions of Jewish practice. Circumcision is not a rabbinical interpretation…it is a direct order! Just read Bereishit Chapter 17, verses 9-11. It’s right there in ink and parchment.

Perhaps the Progressive Party in Norway is trying to ban circumcision because they themselves cannot be circumcised (there is no end to those pricks).  Either way this new effort by Norway sends a clear message to its Jews, “Get The Hell Out!”