Did Northam's Face Turn Red With Anger Instead Of Its Usual Racist Blackface? 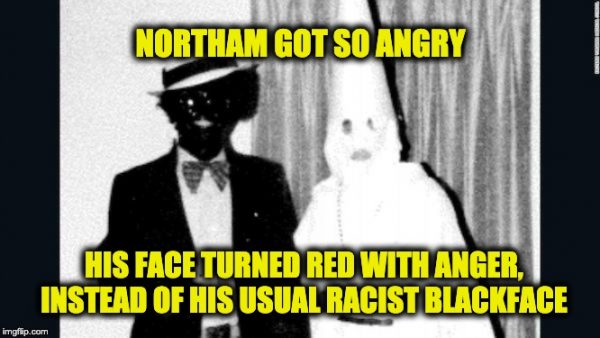 Gov. Northam loses! His assault weapons ban failed in Virginia on Monday, as some members of the Democrat party bailed on the proposal. The bill was being debated in a Senate committee meeting. The Senators voted to shelve the issue for 2020 and have the State Crime Commission “study” the item. Studying the problem is the politician’s way of avoiding a vote on something controversial. Cheers erupted in the meeting hall when the vote was revealed. Northam’s face must have turned red with anger, instead of its usual racist blackface.

Four Democrats joined with Republican Senators to stop the “assault weapons ban” (HR 961). Though HR 961 was a watered-down version of the original bill, it would have banned sales of particular semi-automatic weapons, the sale, and possession of magazines larger than 12 rounds.

Numerous gun control bills have already passed the legislature, which will make obstructions for Virginia gun owners across the board. They are limited to one gun purchase per month, “universal background checks” on all purchases, a red flag law, and a law that allows localities to ban guns within their jurisdictions such as public parks, buildings, etc.

Virginia has been the epicenter of the gun grab frenzy since the Democrats won the election and flipped the legislature to Democrat. No thanks to Michael Bloomberg, who poured millions of dollars into the state to do just that. It has been entirely successful until this morning.

“He can take his money and he can keep it in New York. Virginia doesn’t want his money. He’s already tried to ‘New York’ Virginia and we’re done. We don’t like it all and that’s going to happen across the country.” VA Sen Amanda Chase to Fox

The fact that there are still “moderate” Democrats is a fantastic thought. The ban on the most popular rifle in America is not entirely dead in Virginia, it’s just “shelved” for the time being while a study is being conducted.  But it is good that 4 Democrats saw the divisiveness of such a ban and voted to stop it for now.

Gov Northam must be livid.

He claimed he didn’t want to “confiscate” the weapons of law-abiding citizens. He lied. He added money to his budget for jailing those who did not comply. His attorney general threatened law enforcement officers on numerous occasions if they didn’t enforce the unconstitutional ban. Now all of that is mute for the time being.

Virginia gun owners responded to the news of Northam’s’ failed attempt in various ways, but this one was right:

We need gun safety classes back in schools. pic.twitter.com/KliHDMSOLT