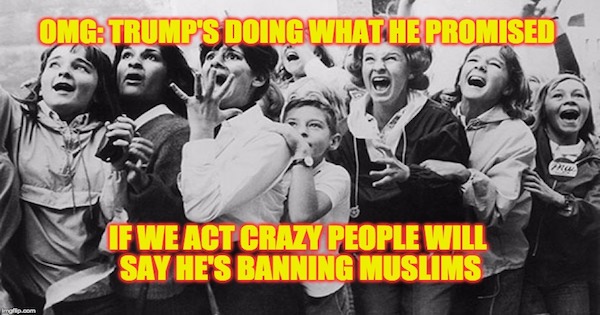 The left and their minions in the media are losing their collective mind over President Donald J. Trump’s temporary halt to immigration from a list of terror-sponsoring nations and it appears that they are trying to bully him into withdrawing his order. Thus far they are not winning… and that’s a good thing, too.

First of all, the 90-day moratorium on immigration from these troubled nations is not a “Muslim ban” nor is it something that Trump just dreamed up out of nowhere. After all, Trump merely strengthened an Obama policy with this whole deal.

The order specifically maintains that “The United States cannot, and should not, admit those who would place violent ideologies over American law,” and goes on to list the several nations Obama already flagged several years ago. That’s right, the list of nations, Libya, Yemen, Somalia, Iran, Syria, Iraq and Sudan, were already signaled out by Obama in 2015. Obama called them countries of concern.

As an aside, speaking of other presidents, the left’s favorite anti-American ex-president, Jimmy Carter, also banned certain Muslim immigrants when in 1980 he banned Iranians from entering the U.S.A. after Iran’s Islamic revolution and the Hostage Crisis.

So, before we even get into this topic, you must understand that this is not that “new” nor is it a “Muslim ban,” and the liberals making these claims are simply lying.

On ABC’s This Week, White House Press Secretary Sean Spicer reminded the host that “the Obama administration put these first and foremost” and also noted that this isn’t a “Muslim ban” despite what the critics keep claiming. Spicer pointed out that there are “46 Muslim-majority countries” not on the temporary immigration moratorium.

Spicer is 100% right. The three largest Muslim nations in the world, Indonesia, India and Pakistan, and completely untouched by this action.

Furthermore, the caps Trump put in place are only temporary. David French explained it well:

It is also obvious it isn’t a “Muslim ban” as the left keeps claiming. The word Muslim doesn’t even appear in the order.

But what about the legality of the order? Liberals also keep claiming the temporary ban is “unconstitutional” and “illegal.” Is that true?

Let’s dispense with all this business that what President Trump (and Obama, for that matter) did with this action is somehow “unconstitutional.” It is not.

The ability of the president of the United States has the power to make these policies. The power is clearly delineated in U.S. Code, Title 8, § 1182 – Inadmissible aliens.

That statute in question reads:

And if that doesn’t satisfy you, there’s the U.S. Constitution which acts to maintain the rights of all Americans in particular and in some cases people here on our soil. The Constitution does not, however, apply to all peoples outside this jurisdiction.

Article I, Section 8, Clause 4, empowers Congress “To establish a uniform Rule of Naturalization.” This gives the President and Congress the role of crafting immigration policy. According to a case in 1976, the Supreme Court said of this power, “The Court without exception has sustained Congress’ plenary power to make rules for the admission of aliens.”

In this case, the government could shut off all immigration for a period of time if it felt the need and this still wouldn’t violate the Constitution.

Others worry over “discrimination” against Muslims. But the religious test only prevents government from denying American citizens from being discriminated against over their religion. It doesn’t cover foreigners.

So, now that you have this background, let’s review the left’s hysteria on this business… and that is all it is; hysteria.

Firstly, many on the left claim that a ban on Muslims immigrating into the U.S. is a “great gift to extremists” and “creates more terrorists.”

One has to wonder why liberals are so upset that there might be a Muslim ban, though. Muslims and their handmaidens in the media constantly say Islam is a “religion of peace,” and that it is “racist” to say they are prone to terrorism. But one wonders, if Muslims aren’t prone to terrorism, why would a temporary immigration ban create more Muslim terrorists?

The left also insists that a ban on Muslims is “racist.” This is yet another hysterical claim. The fact is “Muslim” isn’t a “race” to be “racist” against.

But the hysteria is taking other forms, too. Senate minority leader, Democrat Chuck Schumer, characterized the action as nothing short of un-American. Schumer melodramatically blathered, “Tears are running down the cheeks of the Statue of Liberty tonight.

Chuck Schumer of Trump’s ‘extreme vetting’ Exec. Order: “Tears are running down the cheeks of the Statue of Liberty tonight.” pic.twitter.com/ONz3Ss6BJ5

Not to be outdone, minority leader Nancy Pelosi called Trump’s order “cruelty” saying that Trump has “mistaken cruelty for strength and prejudice for strategy.”

The screaming mimis in the media were by far worse than the partisan liberals in Congress. Newsweek’s Rula Jebreal was so ignorant as to call Trump’s order an act of “white supremacy.” And The New York Times’ Maggie Habberman lied outright saying that foreign-born terrorists don’t attack Americans here at home.

There are plenty more than that, of course. But instead of wasting time relaying the stupidity of the leftist media, let’s give some reaction by some of those affected by Trump’s action.

Take Hameed Khalid Darweesh, one of the refugees who was temporarily held at New York’s JFK airport. You might think that Darweesh would have been incensed that he was held for a few hours while the Trump administration gave him closer vetting to make sure he wasn’t a danger to the U.S.A. But you’d be wrong.

After being held an additional 19 hours, Darweesh was asked by the media what he thinks about Donald Trump. He said… “I like him.”

Another person who should know is former Navy SEAL Chris Kyle’s Iraqi interpreter, Johnny Walker. He recently spoke to IJReview.com and told them that Trump was doing exactly the right thing.

But let’s see how those in lands that are dealing with wave after wave of Muslim “refugees” are experiencing was they are inundated with these invaders.

After several years of “refugees” the Germans were rewarded when literally thousands of migrants coursed through Cologne on New Year’s Eve in 2016 raping women and attacking bystanders by the hundreds.

You don’t even have to go back a year. Just this week a women’s center in France was burned down because a bunch of “refugees” were offended by the center.

That is what you invite into your country by untrammeled Muslim immigration.