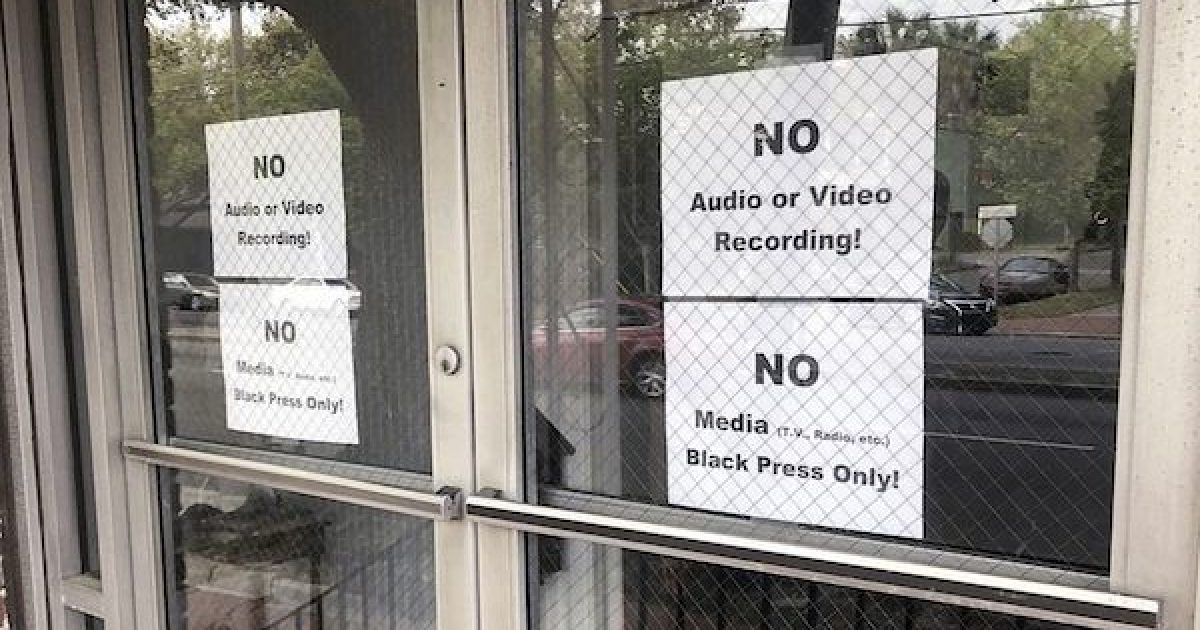 Georgia mayoral race event bars non-black reporters from entering. The organizers of the meeting at the Bolton Street Baptist Church, which was put on by Rev. Clarence Teddy Williams, reportedly posted signs stating “Black press only” on the doors of the church.

Signs at the door read “Black Press Only!”

Now if that was done to keep Jim Acosta out if the town hall-type event it would be understandable, but he was in D.C.

"Black Press Only!" Only black reporters were allowed inside a meeting to discuss the upcoming mayor's race in Savannah, Georgia. https://t.co/xLtV7zDVBw

Organizers of a meeting to discuss an upcoming mayoral race in Georgia barred reporters from attending — unless they were African-American.

The Wednesday meeting at a church in Savannah was held to try to unite the city’s black community behind a single candidate for mayor in the Nov. 5 election. Signs at the door said “Black Press Only!”

White reporters were denied entry, while at least two black reporters and the publisher of a local African-American newspaper were allowed inside, the Savannah Morning News reported . Television cameras and recording devices were also prohibited.

The newspaper said the Rev. Clarence Teddy Williams, who organized the meeting, declined to discuss the entry policy.

Mayor Eddie DeLoach is seeking re-election this fall. He became Savannah’s first white mayor in 20 years after winning the 2015 campaign. Elections for Savannah’s top office are nonpartisan, meaning all candidates who qualify end up on the November ballot.  Isn’t this considered racist? Someone should tell Councilman Van Johnson that nothing sells people on his vision of a “progressive and inclusive” city like his attending a meeting that bars reporters based on their race.

Maybe the church should lose its tax exempt status?

Uhh no they can’t. Not if they want to keep their tax status. I have a feeling that was not your opinion of churches that did not want to conduct gay marriages

Reverse racism? No, it’s still racism no matter how you spin it. Looks like we are headed toward whites only and blacks only venues. It’s truly sad that a member of the church would be the one to be this racist. https://t.co/AaTSGIAToD

One of the African American candidates knew it was wrong and felt the need to explain his presence at the event:

Fox News spoke about the other African-American candidates in the race:

Regina Thomas, a former Georgia state senator and one of the incumbent mayor’s black challengers, skipped the church gathering Wednesday. She said the meeting appeared divisive and was scheduled too early in the campaign. The deadline for candidates to sign up for the race is Aug. 23. Thomas said she also had a scheduling conflict: her Bible study group met Wednesday night.

Ms. Thomas is correct the way the meeting was set up was divisive. If a church wants to hold a town hall to allow a community to question/meet candidates—it’s excellent.  But once they start disallowing candidates and media of certain races and creeds from coming to the town hall, it’s not only divisive, but it could result in a loss of their tax-free status.