State Gets Sued for Shutting Down Second Amendment 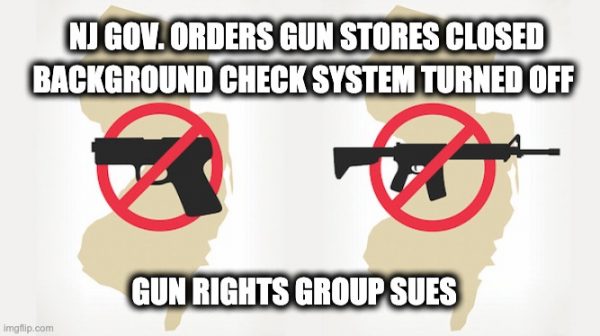 As reported here last week, China Coronavirus fears have caused a spike in gun and ammo sales nationwide. That trend has continued, as underscored by a story in the St. Louis Post-Dispatch,  Gun and ammunition sales are reportedly spiking all over the map, but there is one exception New Jersey and a federal lawsuit has been filed by one of the nation’s top firearms rights organization to change that. NJ CoronaVirus Gun Ban

In New Jersey. Democrat Gov. Phil Murphy issued an executive order that has shut down gun sales in the state and effectively suspended the Second Amendment. After the Governor’s order, the New Jersey State Police announced that it was “directing the vendor of the NICS Online Application (NICUSA) to turn off the NICS Online Services.”

But it did not take long for the Second Amendment Foundation—a national powerhouse in gun rights litigation—to act. SAF has been joined by the New Jersey Second Amendment Society in filing a federal lawsuit against Murphy and State Police Supt. Patrick Callahan, in their official capacities, seeking an injunction.

Back in St. Louis, the newspaper is reporting a rush in gun stores. The story said industry experts reported a surge in gun and ammunition sales beginning in mid-February as word of the virus spread as fast as the virus itself. Federal background checks have shot up to a reported 300 percent, and it doesn’t appear to be waning anytime soon.

One shopper identified as Victor Arrendondo told the St. Louis Post-Dispatch, “In times like these, people get desperate.”

Translation: They fall back on the Second Amendment right to keep and bear arms. That apparently goes for people who previously have supported restrictive gun control measures.

In Pineville, N.C. Brian Sisson, the owner of the Pineville Gun Shop and The Range, told WBTV, “We’ve had people come in and say with all the panic in the news they’ve decided to buy a firearm.”

At the Point Blank Range, manager John Fields told the station increasing numbers of people are taking one-on-one instruction to learn how to use the guns they’ve just purchased.

New Yorkers spooked by the coronavirus outbreak — and the government’s reaction to it — are packing Long Island gun stores to stock up on firearms and ammo amid the chaotic situation across the state.

The demand for firearms at Coliseum Gun Traders Ltd in Nassau County was so high Tuesday that manager Kevin Romano said they’re only letting small groups of people into the store at a time.

“I think a lot of people feel their rights are being infringed upon, and they want to exercise their Second Amendment right before any possible gun restrictions are put in place,” Romano said at the Uniondale shop.

“People are mostly coming in to buy shotguns and ammo, and we are pretty well stocked. There is no fear we are running out,” he added.

The New Jersey lawsuit may be a legal shot across the bow for anti-gun politicians who may think they can use this emergency to step on the Second Amendment.

“New Jersey Gov. Murphy cannot simply suspend the Second Amendment, and neither can Supt. Callahan,” said SAF’s Alan Gottlieb. “Yet, under this emergency order, that’s exactly what they’re doing. The Constitution, and federal law, don’t allow that. New Jersey may have been the first state to ratify the Bill of Rights, but they’re the last state to recognize it.”

There is no small irony in the fact that while Murphy’s order has effectively shut down gun sales in the Garden State, out in Illinois, Gov. J.B. Pritzker issued an emergency order that is actually keeping gun stores open because they are an “essential business.” Pritzker is a Democrat. SAF’s Gottlieb congratulated Pritzker the other day for keeping the gun stores and distributors open for business “for purposes of safety and security.”

There may be a lesson in Pritzker’s order for other governors who may be wondering if they “just might” get away with smacking gun owners under the ongoing emergency. Gottlieb’s group is warning them against it.